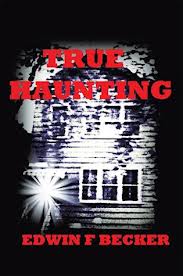 As Author Edwin F Becker points out, there were no Ghost Hunters a la TAPS in 1970. There was also no Amityville horror; at least not until 1977 when Jay Anson put pen to paper and wrote about the “alleged” ghostly problems of the Lutz family in the house where an entire family sans one was murdered.

It would not surprise me to learn that Jay Anson was not already aware of the ghostly events that plagued the Becker family via a NBC newscast that was aired both locally (where Becker and his wife lived) and nationally. Where else could he have gotten the idea? And  where Anson, admittedly, stretched the truth to breaking and beyond in search of a fast buck; Becker did not profit one cent from his haunted house experience until years later when he self-published his story.

I’d bet a pretty penny myself to say that he’s not profiting much from the sales of his story; his e-book is very affordable.

In 1970, Becker and his new wife and baby, wanted to buy a house. Finding a two-story house with two ready-made apartments already under one roof, he thought he’d found a bargain. Sure the house needed work and they needed to get rid of the “crazy” woman who lived in the downstairs apartment, but Edwin was not afraid of hard work and the “crazy tenant” was on her way out.

So what could go wrong?

Becker recounts what happened when he and his young family moved into the house in the suburbs of 1970 Chicago and the traumatic affect the property had on friends and family. He tells of the Church’s refusal to get involved and of seeking help from two (the only two in the Yellow Pages) paranormal investigative societies available.

He tells his story in a straight forward, no-nonsense manner that convinces and disturbs and (for me anyway) made the hair on the back of my neck stand-up which resulted in my deciding  to read the rest of the book in the daylight. What he does not do is embellish the events to “sell” his story. He steadfastly refused to sensationalize any of the occurrences that he and his family experienced. Hence the self publishing.

When he and his family encountered what, at the outset, seemed like odd events: a kitchen door that refused to stay shut, a mixer that refused to hang on the wall, a phone that kept taking itself off the hook and countless other things, that he found  “logical” explanations for. Or so he thought.

As the haunting began to escalate, he and his wife (who to be fair, sensed this a lot earlier than her skeptic husband) realised that the house was haunted by not one, but several ghosts.

It was Mr Becker’s sincere and plain retelling that both convinced me of the truth of his story combined with “strange” experiences that I myself have encountered that sold me on the validity of his tale.

This is a very understated book when compared with Jay Anson’s nefarious tale of the Amityville “hauntings.” You’ll find no oozing black stuff pouring out of the sockets; no overabundance of flies; no voice telling anyone to, “Get Out!” and no pigs floating outside a second story window.

What you will find is a simply written(not in a negative sense)  tale of growing fear and financial difficulties. Your heart will go out to his (then) young family and the fact that they had so few avenues of help. Before the modern “ghost busting” equipment of today and the digital revolution that enables ghost hunters to track down “spirits and demons” you had psychics and clairvoyants and the odd paranormal scientist. Oh and the clergy, if you could get them to acknowledge the problem. This was a time of real “hit and miss” ghost hunting and something that not many of the main populace knew about.

This was a great read and, as I said before, one that literally “creeped” me out. I will warn you, this is not a book for the overly imaginative. I slept with the light on after reading this book.

I’d give this a full 5 out of 5 stars for no-nonsense reporting of one family’s experience with a haunted house. Do not miss reading this book, it is a great story, even if you don’t believe in ghosts.