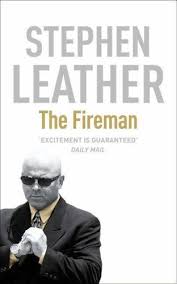 Published in 1989, The Fireman by Stephen Leather is his second book. Leather was still working as a journalist at the time so it is no wonder that his protagonist and his story are set in the world of journalism.

Fireman is the term applied to a ‘high flyer’ in the news world. They are the journalists who are sent around the world at a moments notice to cover the big stories. They are the heavy hitters, the Babe Ruth’s of reporting and as such are on call twenty-four hours a day. It is an exhausting job, but one that pays well and you have a guaranteed by-line.

The main character is the fireman that the title refers to. Or was the fireman before he got jaded and his intake of alcohol required that he be “dried out.” The rehab was paid for by the newspaper he works for and he has slid down the professional ladder to second string crime reporter. One step below an overpaid youngster.

The paper is being taken over by computers and their workforce is dwindling. The fireman gets a call from Hong Kong where his sister Sally is working as a free-lance journalist. She has fallen from a tall building and the Hong Kong police are calling it suicide. He now needs fly to Hong Kong and sort her things out and explain to the police that Sally would never kill herself.

Set in the days before Hong Kong was “given” back to China, the colour and the pace of the place is brilliantly painted for the reader. The ex-pats and their comfort in a self-imposed exile from England are just as colourful and also sad. These are not life’s movers and shakers, rather they are the ‘also rans’ who have managed to find a place higher up on the social ladder.

That Stephen Leather has a solid background in journalism is apparent in how well he describes the setting of the newspaper’s working environment. I worked for a local rag in the early 90’s. Not as a journalist, but as a driver. As the paper was more localized I was privy to how a lot of things worked and got to see how every thing came together to produce the paper.

But, even if you haven’t worked in that arena, you can feel the authenticity of the characters and the pecking order as laid out by Leather in his book.

Written in the first person, you never learn the protagonists name. When I went to write this review I ‘skip read’ through the book repeatedly to find his name. Not there. This, I have been lead to understand, is a common device with Mr Leather in a few of his books. It does not detract from the story, if anything it helps give the impression that you are living the action right along with the hero.

And there is a lot of action to live through. You follow him every step of the way as he tries to find out who was behind his sister Sally’s murder. It is entertaining and very fast paced. As this was his second work to be published, it lacks a lot of the polish that his later books have. But the rough edges don’t detract from the story and it is still a good read.

In an interview, Leather has stated that he was not too happy about the family circumstances that his editor insist that he put into the story. I can empathise with him as that part of the story stuck out like a sore thumb and did feel “tacked on.” I won’t say what it is but I do believe that you’ll find the same when you read the book.

When the villain is finally tracked down and dealt with it is one of the best cases of poetic justice I’ve seen. I enjoyed my leisurely perusal  of vintage Stephen Leather and I am looking forward to reading some of his other earlier books.

While this book is not in the same league as Fair Game or Nightmare, Stephen still shows that splendid ear for dialogue that makes his books stand out so much from other authors.

I would highly recommend reading The Fireman. It will entertain you and hold your attention.

3 thoughts on “The Fireman by Stephen Leather…Vintage Leather”