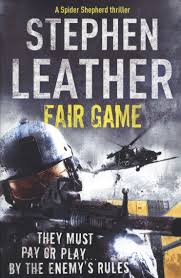 Fair Game, published in 2011 by Hodder & Stoughton, and written by Stephen Leather is just what an action thriller should be; Fast paced, gritty, violent, hard and feature a main protagonist that your readers can root for.

This is only the second book I’ve read by Stephen Leather and it has convinced me that I need to read all his books. Having read his latest book in the Jack Nightingale series, I was already hotly anticipating the next in that series and I’m trying to go back and read Nightingale’s entire saga in preparation for the next instalment.

I am now a Dan ‘Spider’ Shepard fan.

Fair Game, touted as the eighth in the Spider Shepard series by Amazon, starts out hard and never lets up. I have written about Leather before in a review I did on his last Jack Nightingale series (check the afore highlighted Nightingale link) and I am no less impressed with Leather’s creation of Spider Shepard.

As with the Nightingale book, Leather’s ear for dialogue and accents and topical language is still top-notch. Each character is brought to living, breathing life via their conversations. The overleaf for the book states that Spider is going after Somalian pirates, which he does,  but the book also deals with the IRA and Al Qaeda.

This international cast of criminal characters is impressive and they are interwoven brilliantly by Mr Leather as he ties up all the separate elements to cast his Spider’s web.

The book begins with an IRA cell who are preparing to transport a bomb to its final destination. A group of IRA enforcers break into the bomb area and announce that one of their number is a traitor and working with the British forces. Once the traitor is identified one of the enforcers turns his gun on his enforcer comrades and executes them.

This is Spider’s initial entrance to this story and he does not fail to impress.

Shepard is a professional working for MI5 the spiritual cousin to MI6. Shepard is the “real” James Bond here. Rather than working as a super spook though, he is a super undercover operator who is also licensed to kill. This he does. Spider is fast, brutal and professional, he is also relentless. This combination makes him impervious to any feelings of guilt he may have connected with his taking of life.

The story goes on to show us Spider’s home life and his son Liam and his au pair Katra. We also meet Shepard’s boss Charlotte ‘Charlie’  Button and we meet Spider’s IRA equivalent Lisa O’Hara who is on a bloody mission to track him down and make him pay for his death-dealing in Ireland.

We also meet Crazy Boy a Somalian wide boy who is a pirate, terrorist, drug dealer and addicted Khat and Xbox Manhunt player. Crazy Boy’s pirates take up the vast majority of the plot. They take a yacht which was on its way to the new owner. The transport crew on the boat include the Prime Minister’s God-daughter and Crazy boy’s Somalian crew abuse them while waiting for the ransom to be paid.

Crazy Boy also arranges to “take” a container transport ship (usually ignored by pirates) as part of his dealing with a middle-man for the Al Qaeda.

Shepard gets his hand dirty working against the odds to sort out all the problems he is handed by Charlie. He is also working against Lisa O’Hara who is getting ever closer to killing Spider.

This is how a spy thriller should be written. I have not read a book with such vivid characters. Stephen Leather’s ear for the speech patterns of his characters is spot on and I’ve said before (as well as earlier in this article) that this serves to make them come alive. Where most authors miss the nuances of their character’s speech, Leather nails it firmly and solidly.

As the winter days grow ever shorter and the nights grow longer, treat yourself to an exhilarating ride with Spider Shepard and Stephen Leather.

*On a side note, after I wrote my review on Stephen’s Nightmare, he actually tweeted the review and started following me on twitter, moreover he thanked me for the review. Not many writers do that, I know I’ve written a ‘couple’ of reviews now. He is a class act and proof that talent and hard work will out.*