Directed by Robert Rodriguez and written by Quentin Tarantino (who also played Richie Gecko) From Dusk Till Dawn is a Genre Bender. In other words it starts out as one kind of film and evolves into another.

At the film’s opening we see the Gecko brothers Seth (George Clooney) and Richie (Tarantino) and their two hostages who are in a gas station/liquor/convenience store. After they destroy the place, the film segues into the opening credits. It is apparent that the film is about two criminals who are fleeing the police.

Later in the film the Gecko’s take the Fuller family hostage so they can use their Recreational Vehicle (RV) and them to get into Mexico. Jake Fuller (Harvey Keitel) is a man of the cloth who has turned his back on his faith, Kate (Juliette Lewis) is his troubled daughter and Scott (Ernest Liu) is his adopted son.

After the entire group make good the Gecko’s escape to Mexico, they wait in a bar recommended by Carlos, The Titty Twister. Carlos (Cheech Moran) is Seth’s contact who will take him and Richie to El Rey and he has told Seth that he will meet them at dawn. Once the group are inside the club (which is in fact a strip club run by Salma Hayek where all the employees, along with Salma, are some sort of mutated vampires who feed off the clientele) everything changes.

The film is no longer about the Gecko’s escape from the law, it’s now about the two families escaping the club alive. The film, to me anyway, is beyond brilliant. It is almost the perfect ensemble of talent. Script by Tarantino, direction by Rodriguez, FX by Greg Nicotero, and George Clooney in his first starring film role. Not to mention the rest of the cast, Keitel, Lewis, Tom Savini, Michael Parks, Cheech Marin as three different characters…Well you get the idea.

But what I want to discuss today is not the overall film or the genre shift it so cleverly performs. No, I want to talk about Seth and Richard (Richie) Gecko and their dynamic.

In the opening sequence of the film we get an instant idea of who is in charge in the relationship. Seth is the mouthpiece, the leader and the thinker. Richie is the follower, he is also odd.

When Texas Ranger Earl McGraw (Michael Parks) comes in to get some Jack Daniels and to use the toilet, he stands and talks to the store clerk Pete Bottoms (John Hawkes) before he saunters off to the restroom. Seth comes up and accuses Pete of not listening to his instructions for Pete to “get rid of the cop” and Pete explains that he is doing that.

During this exchange Richie whispers to Seth that Pete is making signs at the cop.

As McGraw exits the toilet and goes to pay for his booze, Richie comes up behind him and shoots him point blank in the back of the head. For the first time since we’ve entered the store, Richie speaks out loud. He tells an angry Seth that Pete had been mouthing the words “Help me” to the Ranger.

Pete becomes apoplectic and denies this. He accuses Richie of lying. In the resulting firefight between Pete and the Gecko’s Richie is shot through the hand. Afterwards Richie has a hole through his hand and he seems detached from the whole incident.

We learn through television news flashes that Seth is a professional thief and that Richie is a psychopathic rapist/murderer. Seth himself does not seem aware of the fact that Richie is psychotic until he leaves him in charge of their hostage, bank teller Gloria Hill.

Before Seth goes to get food and to scope out their surroundings, he tells Gloria that as long as she doesn’t cause any problems and does as he says she will come out of her ordeal alive. We the audience never doubt his sincerity. He then leaves and Richie goes into the bedroom where Gloria is and asks if she wants to watch television.

Seth returns with some Big Kahuna burgers (a trademark of Tarantino’s) and information on what is going on in the area. He gives Richie his burger and takes two more burgers out of the fast food bag. He looks at the third burger in surprise and then remembers the hostage in the bedroom with the door closed.

He says to Richie, “Where’s the woman?” Richie gestures toward the bedroom, “She’s in there.” Seth goes to the bedroom door and opens it. His reaction to what he is seeing is beyond a doubt one of the most masterful moments of the film.

As Seth takes in the carnage in front of him on the bed, he starts a nervous tic of jerking his head ever so slightly, like he is starting to crack a stiff neck muscle. He also starts to slowly blink. Interwoven into Seth’s reaction are almost nanosecond flashes of the scene he is viewing. Blood, flesh, twisted gore filled bedsheets all flit past our eyes as we share the horror with Seth.

It is a turning point in the film for the two brothers. Seth suddenly realises that his beloved brother is a monster. The professional in him reacts angrily. He confronts Richie and loudly berates him for what has happened. Richies says that she tried to escape and she became threatening. Seth reacts angrily and says, “That lady would not have said shit if she had a mouthful.”

He starts banging Richies head against the motel room wall and Richie, disheveled with his glasses falling off his face, starts crying. Seth pulls himself together and then starts to calm Richie telling him that when they reach El Rey everything will be better and that he’ll get help for Richie.

Just a quick note on El Rey. In the “making of” features on the DVD both Tarantino and Rodriguez talk about El Rey. Wikipedia says this about El Rey:

El Rey is a fictional Mexican village that acts as sanctuary for expatriate American fugitives, first used by author Jim Thompson in his 1959 pulp novel, The Getaway, and again referenced in the 1996 Robert Rodriguez film, From Dusk till Dawn. In both stories, El Rey possesses a near-mythic reputation and represents the protagonists’ ultimate objective. But in truth, it’s a hellish community where inflation runs free and all new arrivals are enslaved and ultimately executed when they can no longer work.

On the DVD commentary, writer Quentin Tarantino reveals that the city is in fact hell.

The next time we see Richie he has asked Jacob Fuller if he can borrow their ice bucket. When Jacob agrees, Seth comes in and tells Jacob and his son that they are going to be their hostages. Daughter Kate returns from the pool in a bikini and Seth immediately takes full control. He now knows that Richie cannot be trusted around women.

This fact is rammed home when Richie has a conversation with Kate and she asks him if he will, “Lick my pussy.” When Richie starts to reply Seth snaps him out of his mental reverie and we realise that the conversation never really took place, except in Richie’s mind. It is another scene that shows just how scarily “out-there” Richie is.

Later when the Fuller family and the Gecko’s are in the RV, Richie. Kate and Scott are in the back. Richie leans forward and tells Kate that, “What you asked about in the hotel? I’d be glad to help you with that.” Kate clearly has no idea of what Richie is talking about and her face shows her confusion and her realisation that Richie isn’t the full ticket.

If we needed any more indications of just how uncontrollable Richie is, we find out when the group and their RV is stopped at the Mexican border. Just before a border guard comes into the RV to search it Seth takes Richie and Kate and they cram into the RV’s tiny bathroom. Richie takes offence at something Seth says and starts to throw a tantrum. Just as he starts raising his voice, Seth clocks him with his elbow and knocks him out cold. Kate looks at Seth and says thank you.

These scenes and the interaction of the two characters spells out for the viewer exactly who the Gecko’s are and what their relationship is. Seth, despite the fact that he cannot understand Richie and his revulsion at what Richie does, loves his brother and tries to “save” him.

The entire film is just brilliant and perfect marriage of cast and crew and script. A lot of film references are in the movie, mostly of horror films and icons. But in closing the best film reference is the duo of the Gecko’s. That they were inspired by the Gorch brothers (Ben Johnson and Warren Oates) in The Wild Bunch is beyond doubt.

If you don’t think so, just watch the start of the movie again and listen to Seth’s dialogue when he is warning Pete the store clerk. 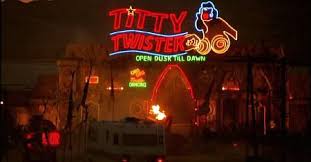