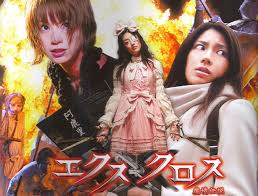 While I was on the comedy horror train with my last review of Lobos de Arga (can you tell that I love that film) I thought of another rib tickling comedy J-horror. X-Cross.

Now X-Cross or XX or (ekusu kurosu): makyô densetsu [original title] were all made in 2007, because they are the same film! Get it? We picked up the X-Cross DVD for a song at CEX after I’d been steadfastly ignoring it on the net.

It looked like a sort of mish-mash of soft-porn and horror that just did not interest me at all. But for the ridiculously low price of 3 pounds sterling, it was worth a look. Only after buying it did I realize the the guy who directed Battle Royale 2, Kenta Fukasaku had also directed this.

Now considering that I think the ending of Battle Royale 2 is not only pants, but pants squared and is so bad that I stop the film before it gets to the ‘Kenta’ end preferring that part of the movie to be the real end. Sad I know and on par with Marge Simpson eating the Bambi video tape rather than letting the kids see Bambi’s mom get shot…Oops! I hope I didn’t spoil that for you! I still decided to give the movie a go and I was glad I did.

Tetsuya Oishi wrote the screenplay taken from the novel written by Nobuyuki Jôkô. The film is classed in the ‘action horror’ genre and it does indeed fall into that realm of film, but what the DVD case won’t tell you (unlike IMDb which does tack comedy on the end of their description) is that the film is incredibly funny.

The film opens with a mobile phone (cell phone) vibrating and ringing in a closet. A girl looks in the closet and seeing the phone answers it. A man’s voice is heard and due to the poor signal his voice is broken and unclear. What is clear is that he is excited or upset. The girl takes the phone out of the closet and holds it near a window where the signal improves. The phone rings again and when she answers a mans voice tells her to, “get out of there! They’re going to cut off your leg!”

At that point someone starts banging on her cabin door. The film then ‘rewinds’ and shows us how this particular girl got here in the story and where the mobile phone came from. We also find out what happened to the mobile phone’s owner and it’s not good.

This ‘out-of-sequence’ and rewinding the action to show a previous event or even another one, is used throughout the entire film.

Shiyori (Nao Matsushita) and Aiko (Ami Suzuki) are driving along a remote and seemingly deserted mountain road in search of a hot springs resort that they have booked cabins at. Coming out of a tunnel they almost run down a woman standing in the middle of the road.

The scope of the film seems ever-expanding as more and more peripheral characters are introduced and then seemingly forgotten only to turn up later on in the film. We see things from Shiyori and then Aiko’s perspective  and like the rewinding time aspect at the beginning of the film, the timelines go all over the place. It is easy to get confused about just what is going on. The film is separated into chapters that (like a Tarantino film) have short descriptions of the chapter.

But if you hang in there and don’t let the screwy timelines or the rewinding time feature frustrate you, the movie will entertain you and make you laugh and jump. 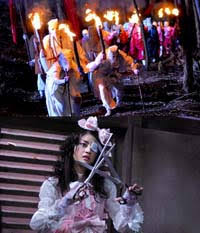