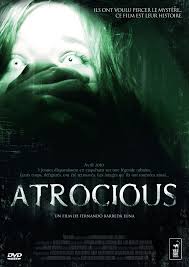 Written and directed by Fernando Barreda Luna, Atrocious opened to mixed reviews most notably from Rotten Tomatoes. I will admit to having passed over this particular film several times on LOVEFILM. The thumbnail combined with the films short description did nothing to peak my interest. The film’s title also did nothing to help sell the film. I am still at a bit of a loss to understand why it was titled Atrocious.

Finally curiosity forced me to give the film a try and I’m not sorry I did. The film was edited very well and the guerilla style of film-making helped to bring the events to life. I was afraid that the film was going to be another ‘Blair Witch‘ or ‘Paranormal’ or even ‘Cloverfield‘ and that it just would not be worth the time it took to watch the film.

Wrong, wrong and wrong. The film may have borrowed a little from each of the three mentioned titles, but they borrowed so little that it wasn’t readily noticeable.

The film’s plot is quite straight forward. The Quintanilla are going to their summer home for a holiday. Once there the two older children, Cristian and his sister July, continue to work on a video they started making before they arrived at the summer home.

Intrigued by an urban myth about the forest surrounding their summer home, they decide to focus their video on the woods and the myth itself. The myth says that if you are lost in the woods the spirit of a girl called Melinda will guide you or show you the right way out of the woods.

Cristian and July decided to explore the forest and see if they can get to the heart of the myth. In the meantime their younger brother Jose must keep himself entertained and mother keeps busy doing things around the house. Their father has been called away on business.

When mother finds out that they have been filming in the woods, she freaks out and forbids them from entering the forest. They pretty much ignore this new rule and when the family dog goes missing, the first place the kids go to look is the forest.

Despite the fact that this is Luna’s first feature length film, he proves that he is more than capable of using suspense in the best way possible to make some of the scenes excruciating to watch. As the suspense mounts up, it takes very little for your imagination to take over and send you into a child-like state of fear.

Luna has also opted to use the absolute minimum of music in the soundtrack. The absence of ‘mood’ music helps to build the unease that we feel watching and puts the audience into an almost ‘fly-on-the-wall’ position.  When the final twist is exposed to the kids and us, we are shocked, confused and left slightly breathless. I certainly did not see the twist and it took me completely by surprise.

The film opens stating that what we are watching has been compiled from a police evidence tape. The entire family was found murdered and this the only footage of what happened. So even though you fully expect the family to die, when it happens, you are still surprised.

I  kept expecting the victims to get killed off much earlier. So that there was a ‘building’ body count. Luna decided not to take that route and chose instead to shock us all at once.

The scenes in the forest at night were extremely well done and even had the odd bit of comedy thrown in which helped to make the footage seem more real. The young actors playing Cristian and July (Cristian Valencia, Clara Moraleda) really felt like a brother and sister with the way they interacted with one another.

Overall this film was a lovely little surprise that, despite the somewhat confusing title, really delivered as a horror film. I can say that Atrocious is one of the better horror films I’ve seen this year.