As mentioned in my review of this latest Tarantino offering, I was 11 years old at the time of the Manson murders. Sharon Tate was not discovered by me until I found the Roman Polanski film The Fearless Vampire Killers (1967) on the Tulsa late night “Creature Feature” hosted by Gailard Sartain. The show, where Sartain appeared as Dr. Mazeppa Pompazoidi, (with a very young Gary Busey) began one year after the Tate murders and at the end of the 1960s, in 1970.

Sartain, aka Mazeppa, presented a lot of Hammer horror and the odd “non-Hammer” horror on his show. I caught the Polanski film around the end of his reign as creature feature presenter in 1973. (These are all rough guesses as this was an entire lifetime ago.) The show quickly became a favorite. Not just because of Tate, but because that dance scene, where Polanski’s character, along with Jack McGowran‘s vampire hunter face a vacant mirror…

You may well wonder how this relates to Quentin Tarantino’s latest “masterpiece.”

Let me explain. In the 1970’s, after discovering the reality of Sharon Tate (I’d also seen her in the Matt Helm feature, one that I was too young to watch in the cinema when it was initially released, The Wrecking Crew) I was hooked. In short, I had one heck of a crush and tried to find out everything I could about the late actor. 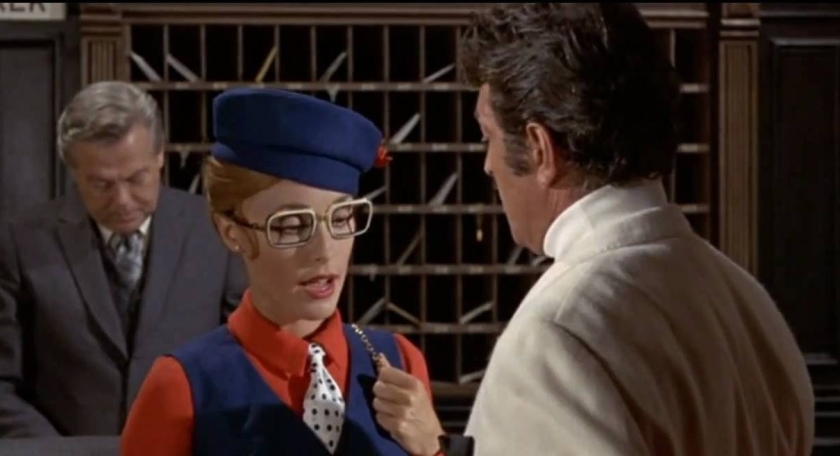 In 1974 (aged 16) I read “Helter Skelter” written by Vincent Bugliosi (with Curt Gentry) and learned of the horrifying murders committed by Manson’s followers in 1969. The idea of this heavily pregnant very talented newcomer (with an excellent touch of the comedic) being slaughtered by a crew of drugged up and tuned out hippies hurt. This act of cruel and senseless violence left a mark on me that has never been eradicated.

Tate’s murder, along with that of her fellow houseguests, changed Hollywood forever. It had far reaching effects on the famous denizens of the film capital of the world. It also, to a huge degree, marked the end of the “Swinging Sixties.” More than the march of Father Time, which ushered in the ’70s, it killed off that dreamlike movement of free love and peace.

This terrifying act, which showed the underbelly of commune living that pre-dated The Moonies and Waco, Texas, stuck in the back of my mind while watching Tarantino’s film. A fantasy, to be sure,  that also served as a snapshot of “old Hollywood” was hard to get into. While the rest of the cinema audience laughed at the “comedy,” I sat silent and disassociated from the events on screen.

It was only after viewing the film that I suspected (Realized?) that the director/producer was showing us not only the “death” of Old Hollywood, but was, simultaneously,  giving us his “happy ending.” An ending where the monster(s) is/are vanquished by a trio of film misfits who are on their way out of the limelight.

This “ever after” ending made me re-evaluate the entire film. I will go back and see Tarantino’s offering again. Perhaps, with the new revelation of his sly and devious presentation, I will be able to laugh more than once. It will be hard though as underneath the “message” presented by Hollywood’s “auteur” I will still “see” those slain by a group of idiotic followers who listened to a tiny evil misfit who preached hate and whose life was one long mistake.

Once Upon a Time…in Hollywood is an interesting film. One that the audience seemed to appreciate. It does, however, disturb in many ways. The fixation of Julia Butters’ character – all grown up looking with those long lingering close ups of the lipstick and makeup. To what purpose? I can only wonder at the rationale for these shots as later, when she whispers to Dalton about his performance, child-like, one is moved to tears at DiCaprio’s character’s reaction.

Brad Pitt’s character also disturbs. The man who “murdered” his wife and got away with it also manages to care enough about the blind owner of Spahn Ranch to check on his welfare. DiCaprio’s fading star is a mixture of stammering insecurity and alcoholism. Both men are misogynistic and, for lack of a better term, dumb. Pitt’s stuntman is a neanderthal that has managed to make the most of his physical skills and DiCaprio’s western TV star is an anachronism before his time.

There is a lot to recommend about the film. However… Those who remember the event, which is smoothed over by the director, may have a hard time getting into the thing as presented. Brash, bright and benign, Once Upon a Time…in Hollywood lacks the brilliance of Pulp Fiction and the grittiness of The Hateful Eight. It does, somewhat sadly, bring us back to a time of violence that may well best be forgotten by those not directly involved.

Once Upon a Time…in Hollywood is in cinemas now.