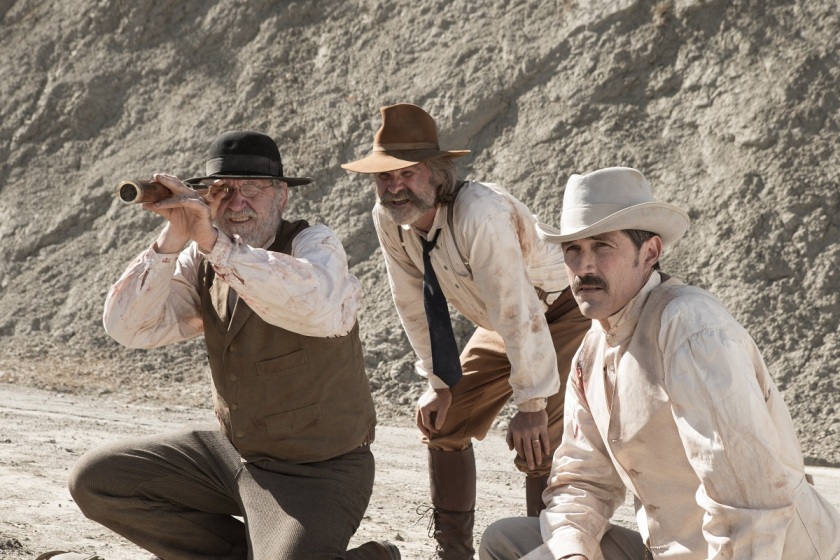 The mark of any good film is the urge to immediately watch it again after viewing. “Bone Tomahawk,” with Kurt Russell battling cannibals, is one such film. With just enough truth in the production to make is stand out as a straight up western, this horror film combines genres even better than the 2008 film The Burrowers.

While the earlier western/horror had some pretty imaginative “boogeymen” this film takes from American history to bring a Native American tribe of cannibals to life, with a little poetic license, in an area quite close to where a real tribe of cannibalistic warriors existed; the Kronks.

(Anyone wanting to read more about this tribe can check out Mike Cox’s “The Texas Rangers” ‘Wearing the Cinco Peso 1821 -1900’ where he goes into detail about the group, which both the Spaniard’s and the other tribes feared; the Karankawa – called Troglodytes in the film.)

Written and directed by S. Craig Zahler (his first effort in the director’s chair) and starring Russell, Patrick Wilson, Richard Jenkins, Matthew Fox, David Arquette and a splendid cameo by Sid Haig, this is a cracking film. In terms of cast, the film is rounded out by Lili Simmons, who plays Mrs. O’Dwyer, Wilson’s wife and there are three more well-known actors in cameos: Zahn McClarnon, as The Professor, Sean Young, as the Mayor’s wife, and James Tolkan, as the tired pianist.

At the start of the film, which is set in the mid 1800s, two literal cut-throat bandits, Haig and Arquette are busy murdering a small camp of men who are  sleeping. A gunshot alerts  a mounted group of men and the two escape on foot in the surrounding hills.  Buddy (Haig)  is killed and Purvis (Arquette) runs away in terror.

Time passes and the town of Bright Hope, where Sheriff Hunt (Russell) is the law with a deputy (Nick) and “reserve deputy” (Chicory played by Jenkins) and the man does not suffer fools or insolence gladly.  O’Dwyer, the new foreman of the local ranch is laid up with an injured leg and Chicory spots Purvis, on the outskirts of town burying the luggage he and the late Buddy stole earlier.

Hunt braces the odd acting man in the local saloon who tries to run. Hunt shoots him in the leg and as the town doctor is drunk, O’Dwyer’s wife Samantha comes to dig the bullet out. In the morning a stable lad is found murdered and the jail is deserted. Arrows left at the scene implicate a tribe of Native Americans that The Professor calls Troglodytes.

Hunt, Chicory, O’Dwyer (Cowboy) and Brooder ride out to save the deputy and Mrs. O’Dwyer. After a number of hardships, and O’Dwyer repeatedly injuring his leg, the men catch up to the cannibal tribe who outnumber the rescuers and seem other worldly.  The battle ends in capture and things look pretty bleak for the group.

At two hours and 12 minutes the film should have been overly long, however, despite the somewhat slow pace, Zahler keeps thing interesting enough that at no point does the film drag.  The action, which includes some gunplay, a theft of horses and some darned scary predators makes for a compelling experience.

The cast all bring their characters to life in the most delightful way. There are moments of truth scattered throughout and the protagonists all are of the taciturn and stoic breed of yesteryear. Russell, who was born to do westerns (despite his “The Computer Wore Tennis Shoes” Disney beginnings) always makes his dialogue sound authentic.

In one scene, after the lawman discovers  that O’Dwyer’s wife has been kidnapped, a local businessman is complaining about his four prize horses being stolen. When he mentions it again,  Russell (as Hunt) stops him mid-sentence:

“You mention horses again and I will slap you red.”

Said with all the authority of Wyatt Earp, Russell makes the line as serious as a heart attack and the bigger man stands disbelieving but does not move against the threat.

The performances are spot on, as is most of the dialogue, and Russell is in good company with Wilson and Fox  working in concert to bring an air of believability to the tale of western  horror. Richard Jenkins however (who actually went unrecognized by this reviewer till the credits) gives a brilliantly odd and quirky, yet honest, performance  as the limping reserve  deputy.

The film has quirkiness to spare. Wilson talks to God throughout, and apologizes to Him when he swears inappropriately. In a film about cannibal Native American’s Hunt constantly worries about how much his companions are eating and the “gunfighter” Brooder manages to be prickly enough to everyone that they miss his humor.

(At one point the gunman claims to be the smartest man in the group because he never married.)

In terms of gore there is a moment, in the lair of the cannibals, where it is pretty horrific but it is not “in your face” and lasts seconds. There are nods to other  films. The troglodytes make one think of the hunters in Predator and there are a few little winks to other western films.

“Bone Tomahawk” looks brilliant, the  lighting is spot on and the framing of each scene is right on the money. There are some things not quite as impressive, some of the sound effects do not  ring tru; , too near the microphone or slightly off and less realistic sounding. The fashion, in terms of headgear is a bit hit and miss but none of these things really matter.

The storyline and the acting move this film forward well enough that any shortcomings are easily ignored or forgotten.

“Bone Tomahawk” is an award winning film and for good reason.  A perfect 5 out of 5 stars for a movie that engrossing, engaging and impossible to stop watching, even for a moment.  It is currently on Amazon and  this western/horror masterpiece  is a must-see film.