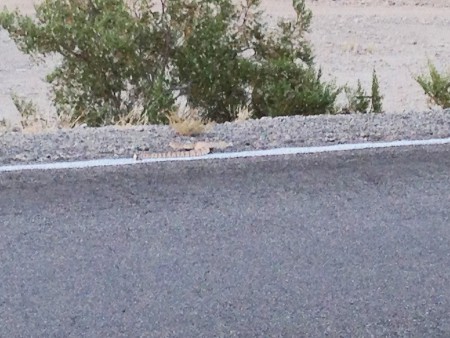 Yesterday in the “real” desert there was a thunderstorm that literally lasted most of the day and all night. While Skype messaging my daughter in the UK, (We had to IM versus talk as the signal is so sporadic that real conversations consist of, “Can you hear me? Are you there? You’re frozen. You’re frozen again. Am I frozen?”) I remarked that I meant to bike into town but looking at the ominous clouds and lightning it seemed a good idea to pass on the visit. Not long after, we ended the “call” and I went out to video the ominous looking clouds.

Doing my impression of a “storm chaser” on foot, I walked down the street outside the house filming sporadically. After a short period of “Oh there’s a great bit of lightning! Sh**, I missed it,” I gave up the roaming reporter rubbish and wandered back to my front garden and opted to just watch and occasionally film things that caught my eye.

Real storm chasers and those who document their exploits can rest easy in the knowledge that I am not a threat to their livelihood. My talents do not obviously lay in that area. Of course the storm threatened to break out all day and only really got interesting after dark. Once the sun went down all hell broke loose and rain came down in sheets of frenzied water that thrashed the trees almost as much as the gusts of wind.

The ferocity of the rain was such that the weather-proofing I had done weeks before was inadequate to keep the water from forcing its way into the trailer. Three leaks appeared but only after the pounding rain swept through on the third wave. The storm blew the rain in and out three times, at least that was what I counted before falling asleep waiting for the next onslaught of weather, and it was this last time that the leaks made themselves known.

Before making my nightly visit to the Land of Nod, I put out a pot for the worst leak and thankfully the other two watery intrusions were not enough to warrant pots or pans.

The sun came out upon a typical day of sun, sand and critters roaming throughout the neighborhood. Woodpeckers and some sort of yellow and black bird busily stealing the hummingbird’s nectar (with me busily chasing them off, call me cruel but they knock the feeder all over the place and get nectar everywhere) and lizards exercising along the surrounding property wall.

While the entertainment value of the pushup performing lizard does not match the heart pounding excitement of the rattlesnake encountered over the weekend or the sounds and the fury of last night’s storm, it is enough to keep me amused and content. All that remains is to see what tomorrow will bring.

14 thoughts on “Life in the Real Desert: A Typical Day”