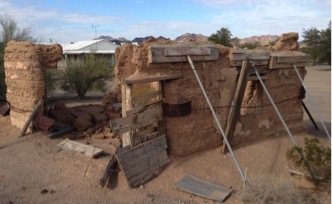 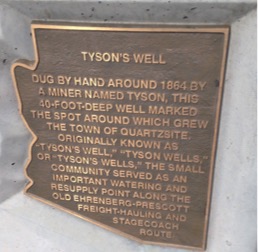 There is an old saying about lemons and lemonade, sometimes however, this saying means very little when a whole truckload of the little yellow things have been shoved in one’s face. When they are mashed repeatedly into whatever orifice is available, rather than making a childhood drink, retreat is the only option.

It was this latter reaction that led to a stress filled journey over the mountains and desert to a small and rather odd little town in Arizona. Situated between Phoenix and Blythe, CA, Quartzsite is home to snowbirds that flock from all over the continent to winter in less hostile, spelt cold, climes. Rather than go into the background of how the thriving winter metropolis of Quartzsite, Arizona (Pop: Fluctuating) became home, however temporary, let’s jump right in and look at this fascinating little burg.

This anachronistic bump in the road made its name in the history books because of a local camel herder called Hi Jolly. His real name was considered quite unpronounceable by both the Cavalry that hired him and the locals who interacted with the foreigner who wrangled the strange beasts shipped in by the U.S. Army.

Hi Jolly was part of an experiment to see if camels would adapt to the American West desert setting and provide mounts better suited to the environment. The humped creatures needed little in the way of water refills during their travails and could carry very heavy packages on their exotic backs.

When the trials failed to impress the government, the camel herder stayed on in Quartzsite. He performed various other jobs to survive, one of which involved his using the few remaining creatures to provide a packing service in the desolate and sparsely populated area.

The experiment was doomed to fade back in the annals of history, a brief blip, or hump, where paradigms were challenged. The camel herder became a local fixture and beloved character. When he died the local citizenry erected a monument to the man and his camels.

Hollywood broached the subject of these camels at least twice, once on the big screen in a film titled “Humps” and at least once on the small screen in an anthology television western series. The former of the two was an intended comedy and the latter a scary sort of ghostly tale of the old West where a rampaging camel terrified the residents of a small Arizona community. 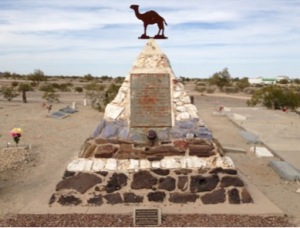 Various modes of transport for these non-feathered creatures that seek warmth in the winter months include 4X4’s, trucks, jeeps, motorbikes, bicycles and shoe leather. A pretty impressive contingent that rely upon their feet to get them from one bit of the desert to the next and have no temporary fixed address in Quartzsite are known as “Desert Rats.”

It may not be advisable to address these fiercely independent, yet usually quite friendly, individuals by this term, but while it may sound a bit derogatory, it also feels almost like an honorary title given those who refuse to bow under the weight of civilized society.

This area of the country feels almost isolated from modern day realities. Certainly there are the amenities that one comes to expect from any community. Cable television, in certain parts of town, Satellite TV, telephones, both cell and regular, and the Internet; not modern Internet, oh no. This is not double digit megabytes per second download and upload speeds. This is one halting pace ahead of dial-up modems, which graced the desk of many “back in the day,” which frustrated office denizens over a decade ago. 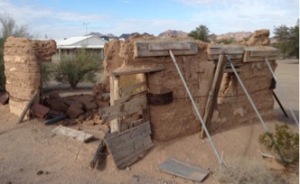 As one who makes his living, such as it is, via the Internet, this was a drawback not quite anticipated. The thought being, that a country as technologically advanced as America must surely have overcome this problem of distance and World Wide Web access.

The thought is an erroneous one.

There are a few “hotspots” in the town, one at both Truck Stops, which require a monetary exchange to access, and both are equally frustrating to use. McDonald’s and Carl’s Jr both have free Internet but none of these choices are perfect for performing business in as all are full of noisy customers and have signals that fluctuate so wildly that it creates stresses conducive to postal worker levels of rage. 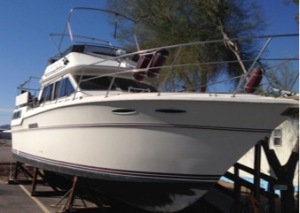 If Burger King provides free Wi-Fi they certainly do not publicize it via the net. There is a small Internet Café hosted by that quirky motel the Quartzsite Yacht Club. Having used both the café, and having stayed in the place twice, it is very each to vouch for the staff’s friendliness if not the power of their Internet. For privacy, and peace and quiet, this is a pretty good option for the travelling writer, however it does work out a bit pricey.

The motel itself consists of modified trailers and in the “off season” features some reasonable prices. The most expensive place to stay at the Yacht Club is, of course, the Yacht called, rather quaintly, Mai Tai. At $150 plus tax it is a tad hard on the pocketbook and certainly not worth it in terms of “standard” hotel/motel standards.

It is delightfully weird to be staying in a nautical vessel in the middle of the American desert and the queen sized bed, along with the two mate’s bunks in the back of the boat, are very comfy, if not overly clean. Apparently there are not many who want, or can even afford, to pay that much to stay in a miniature version of the USS Minnow…Even though the average age of most Quartzsite residents places them in the dwindling population who remember that television show before it was syndicated. 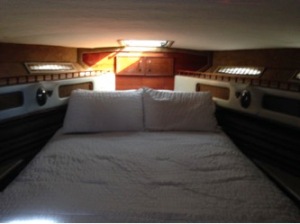 This is the beginning of a long (ish) running set of articles about the desert setting I now find myself in. Rather different from my digs of the previous year in Las Vegas where I met a number of fascinating, and not-so fascinating people. Stay tuned for more updates on this wildly interesting (to me at any rate) place and any suggestions or questions about the locale or my direction at the moment are most welcome. Also any long term residents or temporary “snowbirds” who want to comment, please do!

2 thoughts on “Living in the Real Desert: An Aged Microcosm of Society”