Directed again by Wilson Yip (for the last time in the series) Ip Man 2 continues the tale of Ip Man and his rise to worldwide fame. There have been less complaints about the film makers “frugality” with actual events this time around. Picking up where Ip Man finished, the film takes place in Hong Kong.

Donnie Yen reprises his role as the modest yet powerful Wing Chun master Ip Man. But he is not alone, he’s got company from several actors from the first film. Actors Simon Yam, Lynn Hung, Siu-Wong Fan, and Li Chak are all back reprising their roles from the first film.

One very delightful addition to the cast is Sammo Hung, who choreographed Ip Man 1 and 2, playing the overbearing martial artist master Hung-Chun Nam. Despite recovering from major heart surgery just prior to filming, Sammo gives his usual level of acting and (performing all his own stunts and getting injured in the process) fighting.

This time around it’s not just other martial arts masters that Ip Man has to deal with, it’s the occupational British who have claimed Hong Kong for their commonwealth. With an overbearing attitude, which to be far the English in those days practised wherever they happened to occupy, and a clear distaste for the new British commonwealth citizenry; the people who “run” Hong Kong are equal to the Japanese in their attitude if not their actions.

Despite this being the real focal point of the film, the actors playing the snobby and dislikable English overseers of Hong Kong are abysmal. Not one of them can decide which accent to use sounding like a strange combination of Australian, quasi-English, American, and God knows what else.

Bad accents aside, the acting level was such that I harboured suspicions that the film makers had grabbed foreign tourists off the street to plug into the roles of the villainous British leaders. In a film where most of the climatic scenes take place against these oppressors, it really hurt not only the credibility of the film but it marred the film’s message as well.

Still, the fight scenes were impressive, the students were likeable, irritating and endearing, and Ip Man’s wife was a lot more understanding this time around.

I need to say a quick word about Siu-Wong Fan who got to reprise his role as Jin from the first film, his character is a reformed man after  the experiences from his interactions with Ip in the first film. He gets more of a part to play in the proceedings as a good guy, but then,  he practically disappears for the rest of the film. I loved what he did with Jin and he was easily my favourite character besides Ip and Hung.

Donnie Yen has gone on record as saying that this is the definitive Ip Man film and that it easily overshadows the first film. I disagree. While he does a brilliant job, again, as Ip; the film doesn’t have quite the same structure or fluidity that the first film offered. The scenes of Ip fighting Master Nam (and his sycophants) could have been a lot longer although, admittedly, the premise of fighting on a loose table top was pretty damned impressive.

When Ip Man 2 was in its pre-production stage, it was going to focus on Ip’s relationship with famous pupil Bruce Lee. Due to their inability to get legal clearance from Lee’s family in time, Lee’s “appearance” in the film is shortened to just a few seconds of a very young Lee “meeting” Ip Man. A short sequence that was amusing, but intimately un-needed, I thought.

Overall, despite Yen’s assurances that this the Ip Man movie that will gain legendary status, I did not enjoy the film nearly as much as I did the first one. Consequently, I’ve given it a 4 out of 5 stars after taking a full star off for the un-even acting skills of the non-Chinese actors in the film.

Although I am sure that all the “foreign” actors in the film were hampered somewhat by working in a film that doesn’t feature English as its main language, a problem that I’ve noticed in most Asian films that feature English or American actors/characters. I hope that the next project they work on doesn’t handicap them as badly as this film did.

This is available on iTunes at the moment. 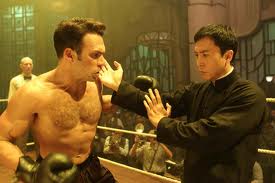