Today was my first rehabilitation session with the Cardio group. I think that I was the youngest,  but there was one other chap (a foreigner like me) who may have been a year or two younger. Either way, he and I were the “youngsters” of the group.

Having to wait for over seven and a half months to do my rehab, I was a little excited and a bit worried. I got there way too early and felt awkward as hell sitting in the hallway while waiting for the Physiotherapist to call me and the other “heart” patients in.

When I first got there a chap with a goatee who was being wheeled into an operating theatre waved to me and said, “Oh, hi Mike.” I nodded back and then spent the next twenty minutes wondering, ‘Who in the hell was that?’ It is at times like these that my idiotic vanity about wearing my glasses frustrates me almost enough to start wearing them.

In the interim, more folks gathered in the hallway and we were all called in together. I and two other folks were the “noob’s” of the group and got special attention. I do not know about the other two (a chap and a woman) but I felt stupid and clumsy. Not to mention the fact that I had to slow myself down.

At first, I felt that all the exercises were too easy. I was annoyed that I’d had to spit out my nicotine gum and I was beginning to think that all this had been a complete waste of time.

Then we got to the “sitting” exercise. It’s simple. You sit on a small stool (bench) and stand up. You then repeat this process for two whole minutes. At the midway point the first time we did this exercise, I looked at the chap next to me and said, “This one is going to be the killer.”

He nodded and grinned. The second time we had to do the exercise, he looked at me and said, “Did you say this was going to be a killer?” It was my turn to grin and nod. “You’re right, ” he said, “It’s a killer.”

At the end of the session we had tea or coffee (lovely touch, that) and a fifteen minute “cool-down” period. We all chatted and asked the odd question of the three ladies who ran the rehab group. When our time was up, I grabbed my hat and jacket and  said to the group, “see you later ladies.”

My stool sitting chum grinned and said, “See you next week!”

A good start to my eight week program and one that I expect to benefit greatly from as well as enjoy as the ladies running it make this whole thing a fun experience.

My new diet is another matter entirely. My first session last week with the Cardio specialist was an exercise of a different sort. I sat there dumbfounded for most of it. The reason?

Tuna fish in a tin (can) has no Omega 3. Zero. Zip. It’s something to do with the canning process. If it isn’t fresh (and who can afford that on a regular basis, I ask you) it isn’t healthy.

Salmon, mackerel, sardines, pilchards and kippers all are chock-a-block (full) of the stuff; tinned or otherwise. Now the only thing wrong with this list is that I only really like sardines and pilchards. So it’s going to be the Omega 3 supplements for me I’m afraid. Everything else is too damned fishy and oily.

Salad for my main meal (tea in this country, dinner in the US) is okay, but, it needs to be full of peppers, onions, carrots, et al, for it to be of any real benefit. This new fad of “5 a day” that is being almost literally shoved down our throats dictates that even loaded with the maximum of goodies, salad does not even equal one of that five.

I did explain that after my heart attack and surgeries that I did not eat that much. It is pretty much impossible for me to have five of anything per day! I also pointed out that if I increased my food intake, my “measurements” for the healthy zone were going to be shot.

On the positive side, I was told that my occasional ingestion of eggs and low-salt, low-fat bacon was okay. That my move away from meat as my main staple, while not necessary, was nonetheless helpful. I was also told that low-salt was a misnomer because no matter how high the salt content is, it is still salt.

I was also told to stop eating the fancy (spelled expensive) margarine since to get it to actually lower my cholesterol I’d have to eat gallons of it. A good old olive oil based margarine was just as efficient and cheaper.

As I sit here feeling comfortably healthy and full from my mackerel and toast snack, I am looking forward to my next week’s session and my salad for tea.

Perhaps I can work up to this “5-a-day” requirement, but, I’m not holding my breath. 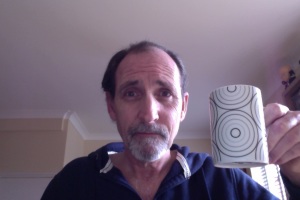