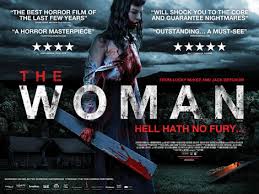 Lucky McKee directed and co-wrote (with author Jack Ketchum) The Woman; a film  that could be called Nell on acid. Although this is a sequel to the 2009 McKee film Offspring about a “tribe” of cannibals who roamed the north-east coast. The “woman” is the sole survivor of this tribe. But not having seen the film, I did not learn this from watching the feature. Wikipedia kindly supplied that information.

The male in The Woman does not have help in mind when he captures the feral woman.

Of course the other connection between the two films is that the actor who plays Chris Cleek (Sean Bridgers) was also in Nell. Small world isn’t it? I’ve also got to say, it bothered the hell  out of me that Bridgers looked enough like Will Ferrell to be his twin brother.

The Woman opens with a wild and savage woman in the woods. She is feral and adept at hunting and fishing. She’s also Amazonian in stature and apparently quite strong. Chris Cleek goes out into the woods to hunt and stumbles across her.

He is obviously intrigued and makes plans to capture her. He succeeds in this and takes her captive. Unlike Nell, where the good doctor wants to study and help his “discovery,” Cleek wants to turn her into his and his son’s plaything. Something to torture and humiliate and abuse.

The Cleek family consists of Chris, wife Belle (Angela Bettis), daughters Peggy  (Lauren Ashley Carter) and Darlin’ (Shyla Molhusen) plus son Brian (Zach Rand). The family is all about what Chris wants. He is a class A pervert, control freak and hater of women. Son Brian, under his dad’s loving but controlling tutelage, is a chip off the old block.

While the woman is held captive in the old storm cellar, tensions rise as the whole family become involved with this wild creature and the school is getting concerned at the constant absence of Peggy from classes.

As the film moves disturbingly to it’s almost inevitable and anticipated finish, you will be hard pressed not to be disgusted at the way that head of the family Chris rules his family with an iron hand. The females of his family are terrified of him and not without cause.

While the woman he is holding captive in the cellar might be feral, he is a monster and son Brian a monster in-training.

When the film premiered in the US, there was some controversy about the subject matter and the way that women were treated and depicted in the film. I seem to remember charges of sensationalism being levied as well. But considering that director Lucky McKee was not above generating any kind of publicity for his film, I don’t know how much credence can be given to any of these charges.

As for myself, I couldn’t for the life of me decide whether the filmmakers were making an anti-feminist sort of statement or were awkwardly trying to make some sort of empowering statement for women!

The climax is shocking, but not surprising. It is bloody and savage and well worth the wait. But having said that, it is still confusing. It is a powerful film and a shocking and disturbing one.

I would give the film a 3.5 stars out of 5 only because it was very different. Not having seen the prequel of Offspring, I have no idea if continuity was good or bad. I only know that for the most part, I found the film very distasteful and kept watching to see if some sort of justice would be served.

A film that is definitely not for everyone. But if you can stand it, it is on Netflix at the moment.