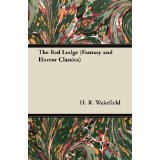 I first read this short story when I was about 12 or 14 years old. It was part of a horror anthology entitled Tales of Terror. (Not to be confused with the Alfred Hitchcock anthology of the same name.) This book, which had a off-shade green cover; featured pictures from each story in the collection. Wonderfully eerie and very evocative of the stories inside.

I cannot seem to find a copy or indeed a reference to this anthology anywhere. The closest I’ve gotten is a book called the The Eighth Fontana Book of Ghost Stories. As best I can tell this is not the book I read all those years before. The list given for the Fontana collection does not include The Rune Stone which I definitely remember being the second story in the book with The Red Lodge being the first.

A long time ago I checked this book out of the local Lincoln Library. It went missing, along with two other books I’d checked out, in a “haunted” house we lived in at that time. After paying several over-due fines the books came to light in my father’s office/study in his ‘house plan’ box. (He was a house builder)

There was no earthly reason for these three books to be in this box in the bottom of the closet in his office. When he found them there, he got rather angry with me for putting them there and reminded me that this area of his office was “out-of-bounds.” How the books got there remains a mystery.

The house itself is no longer there as he tore it down in the 1980’s to build an apartment building where the old white house stood. I’ve always wanted to talk to anyone who lived in these apartments if they’d ever experienced anything out of the ordinary. It would be interesting if this “haunted house” lived on through the apartments.

But I am digressing, very badly. So, back to the story itself.

This tale scared me to death. It also gave me an almost lifetime aversion to looking out windows at night and a ridiculous fear of old English houses located next to rivers. Especially rivers that ran behind the house’s garden.

H R Wakefield was born in 1890 and his stories were written during the 1920’s while he worked as the chief editor at a publishing house. He was well-known for his ghost stories which were very popular at the time. His work was included in this short story collection and after reading it, you can see why it is the lead story in the book.

I had to search for quite some time to find any of his short stories and finally found a copy available on the kindle of The Red Lodge. This sixteen page tale of terror in an English Queen Anne style home in the country is still capable of “putting the wind up” while you read it. I actually made sure that I read it during the day…in a brightly lit room.

The Kindle copy of the short story is a bit dear at £2.46 but it is well worth it.  Almost 43 three years have passed since I first read this book and it still has the power to scare the hell out of me.

This is a real classic of a story and well worth the money spent to read it.