So according to certain “scholars” the world is going to end tomorrow. Or, I guess more accurately, in about 6 ½ hours (give or take a few micro-seconds). But the six some odd hour’s thing is just a guess since the Mayans did not actually say when on the 21st the world was actually going to end.

Now don’t get wrong here, I am not thumbing my nose at the Mayans or the scholars who “deciphered” the calendar that suddenly stops on the 21st of the 12th 2012. I will have to admit that I don’t care enough to spend too much time searching the net for additional references to the day the world ends. I probably should though just to be on the safe side.

I don’t want to wake tomorrow morning and waste my time being superior and doing the “See! I told you this was a load of bull pucky;” only to have everything blow up in my face at noon or twelve midnight of the 21st of December.

I know that they came up with this really awesome calendar and that’s great! But do we really think that a race of people who practised human sacrifice could predict the end of the world? Really?

If these ancient Mayan’s were so clever, why did their civilization collapse? Oh sure, a 200 year drought may have had something to do with it, but, they also could have been overthrown by folks who did not fancy being the latest sacrifice to the Gods they worshipped.

In fact, if I have the “facts” straight, their wonderful calendar does not “state” that the world will end on the 21st. It just does not go beyond that date. There could be a lot of different reasons for this.

But seriously why does anyone believe that an ancient civilization could tell when the world was going to end. I’m pretty sure that the lack of dates past a certain time does not indicate the end of time or dates.

Folks have been saying that the world’s going to end a lot. Okay, most of these folks are religious cranks that usually belong to a cult and believe that angels are going to descend in a space ship and take them to heaven. Of course not all cults believe this, some just think they need to be at a certain place or they’re going to miss the “heaven” train.

Talking to a bank teller today, the subject of the world ending tomorrow came up. “Well, if the world’s ending tomorrow, I’d better wish you a happy Christmas now.” He was laughing when he said it. After we finished laughing at his funny remark I wondered if I still needed to send out Christmas cards this year. I could always send them late with the excuse that I wanted to save money on the postage, especially if the cards would never get there anyway.

But on a different note altogether, I saw somewhere that it was being predicted that the world wasn’t going to end tomorrow, but that all things electrical would cease functioning for three days.

I’m still not sure where this one came from, except I know for sure that it would not have been from the Mayans. Unless of course they really were that advanced and had written on their calendar that electricity would not only be invented, but, that it would be down world-wide for three whole days starting on the 21st.

Still, if by some chance they were right, I’ll never know and that is how it should be. If we all knew when world was going to end I believe that we would all be a pretty miserable lot.

But if you don’t hear from me after tomorrow… 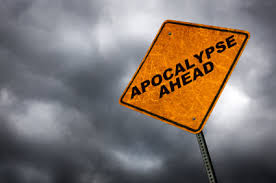