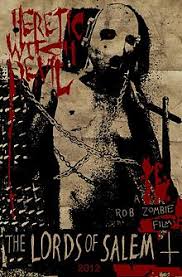 I first found out about the genius that is Rob Zombie when I stumbled across the film House of a 1000 Corpses. It was a case of love at first sight. Like most people who suddenly discover a new ‘loved one’ I read everything I could about the man and his beginnings.

It then became my mission in life to watch every film he directed.

So far I have managed to do just that. It is with bated breath that I wait for his latest foray into the weird, wonderful world of horror, The Lords of Salem. I had forgotten all about this upcoming feature until someone tweeted the latest teaser trailer (try saying that fast three times, go ahead I dare ya) and I managed to catch it earlier today.

Of course the main reason it had been tweeted was Zombie’s use of classical music in the teaser. The tweeter reckoned that it worked very well. I agree. I did try to imagine it with a more typical Zombie-esque heavy metal rock background and I couldn’t do. Probably because I’m not Rob Zombie.

This short teaser had me scrambling to google the latest information on his upcoming (and soon to be released in a theatre near you…well around Christmas time is it’s slated time of release) feature and who was in it.

The first thing I found out was that the (recently) late actor Richard Lynch‘s scenes had to be cut from the film due to his failing health and voice. The next thing I found out was that quite a few actors wound up on the metaphorical cutting room floor. Clint Howard who has made a career out of playing those ‘a few bricks short a load’ characters that hulk around in a lot of modern horror films, Udo Kier who seems to have been in just about every horror film I’ve ever seen (and that’s a lot, friends and neighbors) and lastly Camille Keaton, granddaughter of Buster (silent movie comic genius) and star of that iconic cult classic slasher film 1978’s I Spit on Your Grave.

*On a side note, I Spit on Your Grave was banned in the UK for years because it was labelled a ‘video nasty’ that would corrupt and spoil the youth of Great Britain. You can see how well that worked.*

I can only assume that all the actors who had worked with Richard Lynch could not repeat their work due to scheduling problems or possibly out of respect for the late actor. Whatever the reason it is a real shame that none of them (Richard specifically) wound up in the final film. Hopefully there will be footage of them on the DVD when it is released.

The plot, which I have borrowed entirely from Wikipedia’s entry is as follows:  Heidi DJs at the local radio station, and together with the two Hermans (Whitey and Munster) forms part of the ‘Big H Radio Team’. A mysterious wooden box containing a vinyl record arrives for Heidi, “a gift from the Lords”. She assumes it’s a rock band on a mission to spread their word. As Heidi and Whitey play the Lords’ record, it starts to play backwards, and Heidi experiences a flashback to a past trauma. Later, Whitey plays the Lords’ record, dubbing them the Lords of Salem, and to his surprise, the record plays normally and is a massive hit with listeners. The arrival of another wooden box from the Lords presents the Big H team with free tickets, posters and records to host a gig in Salem. Soon Heidi and her cohorts find that the gig is far from the rock spectacle they’re expecting; the original Lords of Salem are returning, and they’re out for blood.

Rob Zombie has, in my mind, never failed to deliver. His earlier films were raw, entertaining and slightly tongue-in-cheek. His move into re-imaging the Halloween franchise was superb considering the lack of artistic freedom that he had.

Now we have The Lords of Salem. Bucket loads of freedom, directed  and written by Zombie, plus a decent budget. These three facts alone combined with the brilliant cast list makes Salem destined for the number one position on the horror film parade.

The cast, just in case you are interested is as follows:

Does it get any better than this? I look at the plot and the cast and I cannot wait to see this film. I can only hope it opens before Christmas instead of after. I mean, what better gift can you get than the latest Rob Zombie film?