I have opted to review both these ‘films’ together as their total running time apiece is 61 minutes, hardly the length of your run-of-the-mill movie. Despite their title’s making use of the Ju-On phrase that had been developed by Film Auteur Takashi Shimzu, these films have nothing to do with the original films that shot Shimzu to such heights of popularity in the horror world.

The film’s credits do give a grudging (sorry) nod to Shimzu as the Ju-On creator with a ‘based on characters created by’ tag. Both the Ju-On’s were released simultaneously on the tenth anniversary of the original Ju-on’s as a sort of ‘honour’ to Shimzu and his films.

Ju-On: White Ghost (originally titled Ju-On Old Lady in White) is directed by Ryûta Miyake. I may be a bit obtuse, but after watching this film twice, I cannot for the life of me understand several things about the film. Why, for instance, is the ghost a ‘little old lady’ who carries a basketball with her everywhere? Why is that considered terrifying by those who meet her? What connection does this little old lady ghost have with the school girl in the yellow hat?

Do you even care?

That this is a homage is obvious. the director uses all the same shock tactics and build-ups that Takashi Shimzu used in his films that later became a standard for all his Grudge films. The only thing that Miyake’s film has in common with Shimzu’s original  is the murder of a family in  Japan‘s suburban world.

It is an interesting film. Scary in the right places and utilizing the slow build-up and disjointed segments that Shimzu used so well in his films. It is a homage and as such does not rely on blazing originality to make it’s point. At 61 minutes it is better to watch this one with it’s ‘sister’ film Ju-On: Black Ghost to give you a more ‘cinematic’ feeling when you’re done rather than the’special of the week’ feeling that a film just over an hour long leaves you with. 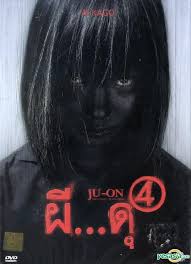 Now on to Ju-On: Black Ghost (or Girl in Black, the original title) it too is 61 minutes long. Directed by  Mari Asato the plot of Black Ghost is a bit convoluted and confusing. It never goes on to explain why the Grudge spirit in this film is all in black. Like the basketball playing grandma in the first film, we never find out why this black apparition is terrifying or why she’s even there.

The plot of this film revolves around a cyst found in a young girl (Fukie) that is the result of her ingesting her unborn twin while in her mother’s uterus. Sound familiar? If it does, it’s not because it was ever used as a plot device in any of the original Ju-On films.

Neither film has a whole lot going for it apart from the claim that they are ‘honouring’ the original films by Shimzu. They are worth a look but only as a stand alone curiosity and not as a sort of sequel or prequel of the original films. They are scary (a bit) and best watched at night.

As I am sitting here finishing this article, I have been playing the White Ghost on the telly. I have decided that the basketball playing grandma was much scarier when she was alive.

Final verdict? Don’t go out of your way to find these films, they’re not worth the effort. If you find them ‘accidentally’ like I did (live streaming on LOVEFILM) go ahead and watch them. They do have a certain novelty value. But if you want ‘real’ scares?