Directed, Produced and co-written by Matthew Vaughn (Layer Cake , Stardust) Kick Ass is entertainment with a capitol E. This fast-paced, tongue-in-cheek film is pure adrenaline pumping action and heart-string pulling re-action. Kick Ass was the film that almost died before it got made. Vaughn touted his screenplay (co-written with Jane Goldman, Mark Millar, and  John Romita Jr.) to every major studio in Hollywood. Nobody wanted to touch it. Eventually Vaughn funded the $30,000,000  budget himself by holding a fund-raising dinner. He then sold the film to Universal for more than he had originally asked for.
Kick Ass was based on a comic book created by Mark Millar and John Romita Jr. that Vaughn had purchased the film rights to before the comic was even published in 2008. In essence the film is about Dave Lizewski who decides to become a super hero known as Kick-Ass.  English actor Aaron Johnson does a brilliant job as Lezewski/Kick-Ass. Lezewski gets badly injured the first time he tries to “be” a superhero. He gets stabbed and run over by a car, which ironically drives off after hitting Kick-Ass. But for Kick-Ass this incident has been a blessing in disguise, something has happened to his nerve endings making him highly tolerant of pain.

Unfortunately because he was brought into the hospital naked, word gets around his school that Dave is gay. Although he is not, it works in his favour with the girl he has had a crush on for years, Katie Deauxma (Lyndsy Fonseca). It is through his friendship with Katie, that Kick-Ass first meets Hit Girl and Big Daddy. Dave (as his alter ego, Kick-Ass) goes to a drug dealers apartment to get him to leave Katie alone. Just after he ‘tasers” the drug pusher in the forehead (quite a comical shot considering the scene) an eleven year old girl wearing a purple leotard, with a cape and wearing a mask and a purple wig shoves a sword right through the drug dealer. This is Hit Girl – played brilliantly by young actress Chloë Grace Moretz who was surely born to play this part.  When he falls to the ground dead, Hit Girl looks at the remaining people in the room and says, “Okay you c**ts. Let’s see what you can do now.” After playing eanie meani minii moe, she picks a target and starts killing all the bad guys in the room. This all takes place while the song ‘Banana Splits’ by The Dickies plays full blast. It is this scene that became the defining moment for me in the film. It made me sit up and really pay attention to the soundtrack.

I could continue to write out plot points and scenes from the film, but that would be, if anything, repetitious and just another fans vision of the film. Instead I want to talk about defining moments in the film as dictated by the soundtrack.
The use of music in this film was nothing short of genius.  At the beginning of the film, when Dave is working on ‘becoming’ the hero that will be known as Kick-Ass (or as Big Daddy [Nicolas Cage] wryly observes while watching KA get tromped by a group of baddies, “He should be called Ass Kicked) the music is large and motivational “Stand Up” by The Prodigy is the back drop provided for Kick-Ass. Variations of the music are played throughout the film as Kick-Ass’s theme song. When we meet Hit Girl, the music becomes playful and fun, “The Banana Splits” by The Dickies. The music for Hit Girls introductory scene shows that this young girl sees all this death dealing as a fun game. She has been taught how to be a lethal killing machine by her loving father, Big Daddy. But to give Big Daddy credit in his search for revenge for the death of Hit Girl’s mother and his wife, and for being sent to prison by the Drug Baron Frank D’Amico (played superbly by  English actor Mark Strong) he has made the vengeance quest into a ‘game’ even going to the lengths of detailing D’Amico, his crimes and his henchmen in a comic book. 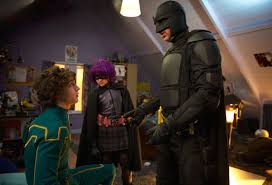 The next scene in the film that uses music to great affect is when Kick-Ass meets Red-Mist, in reality the son of D’Amico who is trying to ensnare Kick-Ass for his dad. The two “superheroes” bond as they drive to a lumber yard to help a damsel in distress. The song “Crazy” by Gnarls Barkley plays as the boys cruise in the Mist Mobile and it helps the two boys relate to each other. It is a brilliant scene. The scene of Big Daddy slaughtering D’Amico’s men in the lumber yard is almost show stopping. The movement of Big Daddy is in slow motion to start and then speeds up as the killing continues, it is like ballet. Rhythmic and splendidly choreographed. All this action takes place while the music  “In The House, In A Heartbeat” originally used in the  Brit-Horror film 28 Days Later… plays, it is another master stroke. The music itself creates feelings of loss, melancholy and fear. As the song continues it speeds up, gets louder and invokes almost a feeling of being damned and panicked. The use of this music as a backdrop to the mechanical death strikes by Big Daddy creates one of the most memorable scenes in a film.

When Hit Girl goes to rescue Big Daddy and Kick-Ass from D’Amico’s henchmen it is to Kanada’s Death, Pt. 2 (Adagio In D Minor) originally used in Danny Boyle’s film Sunshine. This track is called Strobe on the soundtrack. This scene with the combination of music, action and the sight of Big Daddy being burned alive, shouting short instructions to his daughter always moves me to tears. I’m not talking about little sniffles here, I’m talking about ‘hurting your throat’ sobbing.

The next place that Vaughn uses existing music to great effect is when Hit Girl goes to kill D’Amico. The entire sequence from Hit Girl’s entrance to D’Amicos headquarters to her entrapment in the kitchen sans ammo is perfect. The opening of this sequence sees Hit Girl dressed in her ‘street clothes’ standing outside of a revolving door. The door is to the downstairs lobby of Frank D’Amico’s building. The music playing is Ennio Morricone’s “Per Qualche Dollaro in Più” from the film For a Few Dollars More. The direct reference to the “Man With No Name” is deliberate and it works beautifully as this music plays while Mindy (Hit Girl) kills the henchmen in the downstairs lobby. The music fades as she gets ready to take the elevator up to Franks floor. When the elevator opens Mindy has changed into her Hit Girl outfit, while the music plays ( “No Power, No Responsibility”  by Henry Jackman) Hit Girl silently takes out the three guards outside the elevator, except for the last one. A single gunshot warns her prey that she is coming. She slides behind a statue and get her self pumped up for what is going to happen next. This goes on while the opening guitar music to “Kryptonite” by 3 Doors Down plays. When Hit girl starts her epic gun battle down the long corridor the song “Bad Reputation” by Joan Jett cranks out at full blast. I defy anyone to not shout or at the very least get goosebumps while watching this scene.

And of course the penultimate scene of the film, when Kick-Ass flies to Hit Girls rescue on the Jet Pack/Gatling gun to the strains of Elvis singing “An American Trilogy” is the ultimate show stopper. That magical Elvis Presley voice accentuated  with the slow motion sound of the Gatling Gun blowing the last three of Frank’s goons away, is a brilliantly shot moment.
Matthew Vaughn is now gearing up for Kick-Ass 2. I am hoping he can match the genius that he gave the world with Kick-Ass. I would love to see all the players come back to reprise their roles. Although Batman imitating Nicolas Cage (Big Daddy) can’t come back, cos he’s dead. But more importantly I hope that they don’t lose that near perfect musical scoring that worked to such a genius level on Kick-Ass.