Z Nation finally gets down to what was apparently their target all along, Z Nado. It seems a foregone conclusion that the company who brought Sharknado one and two to SyFy would feel compelled to add a little tornado action in this tongue-in-cheek zombie fest. Before the twisters come in and start slinging zombies all over the place, the team take a time out for some R & R along with a little additional bonding.

The Duchess of Cambridge or Kate Middleton, whichever you prefer is thinking of a hypnotic child delivery. 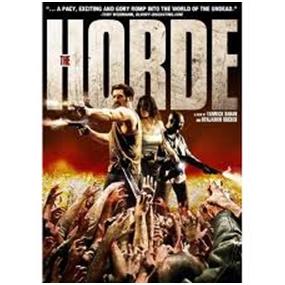 Directed by  Yannick Dahan and Benjamin Rocher (both of whom also co-wrote the film with three other writers) La Horde gives us the French take on the zombie apocalypse.

The film opens with a funeral. A small crowd of people are at the graveside of the dearly deceased. After the ceremony four of the mourners meet with an older woman who tells Ouessem (Jean-Pierre Martins) that she knows what they are going to do and to bring all of them back.

The four mourners are Ouessem, Jimenez (Aurélien Recoing), and Rivoallan (Laurent Segall) and Hélène (Marie Vincent) who at the very start I thought were gangsters. It turns out that they are cops and they are attending the funeral of a comrade who’s been murdered by a drug gang.

The gang is multi-national set of thugs headed up by Adewale (Eriq Ebouaney) and his brother Bola (Doudou Masta) and Tony (Antoine Oppenheim) and a few other thugs to fill out the numbers.

The cops approach the “abandoned” building and kill one of the gang’s lookouts. As they enter the building the “manager” comes out armed with a shotgun. They explain that they are there for Ade’s gang, telling the manager to forget he saw them and they go up to the criminal’s hideout.

As they are preparing to enter the flat, the manager shows back up and inadvertently alerts the gang to the planned entry. Rivoallan is shot through the door; Jimenez shoots the explosive that they placed on the door and gets injured. Bola comes out and shoots the manager and the cops are drug into the crooks lair.

Meanwhile, France is undergoing a catastrophic experience that includes explosions, fire and smoke and (although the group doesn’t know it yet) a zombie infestation. By the time the two bands find out about the zombie problem, they have lost most of the crooks and one of the cops. This little group form an uneasy alliance and decide to get out of the building.

As they fight their way through the building they meet René (delightfully played by Yves Pignot) who is the condemned building’s resident loony and ex-soldier. He joins the ever decreasing group and they all attempt to escape the zombie infested building alive.

The movie itself is entertaining but not overly so. I did not care for any of the police, they were not a cohesive group and everyone had issues with everyone else. The female cop was not likeable and she actually was the least sympathetic character of the group. No one did anything that made their characters stand out.

But, the bad guys?

They were great. The film belonged to Ade and Bola and Tony. These three actors owned this film. Every time that Ade (Eriq Ebouaney) was on screen he commanded the scene; Doudou Masta and Antoine Oppenheim as Bola and Tony had a similar effect when they interacted with anyone.

I have no doubt that Oppenheim’s resemblance to a younger Harvey Keitel helped to call attention to his character. Ebouaney has so much presence that you find it difficult to tear your eyes away when he is in a scene. Masta has a great capacity for clearly exhibiting pathos and angst. This trio blew everyone else away in the film and rightly so.

The only exception was Pignot as René who used his lifetime of experience as a film actor to shine as the Vietnam veteran who is obsessed with warfare and killing “chinks.” He was the only other actor who could compete with the three gangsters on film.

But despite the fact that I enjoyed the film (but not too much, remember) I hated the ending. It was not unexpected, considering the total lack of sympathy I had with the female cop, but I would have preferred a different solution to the film.

This is definitely a 3 star film (out of 5) and worth the price of admission for the crazy ex-soldier and the three drug cartel gangsters alone; definitely a Netflix film versus a “buyer.”

I will hold my hand up and say that the one thing that has never changed about me is my highly over-active imagination. I was born with it, and despite my most valiant attempts to get it to “grow up” it steadfastly refuses to change. The other night, for example, I was just drifting off in my (at the moment) empty house when…just outside my first floor window…I heard a noise that sounded like a brain munching zombie was in my front yard.*You know the sort of noise I mean, that arrrhhh sort of growl that they make in all the best zombie apocalypse films*

My heart galvanised itself into frenetic action, first by jumping up into my throat and then threatening to burst as the beating of the damn thing went off the f***ing chain. My imagination, already working overtime just on the zombie alone, started going through the house and counting the number of glass windows in the house and the big glass doors at the back of the house. Which are behind a fence, thank God, and…damn it
the gates not locked because the all the damn rain we’ve been having has caused the wood to swell up!

In the very brief moments where I felt sure that I was going to have heart attack number two, I did not see my life flash before my eyes. I did see one of the better known English news anchor’s looking solemnly into the camera and saying,
“54 Year-old Man Dies from Over-Active Imagination, News at Ten…

This little scenario snapped me out of my panic driven reverie and allowed me the time to actually listen properly to the “zombie growl” that seemed to be in my front garden. As my heart beat slowed, I strained to hear the growl again. I was rewarded by the sound emanating from within the bedroom versus the front garden, but, the sound was kind of far away to be in the same room. It didn’t sound right. Despite the nearness of the growl it was too muted to be coming from in the bedroom.

As I sat up in bed, I heard it once more. This time it was a bit louder and seemed to be in the bed with me. I sat on the edge of the bed and pondered this (while looking over my shoulder warily in case I found a zombie sharing my bed) when the sound made itself known once more. Only this time, wide awake and a lot more “with it,” I realised that the zombie was in my tummy.

My stomach was growling; loudly and insistently it sounded just like a slightly quieter version of a zombie’s brain munching growl. Obviously, my state of “semi-sleep” could not recognise the sound and my over active imagination did the rest. Of course, the fact that it was night-time (half one in the morning to be exact) and that I was alone in the house for the first time in over a year, helped to fuel my, still, over active imagination.

I got up and had two croissants with Proactive cholesterol reducing spread and strawberry jam. This had the desired effect of making me feel sleepy again and I went back to bed. The rest of the night was pretty much eventless, except for the odd (and I do mean odd) dream.

It makes me think of an episode that occurred when I was 8 years-old. My brother, who had made his entrance into the world a year previously, was in his cot and sleeping, said cot had several rows of wooden beads on a thick wire that could be moved. Sort of like a giant baby abacus.

The rest of the family, Mom, Dad and I were in the front room watching Get Smart. Now this show was a comedy. It starred Don Adams as a hapless and inept secret agent who, despite his obvious shortcomings, was the best spy in the world. *I did say it was a comedy* This particular episode had Adams and his sexy partner “99” on board a fog covered ship where a man with a peg leg and a cane was murdering passengers on the ship.

The sound effects department did themselves proud on the sound of old Peg Leg crossing the wooden floor of the ship. It sounded like wood on wood and combined with the eventually accompanying creepy music, it really impressed the hell out of me. So much so, that when I took advantage of a commercial break to go quickly to the toilet, it obviously preyed on my overactive imagination to the extent that when I heard what could only be peg leg coming down the hall to kill me, I freaked out.

The noise that Peg Leg was making sounded like it was right outside the bathroom door. I stood transfixed and as rigid as a bronze statue. My vocal cords refused to work. When I tried to scream out to my parents but  all that came from my mouth were tiny croaking sounds. I kept trying though, for at least twenty more minutes. I would still be there if my Dad had not felt the urge to displace the Coke that he’d been drinking while watching the show.

It took him and my mother a further ten minutes to coax me into unlocking the door. They then had to explain to me that a) it was just a TV show, b) it wasn’t real and that Peg Leg did not exist, and c) the wooden sound I’d heard was my brother playing with the wooden balls on his cot. Neither I or my parents ever forgot that evening; me because it meant that I was no longer allowed to watch Get Smart until I was older and them because they found it hysterically funny.

As you can see, I’ve had a very over active imagination for some time now. Of course, I am able to calm myself down now as opposed to my parents having to do it. Which is a good thing considering that they live clear over the other side of the world, or at least the other side of the Atlantic Ocean and in the south. Sometimes though, it can be difficult to take charge of my elephantine imagination that seems to have Red Bull for blood and is capable of wiping an entire jungle out when it stampedes.

Still, I can do it and after the dust has settled I can laugh at it and wonder how on earth I can still have such a young imagination at such an advanced age. So just in case there comes a time that I cannot “calm the f**k down,” don’t be surprised if the news anchor where you live says, “54 Year-old Man Dies from Over-Active Imagination, News at Ten…

It will be me, the elephant will have won and I will be watching Get Smart somewhere in (hopefully) heaven and trying like hell to avoid old Peg Leg.