Zatoichi is a Japanese “anti-hero” popular in their culture. No less than 26 films have been made featuring Zatoichi and a long running television show which aired 100 episodes. Part of the Zatoichi legend is his ability to win at gambling as he can hear the dice. He also gives massages, plays music and sings, and practises acupuncture.

Zatoichi even got the Hollywood remake treatment in 1990. The 17th film in the series was remade with Rutger Hauer playing a blind swordsman. Titled Blind Fury, it wasn’t a bad film. I watched it before I had even heard of Zatoichi and thought at the time it was marvellous. Of course, I am a huge Rutger Hauer fan, so that may explain a lot.

Takeshi Kitano adapted the screenplay of his version of Zatoichi. He also directed and edited the film. Kitano’s version is musical. Not in the classic sense, you won’t find samurai suddenly bursting into song a la The Sound of Music. But the film itself is musical.

The rain makes a musical sound as it falls and drips off objects. The villagers working in the fields make a rhythmic noise as they collect vegetables and weed their plants. This pattern of music making does not over indulge or become obtrusive. It is noticeable mainly when there are scenes with no dialogue. Sound is amplified when, we the audience, hear things from Zatoichi’s point view, so to speak.

The battles (which Takeshi wanted to be choreographed as realistically as possible) where the blind man takes his sword cane out to fight, have sword slices and cuts that are louder than usual, as if we are hearing it as Zatoichi is. The blood was “overly” CG’d at Kitano’s request. He felt the audience needed a bit of relief from the brutal nature of the battles and the high body count.

Zatoichi discovers a small mountain village that is being ruled by a powerful yakuza gang. They moved into the village and killed the “legal” rich landowner who was the villager’s protector and employer. The gang bully and terrorize the small village. Then Zatoichi arrives and starts carving his way through the yakuza gang. The leaders of the gang employ a Ronin to be their body-guard.

Ronin were samuai without a leader. Their lord and master is either dead or has no need of their services. Ronin roamed the countryside selling their sword skills to the highest bidder. Takeshi Kitano wisely chose Japanese actor Tadanobu Asano to play the ronin Hattori Gennosuke. Asano has been described as the Japanese Johnny Depp. He is a versatile and brilliant actor who has made the cross to Hollywood, working on Thor, Battleship and Thor: The Dark World (due for release in 2013). Credited with 82 films as an actor and three films as a director, Asano is perhaps best known for his over-the-top S&M villain from Ichi the Killer.

The fight between Zatoichi and Gennosuke is long, brutal and brilliant. It was also a nod to Asano’s role in Ichi the Killer, as Zatoichi is also referred to as “Ichi” in the series of films about the blind swordsman.

There is a sub-plot about two beautiful geisha (one of whom is a man) who play music and sing before they murder their rich clients. They are on a revenge mission as it was their family who were murdered by the yakuza gang who took over the village.

Beat Takeshi‘s Zatoichi is a big budget affair that at last count pulled in over 32 million dollars at the box office. It won the Silver Palm Award and Cannes and has done very well in the home rental department. The film features Takeshi’s low key and, sometimes, slapstick humour that is his trademark. One scene in particular sums up the humour of Beat Takeshi.

The village idiot (or simpleton) likes to dress up as a samurai warrior and “train.” This consists of running around his ramshackle shed of a house yelling at the top of his lungs. This if funny enough (as he does it through a good portion of the film) but add Zatoichi into the scene and it becomes hysterically funny. I won’t spoil the scene for you, just watch it and see.

The film looks beautiful and has Kitano’s stamp all over it. As he edits his own films, he puts his personal touch and rhythm to ease film he does. The colours are sumptuous and the lighting is spot on. The blood is all CG. As explained before, he wanted the blood to be very intrusive. In his words to the special effects department he wanted the blood to, “look like flowers blossoming across the screen.”

I have watched Takeshi Kitano’s Zatoichi repeatedly and find something new in it each time I view it. I would highly recommend that you watch it; if for no other reason than to enjoy Beat Takeshi’s version of this popular and classic Japanese character.

Like Loading...
Based on Hideo Yamamoto‘s manga and directed by the iconic Takashi Miike, Ichi the Killer has a cult statusthat very few other ‘cult’ films enjoy.

As popular with audiences now as it was in 2001, Ichi has lost none of it’s power to mesmerise, horrify and shake-up the viewer.

Starring Tadanobu Asano (Thor, Zatoichi, Battleship, and in 2013 Thor 2), Asano is the closest thing Japan has to a superstar. His work on Ichi as the sadomasochist Kakiharo enabled him to “steal the show” and  made him a cult favourite with fans.

Nao Ohmori (not as well known to western audiences, but a jobbing actor who has been working since 1997) played Ichi. Ichi is mentally unbalanced and finds violence sexually arousing. He has been brainwashed by Jijii – Shin’ya Tsukamoto (Tetsuo, Tetsuo II: Body Hammer, Bullet Ballet) into believing that he witnessed a rape when he was younger and not only did he not help the girl, but he was aroused by it. Jijii convinces Ichi that he must kill the boys who perpetrated the rape and he points them out for Ichi. 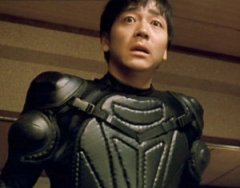 The first ‘perpetrator’ is Anjo a Yakuza boss whose enforcer is Kakiharo. Ichi using the razor sharp blades in his boots, cuts Anjo into pieces and Jijii disposes of the body parts. Kakiharo wants to know where his boss is and suspects a rival Yakuza gang of killing or kidnapping him.

Jijii makes sure that Kakiharo suspects the rival gang in the hope that they will kill each other off, with Ichi’s help of course, and then he will run that area of town.

Ichi The Killer is typical Takashi Miike. Gallons of blood. Violent acts that the camera shows unflinchingly. And of course black humour crops up in every other scene.

Some of the violence is almost unwatchable. In one scene, Kakiharo is questioning another gang’s boss. They pierce the skin all along the back of his body and hang him face down from the ceiling. When Kakiharo does not get the information he wants, he pours boiling oil on the bosses back. The combination of the smoke, sizzling sounds and the victims screams make this one of the hardest scenes in the film to watch.

Yet Miike’s humour pervades the film. Whether it is Ichi gleefully telling a girl that he has saved from being beaten to death, by her boyfriend by killing him,  that now he can beat her. She is, somewhat understandably, not thrilled by the proposition.

Or when one of Kakihuro’s minion decides that he doesn’t want to look for the missing boss Anjo any longer, Kakihuro slams a board with a nail in the end onto the minion’s foot. This action changes his mind and he decides he does still want to help Kakihuro and they all walk down the street, with the minion dragging the board that is still impaled in his foot.

And of course the most amusing of all is the reason that Kakihuro wants to find his boss. It turns out that no one else can give him the pain he desires like his boss.

This is classic Takashi Miike and one you definitely need to see, if you haven’t already.