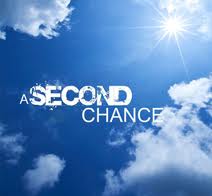 Yes you read the title correctly, it says second chances – plural. I know that a lot of folks never get a second chance – singular. They go through their lives either successfully, poorly, middle-of-the-road-ly, or otherwise and they never get another snatch at the brass ring or another bite of the apple.

I seem to have spent my entire life getting these “back-hand” second chances.

I remember when I turned my back on acting the first time. My first wife did not like me being “in the business” and since I was very young and very much in love, I turned my back on my passion. Years passed, the bloom went off the rose of my first marriage and I got divorced.

I didn’t handle it well. Too young and too broken-up, thoughts of ending it all danced around the periphery of my mind. Not seriously though, thank who-ever: but I was pretty damn miserable for a long time. I moved to England, courtesy of Uncle Sam, and not long after arriving in the UK, I was drafted into an amateur theatre group.

I was back to acting again and I was loving it.

Then my job began to interfere and I had to turn my back on it again. Time moved on. I got married again and just before I got reassigned to The Netherlands (Holland) a mate of mine got me a job as an extra on an American TV movie, The Last Days of Patton. I worked for over 12 hours playing a WWII soldier who goes through a rifle drill with a whole platoon and we then got to meet General Patton (George C Scott).

It  was a memorable moment. Mr Scott was personable and approachable. He spent his time between takes talking to us Air Force guys who’d learned to do a rifle drill after a couple of hours of training by the film’s technical advisor. I remember thanking the “guy upstairs” for giving me this, a sort of taste of what I’d been missing.

Later when we’d settled in at our new Dutch home, I got to do some radio work and through the AFN guys, I got some film and TV work. Again getting a little taste of what I had turned my back on so many years ago. My daughter was born on the day that I had two auditions for a couple of American television commercials. I decided that my daughter’s entrance into this world was more important and called the casting folks up to express my apologies.

I got a few more little jobs here and there and met some interesting people and almost got a couple of great acting jobs. But fate had another idea and these close grabs at the brass ring, missed.

Later, when we moved back to the UK, I got out of the Air Force (I didn’t retire, I got out via the early out cut-back program) and did some more voice-over work. I even did some extra work. But reality kept creeping in and kicking me in the face. I kept trying to write the whole time I was being diverted from the acting side of my life. That activity was as doomed as the acting. Something always got in the way.

All thoughts of creating something either physically or mentally were killed off and buried.

Life went on, I found a good job that allowed me the time to enjoy my family and watch my daughter grow up. The job also came with a great retirement set up. It wasn’t the best job in the world and it was not anything that I’d have chosen for myself as the “last” job I’d ever do.

Then, injured at work and off for just under six months. Right after I start back to work, I have a heart attack. Two surgeries; one an emergency surgery that left me with pretty much permanent damage. The end result of this was my life was saved, barely, and I was ill-health retired from my job.

I won’t lie. I was a little depressed about losing this job that I’d done for just under ten years. I didn’t love it, but I like most of the people I worked with and I’d finally gotten top pay for my job. I felt like the character on films and TV that shrugs and says, “Eh, it’s a living.” But I was panic-stricken.

I had no idea what I was going to do.

I still don’t; but I’ve finally woken up to the fact that, for what ever reason, I’ve been given another second chance.  I’m not sure how many this is now, but it’s a lot. I don’t know if I’ll wind up doing anything creative or not. I do know that I’ll keep blogging, because it is a bit addictive now that I’ve started it, but I kind of feel like the sky’s the limit at the moment.

What is really evident to me is that of all the second chances I’ve been given, this one is perhaps the most important. All the previous ones were sort of career or personal goal oriented.

This one is a second chance at life.

I am going to try not to waste it.