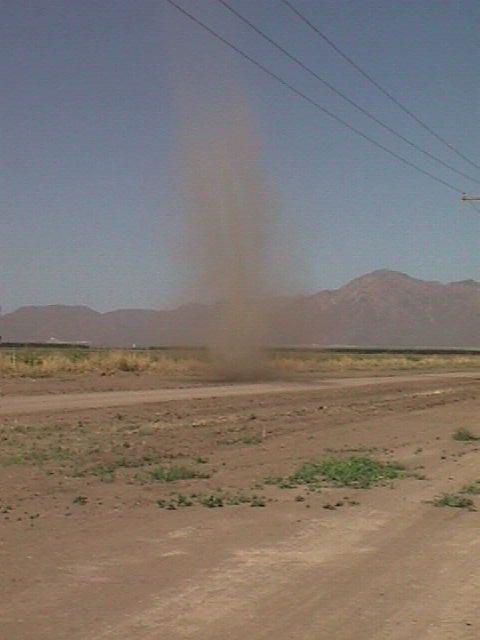 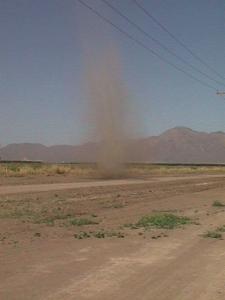 Living in the real desert has definitely been an eye opening experience thus far. (Not to mention a chance to clean my cluttered mind of the trappings of too much civilization, which has been an unexpected plus.) Recently the weather has matched my life to a certain extent. A lot of air turbulence, aka wind, has kept the dust and sand in constant upheaval. Quite a number of “dust devils” aka mini cyclones have been created and move across the hardpan floor recklessly ignoring traffic to traverse roads and avenues.

A few days ago, a volcano in Chile erupted. This lava-spewing spectacle occurred twice in a short time period, if I can remember the Facebook notices correctly, and like the Icelandic eruption a few years back, it has affected the weather noticeably. Cooler temperatures, clouds, a lot of gusting wind and heavy showers are making their presence felt in the normally hot area.

Clouds of debris have entered the atmosphere once again and will loom up there for some time. With my sporadic Internet, and no television, I do not know if the event has messed with air travel. The Iceland volcano certainly did; shutting down flights for several days in England and other countries.

Years ago, when I lived in New Mexico with my first wife and our son Donovan (who was a fearless 8 or 9 month old that walked boldly off the end of the settee…repeatedly) sand storms were a regular occurrence and dust devils could be spotted easily.

During one sand storm, according to my white-faced then wife, I was almost decapitated by a whirling sheet of galvanized steel. However, the most spectacular sand storm took place during the filming of a Sean Connery film, “Wrong Is Right.” The film set was in White Sands and a small group of locals were there to watch the professionals go through their paces.

The wind picked up steadily and suddenly, in mid-scene, a white wall of sand could be seen approaching. A park ranger announced over the PA system that if people wanted to leave, now was the time to do it. Along with a number of other locals, the wife, baby and I left, only to be caught up in the advances of the wall of sand.

Before we got into the car, a cameraman on the crew grabbed my arm. Sounding like the epitome of a “surfer” he excitedly asked, “Whoa dude! Is it like this all the time around here? This is so cool!” I agreed and suggested he take cover and protect his equipment as these natural events could strip paint off cars and deliver sand in unbelievable places. 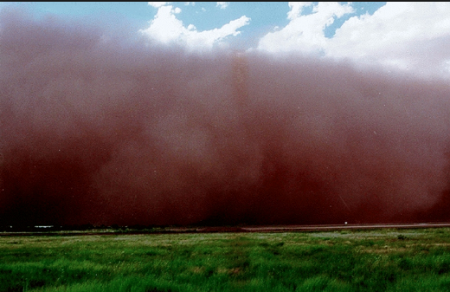 In those days, sand storms were a new experience. I had only ever been through one similar incident a few years previously. A dust storm had roared over the Oklahoma state line and enveloped a small Arkansas town where I was doing drywall work. Purple clouds filled the sky and suddenly the whole world was swirling dust and darkness.

Back to present day and my ride through the dust devil. As I was already fighting against 11 to 17 mph winds, my concentration was more on getting home than on the birth of the mini cyclone up ahead.

For a split second I thought of the Bill Paxton, Helen Hunt film “Twister” and their experiences in dealing with tornadoes. The cyclone grew steadily, from a few bits of debris swirling around to a lot of sand, dust and more debris building up to a small twister about six feet in diameter.

Biking with my eyes squinted against the wall of wind pushing against me I noticed that the dust devil was almost stationary ahead of me. Up to the left of me, it seemed to be waiting for me to pass. As I drew nearer, it began to move into the road. I thought briefly about stopping and trying to get a video of the thing.

It was not going to happen.

The thing was upon me in an instant. Suddenly all the pressure that had been trying to force me back the way I came stopped. The bike and I were being pummeled back and forth. The wheels actually slid sideways for a second or two and the bike began to wobble in the wind.

Luckily I was wearing my prescription sunglasses so the dust and debris did not blind me. Eyes almost shut I could see from inside the small cyclone. I felt a little like the surfer-dude cameraman from the Connery film being filmed in 1981.

Just another experience of living in the real desert to be savored; riding a bike through a dust devil, aka mini cyclone, and living to tell the tale. 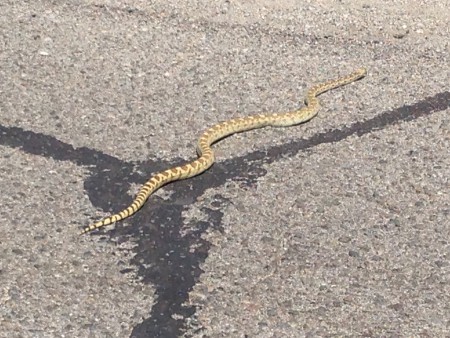 On the way to town today I came across a lady on the “main road” out of the estate. Standing by the side of the paved surface, clutching a hoe, she moved toward the center of the street and waited for me to approach on my bike.

“You could have crossed over,” I said, “It will take me ages to get to you.” This as I slowly moved toward the stationary gardener. It was my impression that she was heading to the desert on the other side of the road.

“Is that a rattler?”

The question caused me to turn, as I had passed her already, and head back to where she stood. “Careful, he’s right there,” she pointed to the rock and cactus frontage of the lot to my right. I looked but saw nothing that resembled any sort of desert creature. Stopping and dismounting I walked to where she was and turned to follow her pointing finger.

In the shadow of the property’s boundary fence, the long serpent was contentedly stretched out and occasional flicks of its tongue tested the air as it relaxed in the shade. It was well over four feet in length and unperturbed by all the attention. Whilst we discussed what sort of snake it was, the thing began to slowly move along in the shade.

Several attempts were made to photograph the placid creature but the shadows he, or she, stubbornly clung to, made it difficult. While we stood about taking snaps with mobile phones (cell phones) and deciding that the lack of rattles meant that it was not a rattlesnake, other folks from the area congregated to look at the traveler.

The calm snake, which a friend has guessed might be a Pacific gopher snake, moved into the hard pan after traversing a long stretch of fence line.

This is the first live snake I’ve come across. The only other one was dead hit, apparently, by a car on the road running parallel to the highway. Red and grey and not rattles either, I still have no idea what sort of snake it was. The visitor also was the first creature that moved slow enough for me to take a picture of.

Yesterday I saw a kangaroo rat nimbly hopping across the vacant lot across the street from my home. It was huge and, for a rat of any kind, cute. Bold as brass, it ignored me completely and headed for a huge cactus with yellow “roses” on it. He, or she, disappeared as I got closer and despite standing there for a while it did not reappear.

Not counting the time spent living in Las Vegas, Nevada, the last time I lived in a desert setting was in 1980 – 1982 in Alamogordo, New Mexico. I cannot remember too much about colors of flowers or seeing too many creatures scurrying about, but I do recall falling in love with the desert itself. White Sands was just down the road from my trailer and my first wife, along with our son, went out a few times to that amazing gypsum land.

The entire time I lived in England, the question of returning stateside was continually cropping up. I said, at the time, that only if I could live in the desert…

Well, here I am. Living in the great Southwestern desert. The land of Billy the Kid, Apache warriors, the Navaho and Mojave. Each time I ride my bike into town my imagination runs riot. Reading about days gone by in the state, and the local area, fuels my trips of fancy. Wild west outlaws, larger than life characters and prospectors searching for personal riches reside in my mind.

I have been talking to a neighbor about looking for gold and he has relayed some marvelous tales of robbery and mining. I will be sharing some of these stories soon. In the meantime, I shall be researching this land that features so heavily in literature and film.

About two-thirty in the morning, after dozing on the couch, I went into the back garden to have a cigarette. Half-asleep, I opened the back door and stepped out, lighting my smoke. I was instantly jolted awake by the sight of snow drifts. I was standing in one that covered my back door step. There was a veritable blizzard outside and it had apparently been going on for some time.

I got so excited about the snow that it took me ages to drop off to sleep when I then went to bed.

Snow has the capacity to both magically transform me into a child again and to excite me beyond reason. No other type of weather has this power over me. In fact, the only thing that even comes close is the power of smell. I know that scientists have said that a scent can trigger the most amazing memories. Amazing enough that you feel as though you have travelled back through time. This “time travel” experience has happened to me a few times. I can count on the fingers of both hands the amount of times it has happened. Snow, however, always instantly affects me.

I remember vividly travelling back from Sacramento, California with my parents at the age of five.

On this momentous trip, we drove through a blinding snow storm in the mountains near Flagstaff, Arizona. The flying snow was so thick, it froze and then broke our wind-shield wipers and my father had to brush the snow off the wind-shield (while he drove) with his arm.  We finally our-drove the snow and arrived in Alamogordo, New Mexico in the late afternoon. Alamogordo is right at the edge of the White Sands Missile Range. It is in the desert. It has sand, cacti, sagebrush, mesquite and tumble-weeds.

And on this memorable occasion, it also had snow.

As we all slept in our Rocket Lounge motel room, the snow had caught up with us. When the morning arrived my parents woke me up and told me to open the door and look outside. In the night the snow had transformed the desert into a world of white. Everything was covered in the stuff. Even the tumble-weeds were white. I was ecstatic. It made an everlasting impression on me, that forty-eight years later, is still fresh.

So this morning when I stepped out into the snow in my back garden I was transported. I “time-travelled” back to Alamogordo, New Mexico. I re-lived that excitement of seeing the snow covered desert and the memory was as fresh as the snow covered world outside my window and as crisp as the air surrounding it.