Written and directed by Martin McDonagh (Seven Psychopaths, In Bruges), Three Billboards Outside Ebbing Missouri is a blackly comic look at small town mid-America, guilt, parental grief and not a little survivor anger. Frances McDormand (Fargo, Blood Simple) stars as Mildred, the mother of a girl raped and murdered too long ago and the police have made no head way in finding her killer. Sadly, despite much promise and a pretty good script, the result is a little hit and miss.

Woody Harrelson is Chief Willoughby; a beloved local figure of authority and calm. Mildred focuses on the chief with her three billboards of “shame”and accusation. Sam Rockwell is Dixon; one of Willoughby’s deputies, and the man is a shambling mess.

The plot revolves around Mildred’s overwhelming guilt, which overrides her sense of grief, and it is this guilt that drives her through the entire film. Three Billboards Outside Ebbing Missouri almost feels like a modern noir thriller with darkly comic overtones. We side with both Willoughby and Mildred in this tale of attempted retribution and atonement.

Later, we can almost get behind Dixon’s attempt at solving the murder but the man is such a neanderthal that his dreams of becoming a proper detective can really be no more than a pathetic pipe dream. Peter Dinklage has a cameo as the village “dwarf.” (A term that his character tosses out after a disastrous meeting with Mildred and her ex.)

Three Billboards Outside Ebbing Missouri starts out well. McDormand manages to almost match her performance in the 1996 Coen Bros film Fargo. We are behind her every step of the way, even more so when we learn her ironic and terrible secret. She and Harrelson’s character enter into a short sparring match that brings the film’s character’s to life brilliantly.

This “battle” is short-lived however and that changes the face of the entire story. Herein lies the problem with Three Billboards Outside Ebbing Missouri. While the billboards themselves are an excellent plot device, their importance shifts about a third of the way through. We focus more on Dixon and Mildred and because of the deputy’s character, the film becomes a bit more than hit or miss with its tale.

The film does entertain though. McDormand is a treat, Harrelson scores much better here than with his excursion in the “Ape” film and Rockwell proves yet again that his range is very impressive, if somewhat misplaced in this role.

Caleb Landry Jones is great value in his cameo role of the one man in town who dares to allow Mildred the chance to thumb her nose at the local Sheriff’s office. (Jones is also superb in another 2017 darkly comic film, the horror offering “Get Out.”)

John Hawkes is spot on as Mildred’s smarmy ex and Abbie Cornish is delightful as his 19 year-old airhead girlfriend. In essence, no one puts a foot wrong in the film but the character’s, especially that of Dixon, act in ways that do not really fit their limitations.

Three Billboards Outside Ebbing Missouri feels like a Coen Bros film (McDormand is married to Joel who, apparently, told her to take the role of Mildred as it was written expressly for her.) but…different. Overall it fires on most cylinders and has an ending that can only be described as “noir-ish.”

This is a solid four star film that keeps the viewer locked on to the events as they unfold onscreen. One can easily see McDormand nabbing another Oscar this year, even though the competition will be fierce (The Post.)

Matt Damon and Matthew McConaughey are old pals, at least according to Damon they are, which may explain why the best buddy of Ben Affleck is in Interstellar playing against type. The Elysium star has almost always been synonymous with the Argo star and director as the two grew up as best friends in Cambridge, Massachusetts. In his most recent film role, the “closely guarded secret” that Christopher Nolan kept under wraps for as long as possible, Damon plays Dr. Mann the second explorer on the other side of the wormhole that Cooper and co visit in Interstellar.

‘Laggies’ Keira Knightley Proves Growing Up Is Hard to Do

In Laggies, Keira Knightley proves that growing up is hard to do, especially if you are a step or two behind your 20 something friends who all have their lives seemingly sorted out. Directed more than capably by Lynn Shelton (Touchy Feely, Your Sister’s Sister) from a screenplay by Andrea Seigel, in her first effort, the film looks at Megan, who at 20 something still stops by to be her dad’s “sign girl.” She has also developed an inability to connect with her oldest and dearest friends. 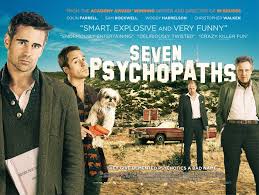 Written and directed by Martin McDonagh Seven Psychopaths has a pretty hefty cast list; a wandering storyline and has six, not seven psycho’s in it. I only mention it because a third of the way through the film, it is somewhat obliquely mentioned.

Like I said the cast list is pretty damned impressive. And while I am not a huge Colin Farrell fan, I did enjoy his performance in this film.

Now, about the plot and the storyline; It is, at best, a little eclectic and esoteric. It follows the everyday interactions between Colin Farrell’s character who writes for a living. Marty’s best friend is Billy (Rockwell) who is a psychopath who kidnaps dogs to sell back to their owners with the aid of Hans (Walken).

Throughout the film there is a red hooded person who is “capping” mid level mafioso thugs and leaving a jack of cards on the bodies to show that they’ve been assassinated by the jack; presumably this “calling card” is sending some type of message.

Meanwhile back at the ranch,  Marty is struggling to write his latest screenplay about, seven psychopaths. But Marty doesn’t want this to be a standard blood, guts and gore shoot-em-up, he wants all his psycho’s to be pacifists. 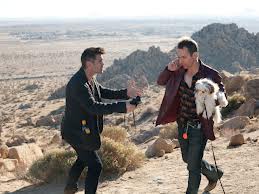 Woody Harrelson plays Charlie another psychopath who is a mafia kingpin and who just happens to be devoted to his shitzu, Bonnie. Of course Billy kidnaps Bonnie and the whole film’s violence level increases.

I can’t really reveal any more or I’ll be seriously spoiling a lot of the film. But I can honestly say that after watching it, I felt ambiguous about it. I couldn’t decide whether I liked it or not.

The film looks good. It amuses in parts and disturbs in others, but in neither instance does the film overwhelm or overly impress. My two favourite characters were Hans and Marty (which says a lot as I don’t really care for Farrell as I said before) but Rockwell as Billy did entertain…a little; which also says something as I adore Rockwell in almost everything I see him in.

Either that, or, they left something out.

A 3 out of 5 stars just for the cast alone…and for the flare gun. 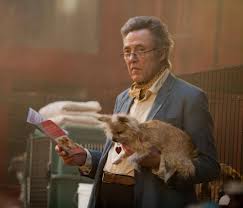