Set in 1970s Australia, Cut Snake features a smoldering Stapleton Sullivan who moves through most of the film like a big jungle cat. He visits his old mate Sparra Farrell (Alex Russell) and finds him engaged to Paula (Jessica De Gouw).

Directed by Tony Ayres, from a screenplay by (Blake Ayshford),  Cut Snake puts the audience on tender hooks almost from the first frame. Pommie (Sullivan) travels from Sidney to Melbourne to see his pal, Sparra.  Once he arrives,  Pommie wastes no time integrating into  Sparra and Paula’s life.

As the fim progresses the audience learn more about Sparra and Pommie. Pommie is all testosterone fueled aggression and  he seems full of cheerful menace. Sparra is adamant that he has gone straight. Pommie sets about tearing down his friend’s new life after prison.

Ayres gives the audience a brilliant bit of misdirection. The first part of Cut Snake is full of Sparra’s unease at Pommie’s emergence from prison.  Both men increase the tension level with their “back and forth” and it seems that initially Pommie is interested in Paula.

The film then shifts direction and it is revealed that Pommie is not interested in Sparra’s fiancée at all.

Cut Snake is a nerve wracking film to watch. Even after Pommie’s true motivations are revealed, the tensions do not abate  one iota. The vast majority of the film is spent waiting for that other shoe to drop.

Midway through it does and it lands heavily.

At its core, Cut Snake is a romance film set against a thriller background.  All the actors really deliver and delved deep to find their characters’ inner truth.  The unease felt every single time that Stapleton appears on screen, never goes away.

The desperation felt by Sparra, who frantically tries to go straight, is equally present in Pommie. The violence prone hard man is pure frustrated  rage topped by a crushing longing for something that, he learns eventually, he cannot have.

Ayres puts the film together brilliantly. The scenario is compelling and nigh on impossible to stop watching. Sullivan looms large in every single scene he is in.  He emits a presence so intense it is difficult to imagine sharing screen time with the actor.

The music screams the ’70s, from Linsey de Paul to David Essex singing the eternally catchy tune Rock On,  it all brings 1974 Sydney to living breathing life.  The clothes look perfect and everything from the sets to the cars is spot on.

Sparra’s carefully laid plans crumble to pieces as Pommie refuses to leave. He drags his old cellmate down back into a life Sparra swore to leave behind.

Sullivan, who is currently wowing the world on Blindspot makes Pommie bigger than life. The former convict is all muscle and attitude in his quest for what he desires. By the end of the film viewers who are not familiar with Sullivan’s work will realize he has Goliath sized chops.

Alex Russell holds his own in this intense story of love, betrayal and criminal activities down under. De Gouw does not shirk her acting duties either and all three really deliver in this  Aussie thriller.

Cut Snake is streaming on Hulu  and is definitely worth watching.  This is 5 star entertainment. The film, almost two hours long, never drags and is impossible to stop watching.  Check out the trailer below: 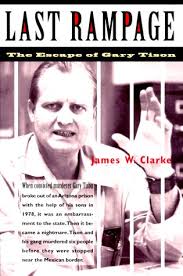 Quartzsite is not just the burial place of a historical figure, Hi Jolly lays at rest there with a favorite camel to keep him company in the “Hereafter,” it is also a spot where Snowbirds flock every winter to keep warm while the rest of the country shivers in the blustery cold. This small quiet burg also has a horrific dark side. In 1978 Gary Tison, escaped from an Arizona prison and his route of meandering escape, that ran over three states, took him right through Hi Jolly territory.

Living up to his reputation as being a cold-blooded killer, Tison’s trip through the quiet Arizona town was marked with murder. In James W. Clarke’s book “Last Rampage: The Escape of Gary Tison (Houghton Mifflin Company 1988) the second chapter of the book is devoted to the Lyon’s family murders. This wholesale slaughter took place just outside Quartzsite off I 95 on the Yuma side of town.

After Tison Sr. and Randy Greenawalt shotgunned the 24 year-old Marine Sergeant John Lyons, his wife Donnelda and their son Christopher to death, along with John’s niece Teresa Tyson, who died after the attack from her injuries, they took the family’s car and continued their wandering path to Mexico.

James W. Clark writes about the escape and his novel follows the journey and interactions of this small group of men. The author reveals that he and his young family were very near the fugitives as they fled authorities. In Colorado where Tison and his group murdered a honeymooning couple for their van, the writer and his wife spent a sleepless night. They were convinced that some unspeakable evil was watching their temporary campsite and only later did they learn that Gary Tison, Randy Greenawalt and Tison’s three sons were literally yards away.

Clarke does a good job documenting the flight of Tison and co. He lists all the various players and does a good job with backstory on each. He also remembers to pay attention to the victims of Tison and Greenawalt. At no time does the author forget to show the cost to surviving family members of the blood-soaked journey of the fugitives.

The book also looks at the power Tison had over his family and others who came into contact with him. A picture is drawn of a charismatic and manipulative man who appears to be pure evil. Tison’s end, dying of dehydration and exposure in the Arizona desert yards away from water, is one of poetic justice and not for the faint hearted. The man suffered an incredibly painful death and one that many would feel is still inadequate for the crimes he committed.

While telling Tison’s story, Clarke also reveals the corruption that was prevalent in 1970s Arizona penal system. He touches briefly the Don Bolles murder and the connection with Tison.  While the newsman’s death was the direct result of his investigating the mafia, the corruption pointed out by Clarke had to do with the correction system and its apparent policy of hiring inept individuals to run their prisons.

Consider this: The governor of the prison where Tison escaped was given multiple warnings that Tison was planning to illegally leave the institution and did nothing.  It is amazing that the Lyons’ and Judge’s families did not take the man to court as being an accessory to the murders committed by the fleeing criminals.

This is a chilling and disturbing account of one of the most horrific murders committed in the Southwestern desert. Prepare to be upset and frightened. In a short “review” of the book, I mentioned that reading this would reveal monsters scarier than anything made-up. Gary Tison, and his accomplice Randy Greenawalt, are terrifying.

James W. Clarke has written a book that should be read in the daylight while surrounded by others. Avoid reading at night, in the desert, alone. This true tale, despite the criminals being gone now, proves that truth is stranger than fiction and much more disturbing. Just as disturbing  perhaps as the made for TV film in 1983 starring Robert Mitchum and James Spader which purports to tell the story of Tison and his sons, Killer in the Family. A movie that one can be forgiven for missing considering the real facts of Tison and his bid for freedom.

Nelson Mandela; the name calls up images that some would like forgotten. Apartheid for one and years in prison for a lone man whose white-haired exit from his enforced incarceration caught the world’s attention, compassion and imagination. The most recent image that springs to mind is that of an obscene travesty. One that was started by the great man’s avaricious family who have now officially declared the beloved Madiba dead after months of maintaining the fiction of him still clinging to life.

The Walking Dead Midseason Finale: Tanks for the Memories

The journey in the first half of season four in The Walking Dead has been an almost languid experience. The midseason finale ended that laid back almost somnambulistic pace of the prior two Governor focussed episodes and ended with a bang, or two, as the creators gave a metaphorical “tanks for the memories” moment in the middle of the season.