There was a British television show in the 1980s which starred the delightful Richard Briers (who starred with Felicity Kendal in the 1970s comedy The Good Life), Penelope Wilton (who gained a whole new legion of fans when she portrayed Simon Pegg’s mother in Shaun of the Dead “Stop pointing that gun at my mum!”) and made Peter Egan into a household name. The whole premise of the show was that Briers’ character was a controlling busy body who kept a close lid on his neighbors in their close (See what I did there?).

Waking this morning after a busy day doing nothing but discovering the backroads and side roads in Quartzsite, Arizona, (Biking well over  some 20 odd miles in the process.) where I was popping into various shops and in each one the staff recognized me; one actually gave me several DVD vouchers and it occurred to me that my life, like the title of the English sitcom, was also moving in ever decreasing circles.

I have to say that I really don’t mind this “shrinking” of my social circles and lifestyle, although there are a couple of folks I miss terribly. I do miss the plethora of films that I watched each week and the discussions of same afterward. I do not miss the swimming pool that came with the rented home I was sequestered in.

I do not miss the Las Vegas traffic, it seems every idiot who ever earned a drivers license moved to Vegas to terrify the locals, nor do I miss the casinos themselves. I do not gamble. It is too confusing. In the old days, when I was a world younger and in between wives, the slot machines I played took quarters, or nickels and paid out in the same currency. None of this ticket rubbish and machines where you cashed your ticket and so on.

Thinking of Ever Decreasing circles and the wonderful actor Richard Briers; he passed away in 2013 but not before he’d worked in the 2012 horror comedy Cockneys vs Zombies playing an old age pensioner and did two more voice over jobs after. Penelope Wilton is working steadily since Shaun of the Dead; The Best Exotic Marigold Hotel and Downton Abbey to name but two projects. And Peter Egan is also busy, working on Downton Abbey as well as providing voice overs for a load of video games. The main cast of of Ever Decreasing Circles may be down one, but the two main survivors are doing very well.

In my world of ever decreasing circles,  life may have gotten more compact but other than occasional periods of  an annoying lack of focus and those silly moments of worrying about the state of my heath, I wake up each day with the hope that my flight from Vegas has left me wiser and, at the very least, a better writer than I was before my time with the GLV.

In terms of becoming more proficient in my writing skills, I do realize that the second paragraph ranks as one of the longest sentences in English history. This tendency to write overly long sentences is still a vice that, try as I might, continues to plague my work.

I will take the easy way out and blame it on writing in a crowded Burger King which is populated with an older crowd who apparently left their hearing aids at home. I am working on attaining that level of concentration that tunes out these overly loud patrons, until then, its earphones and iTunes to the rescue.

Earlier today I fed my craving for salad and stopped in Crazy Jerry’s (a place that serves some very tasty Chicken Fried Steak and a mean Chef’s Salad). While there another customer came in and the subject of WiFi in Quartzsite came up. It turns out that no one in this tiny town has decent Internet. Mainly, it seems, because there are no providers who care enough to circumvent the local telephone line providers.

Until some entrepreneurial individual comes in and sorts out the Internet situation in Quartzsite, I will have to work very hard at learning to cope in loud and crowded places that offer free WiFi. I leave you with this little nugget of wisdom, do not pay for the Internet on offer at the truck stops. In this town, at least, the quality is no better than that of any other place in town and for the price of a coffee the three fast food joints offer the exact  same service. 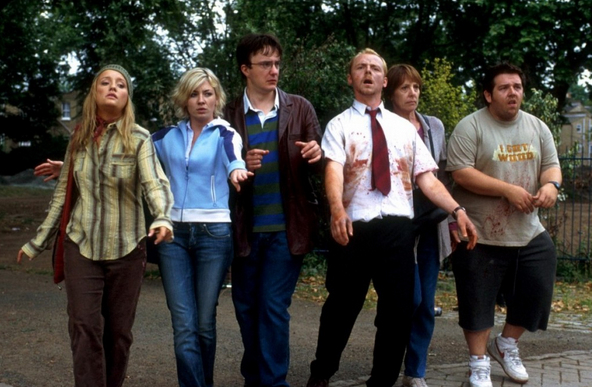 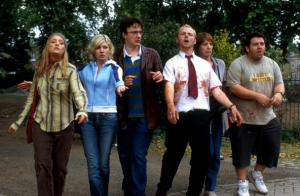 This 2004 very British Zombie film took the world by storm. Shaun of the Dead was even featured in Scream 4 as part of the film’s beginning – two characters were watching the movie on television while “ghost face” was busy murdering victim number three. Watching the movie on DVD and then listening to the commentary later with Simon Pegg and Edgar Wright, feels a little like England revisited.

Of course the first thing that anyone will notice while listening to the commentary by Pegg and Wright, is the cleverness of the script and all the ways the film ties into foreshadowing at the start of the movie by Ed. The other thing is how typically English the film and  the commentators are.

Watching the film back when it first came out on DVD, my daughter and I became instant life-long fans of Pegg, Wright, Nick Frost and the movie. It is so English in its depiction of just how your average Brit would react to a zombie apocalypse. So much so that you can smell the tea and scones whilst watching it.

This first offering in the “cornetto trilogy” set the tone for the remaining films. Each very English in nature and featuring the three men who have worked together since Spaced. Sadly of all the commentaries available on the DVD, the trio do not comment together.

But, for a real feel of England, listen to the the Pegg/Wright track and then the cast commentary. The former is quite amusing, “you love men,” however, with two stand up comedians in the mix, Irish comic Dylan Moran and Pegg the color provided by the actors is very, very funny and very, very British.

While both may confuse non-English fans with references that are as typically tea and scone-ish as Shaun of the Dead, for those who are more familiar with the vernacular and the humor, these commentaries are as enjoyable as the film.

Listening to all the actors doing their impression of the great Bill Nighy is among the many highlights of the running chat during the film. Doing their “luvey” discussions (comically) about why “acting is so tiring” and “don’t talk to me about emoting,” and the chuckles just don’t stop.

If you find that sort of thing funny.

I myself do and admittedly the thing I miss most about my home of almost 32 years is the humor. Perhaps the thing that kept me coming back to work everyday at HMP & YOI Warren Hill (the prison that was my workplace for 10 years) was the ability of my coworkers and colleagues to make me laugh on a very regular basis.

Maybe it is living with the abysmal English weather that makes the average Brit so able to see the funny or sarcastic side of everything. Don’t get me wrong, the British sense of humor can be rough, even sadistic.

When the shuttle exploded killing all 7 astronauts on board, a popular short joke that made the rounds was, “What do astronauts like to drink? Seven-up.”

That is the least offensive of the jokes that were passed around at the local.

British humor is, for the most part, easily accepted across the pond here in the US.  Although some English gags are so topical that no one apart from a resident of that country can understand them. American humor, for some reason, does not always go over well in the UK.

For me, Shaun of the Dead  is like England revisited. The theme, story and characters in the film are a snapshot of the country and just how your average man or woman on the street would handle a zombie apocalypse.  As the commentators are quick to point out, the film is, at its core, about “getting your life sorted” amidst a zombie invasion.

That in England the average denizen would carry on regardless despite the apocalypse around them. Regardless of plot and sub-plots the film is hysterically funny.  After having a good laugh at the movie, take the time to listen to the commentaries.

There are a total of four, the last two featuring, the brilliant Bill Nighy and Penelope Wilton who play Shaun’s stepfather Philip and Shaun’s mum,  and the very  last commentary is done by the zombies in the film.  Bill sets the tone of number three with wondering what other countries think of the word “bollocks.” Even if you do not normally watch the special features, make this DVD the exception. You will be glad you did.