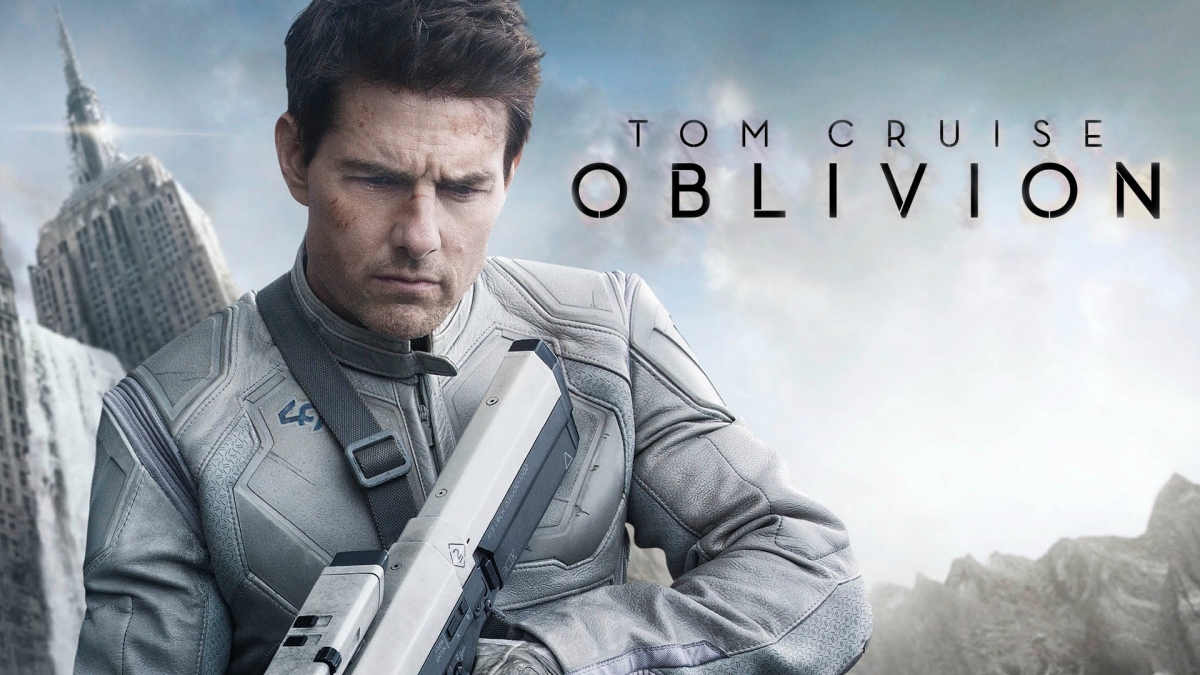 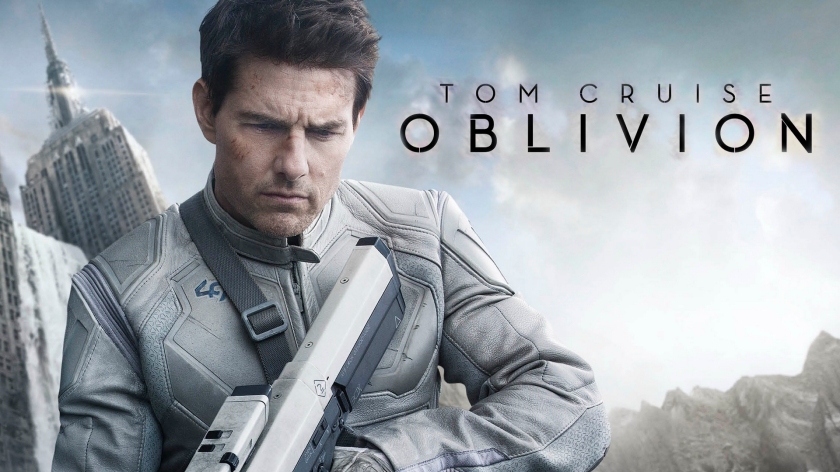 With my busy schedule lately, I’ve been going through “new film” withdrawal. Fortuitously Playstation Store had Oblivion as an early release for the price of £14.99 (about $23). Despite my reservations, my desperation to see any new film made me purchase the film. Result? Surprisingly good and worth the exorbitant price of purchase. *Does it annoy anyone else that Playstation “early releases” are only for sale and not for rent? Answers on a postcard please.”

The film is directed by Joseph Kosinski (who has a credit for co-wrting the screenplay along with Karl Gajdusek  and  Michael Arndt, he also directed Tron: Legacy). It stars Tom Cruise (insert prior film titles here), the gravitas actor himself Morgan Freeman, Olga Kurylenko (Quantum of Solace, Hitman),  Nikolaj Coster-Waldau  (Game of Thrones, The Hunters, and the one actor who should play agent Leon in any live action film of the Resident Evil game series) and  Andrea Riseborough  (Welcome to the Punch, Brighton Rock).

The plot revolves around a future earth that has been destroyed and decimated by an alien race. Jack Hawkins (Cruise) and his partner Victoria (Riseborough) have two weeks left on the now inhospitable planet as a team assigned to protect the energy producing fusion generators that power Titan where the human survivors who fled Earth are living.

Earth won the conflict with the aliens after the moon was destroyed by using nuclear warheads and survivors who didn’t migrate to Titan are scavenging the equipment that Jack must protect.

As Jack and Victoria near the end of their mission and the scavenger attacks increase, he sees an object fall from the sky and when he tracks it to the crash site, he discovers something that changes his perception of the world and his place in it.

I enjoyed the film. As I said, it is surprisingly good. I have never been a huge Tom Cruise fan despite the fact that he’s always turned in excellent performances. I think it has to do with his rather bizarre behaviour “off screen.” Cruise doesn’t disappoint in this film and I was amazed at his physical condition. Something has to be said for having the money to maintain biceps that large.

I fell in love with Julia (Kurylenko), but then I’ve had a “screen crush” on this actress ever since Hitman.

The film offers a brilliant cinematic experience and the characters all seem disturbingly real, despite the “Moon” device used and the somewhat “contrived” ending.  I found myself unable to stop watching the film and wound up  not taking any breaks. I was so caught up in the storyline that I didn’t want to pause it.

I will say that I did guess the plot twist fairly early on, but that was a combination of watching the trailer too many times and the fact that most sic-fi films all lean towards the same direction recently. In spite of the fact that I’d guessed the twist, I still enjoyed the film.

I have to give the film a 4.5 out of 5 stars. It loses half a star because I did guess the twist and its reliance on another film for another plot twist, so half a star off for lack of originality.  It is still a cracking good film and worth a watch.

So Oblivion was surprisingly good and I’m not upset that I had to buy the film versus just rent it. Although I do miss my special features and will most likely get a blue ray copy just for those. On my trip to South Africa (which I will keep posting about) I saw quite a few films that I need to review. The plane journey back was sleepless for the duration of the almost 11 hour flight, so I got to fit quite a few films in.  These will be cropping up from time to time in the form of reviews.

Directed by Peter Weir (The Cars that Ate Paris) and adapted for the screen by Cliff Green from the book written by Joan Lindsay. The film has the “unofficial” title of being Australia’s most loved film and it was a critic’s favourite when it opened in 1975. It has since risen to a cult favourite. The screenplay should be counted as one of the best adaptations of a book it is amazingly faithful although the ending was altered a bit.

The film got off to an inauspicious start when the actress cast as Mrs Appleyard fell ill at the last moment and Rachel Roberts agreed to step in and take over the role. Such tricks of fate can seldom be so advantageous. Roberts gave the role as the schools headmistress a sinister and cold air that was apparent in the book and that helped the adaptation seem all the more faithful.

The remainder of the cast was split into well-known Australian actors and most of the children were unknown. Helen Morse, Jacki Weaver, Tom Llewellyn-Jones, and Anne-Louise Lambert were all well-known to the Australian public with Morse and Weaver being somewhat better known than the rest. Weaver seems to have enjoyed a “Barbara Windsor” type of reputation and Morse had been extremely active in television.

The film, like the book, is set in the year 1900 on St Valentine’s Day. Appleyard’s College for girls, which is a boarding school for European wealthy off-spring (and the odd Australian rich girl) are going out for a picnic at the local geographical wonder, Hanging Rock. Only one girl is left behind; because of her stubborn refusal to learn a poem she has been punished.

Also like the book, the girls and their chaperones (the French teacher and Miss McCraw) as well as the drag driver Mr Hussey all arrive at the picnic spot. Unfortunately not all of them return. Three of the girls have gone missing as well as Miss McCraw. While we know that the girls have gone exploring the rock, we never really know what happened to Miss McCraw apart from the chubby Edith’s story of seeing the teacher in her pantaloons when she alone ran down the rock full of screams and hysteria.

The film then shows just how deeply this event has affected everyone and the resultant hysteria and shock of the Victorian inhabitants of this ancient and savage country.

Weir maintains an air of eeriness that pervades the entire film. This combined with the odd nature of Hanging Rock and the haunting (and sometimes very obtrusive) music builds a state a languorous tension that slowly builds throughout the film. The cinematography is misty and foggy, high lighting the ephemeral look of the film and the images of the missing girls, especially the otherworldly Miranda, and swans heighten the feelings of a mythical aura.

The overall feeling of the girls outing is one of impending doom. Weir’s use of slowing the frame rate as we follow the girls (and the other people at the site) movements during the picnic and later as they climb the rock on their journey into oblivion; he also uses the slower frame rate when dealing with other emotional or crucial scenes.

Like the book, the film shows the heat of the summer and the sounds. Cicada’s buzzing while heat waves shimmer over the napping girls; the rising dust from horses and the drag (carriage) and the heavy uncomfortable clothes that everyone wore in the oppressive heat. It also showed the misty appearance of Hanging Rock itself, viewed from the distance and looking like some eerie and dangerous monolith waiting for victims to come close enough for it to devour.

After finally reading Joan Lindsay’s brilliant book that the film had been made of, I searched for a copy of the film. Luckily there was a three disc Deluxe Edition for sale via Amazon and I snatched it up. It has the Director’s cut; the original theatrical cut (made from a negative as the original theatrical cut could not be found) and a disc devoted to the making of and other documentary films about the movie.

I have not seen the director’s cut yet, but I did watch the theatrical cut and watch most of the special features. These were priceless bits of interviews with the cast and crew; they also included an interview with the author Joan Lindsay. It was very interesting to find that not a lot of people were pleased with Peter Weir’s decision to re-cut the film years after it had been made.

I also noted on Amazon that a lot of folks did not like the “new” director’s cut either. I will watch it, just to see what slant Weir adds or takes away from the original. Either way, it is easy to see why this has been declared Australia’s favourite film. The film has aged well and my only complaint  was that the music was sometimes so loud that I could not easily hear the dialogue. This was actually solved by putting the subtitles on. I am sure that part of the problem lay with my laptops limited stereo capabilities though and not of the soundtrack.

Picnic at Hanging Rock is a classic film that should be right at the top of “films to see before you shuffle off this mortal coil.” If you haven’t seen it, do rush out and find it, stream it, rent it, and try to get hold of the special features. It is definitely worth the time it takes to see what went on “way back then.”