Ruth Rendell, creator of the popular Inspector Wexford Mysteries, has died aged 85 and England has lost another literary treasure just months after P D James, who brought poet and police commander Adam Dalgleish to life passed on. Both ladies of crime had strong Suffolk links and Rendell, who suffered a stroke in January 2015, adored her adopted home in the country county. Both authors created “detectives” who became popular on the small screen as well.

Read the rest of this article at Viral Global News…

Whichever name he used this prolific author produced books that were entertaining, fun, and full of characters that you bonded with. None more so than the detectives in the 87th. The stories are all in the fictional town of Isola that is a disguised “version” of Manhattan island in New York. His “cops from the city of Isola first made their appearance in the book Cop Hater.

From this first book (in 1958) McBain produced no less than 1 to 2 books a year about these hard-working policemen for a grand total of 54 stories in all. A good amount of the books were made into movies and they also spawned a television series that McBain wrote for as well.

You know that you’ve “made it” when your stories are referenced in books written by other people. McBain’s cops from the 87th have been mentioned in quite a few books by different authors. Even one of  Stephen King‘s characters talks of going home and catching up on the “boy’s” latest crime solving fest (The Stand re-release 1990).

The detectives, as well as his criminals in the books, were well-rounded individuals who had personality and depth. The cops had a nemesis in the “Deaf Man” a master criminal who enjoyed toying with the police, in particular Steve Carella. The cast of characters who made up the 87th were all memorable and all developed into favourites with the reading public.

All the detectives had personalities and foibles just like “real people” and each had a characteristic that summed up their actions. Meyer Meyer – the Jewish and bald detective whose father gave him the repetitive name as a joke; Cotton Hawes – a red-head who’d been stabbed in the head, leaving a white streak, whose father named him after Cotton Mather of the Salem Witch Trials; Bert Kling – the poster pretty boy who works his way up from the uniformed police force, Arthur Brown – the black detective of the overpowering size with a calm temperament, Hal Willis  – the short tough detective with poor taste in women; the list could go on, but I’m going to focus on the crowd pleasing Steve Carella.

Carella with his beautiful deaf/mute wife Teddy (in the days before political correctness it was okay to use those terms to describe someone who was both deaf and mute. Now I would need two or more sentences to describe Teddy). In what could be seen as the ultimate male chauvinistic choice of a partner, Carella marries Teddy who, even though she cannot speak, uses sign language and lip-reading to communicate.

Out of all the detectives Italian Steve Carella is the definite favourite. His tall and “slanty-eyed” cop is a real hit with the ladies and fans alike. Steve is easy to get along with and he likes all his fellow detectives with the exception of “new boy’ Richard Genero (who shot himself in the foot) and the bigoted ‘Fat’ Ollie Weeks from the 85th precinct although, as the old joke goes, Ollie likes and admires Carella.

I just finished reading two 87th Precinct books after a very long hiatus from the series. Killer’s Wedge and Long Time No See. As usual McBain’s titles reflect the story. Like his Matthew Hope books (a popular series about an “investigating” lawyer written under the name of  Evan Hunter) they have a relevance to the plot, although, the Hope books usually resemble some sort of pun or joke as in one title called Gladly the Cross-eyed Bear.

Killer’s Wedge features a “locked-room” mystery for Carella to solve and there’s a woman who is not a member of the Stephen Carella fan club. In fact this explosive lady can’t wait to meet him, but not to give him a key to the city.

Long Time No See has Carella and his partner Meyer trying to figure out why a madman is killing blind-people and “gassing” their seeing-eye dogs. This one is a real intricate piece of work that runs like a well made Swiss watch.

Both these stories feature Carella as the focus of attention, but as usual with an 87th precinct novel, all the other detectives get a turn or two. McBain’s series has been lauded by serving police officers since its inception. For stories that have spanned a 47 year time period, McBain has managed to make each one as “true” as possible in his depiction of how police really work.

His truth lies in the procedure and the rules that police have to follow. The footwork involved and the “intuition” that no-one relies on, but still listens to, added to the realistic characters that McBain paints in the books helped to make them a favourite among the real “cops.”

Sadly, Ed McBain died in 2005 of throat cancer. His books live on, however, and none more so than the 87th novels that feature Steve, Meyer, Cotton, Bert and all their co-workers and the criminals, victims, and innocent bystanders that populate the fictional town of Isola. I can highly recommend both the aforementioned books.

I can also recommend the entire 54 book series. I have read quite a few myself and I’m still discovering new ones I’ve missed. I found out about McBain and his brilliant books “through the backdoor” again. I read Stephen King’s 1981 book  Danse Macabre where he talks about horror as a genre. In the section about TV movies he wrote about Fuzz; the film was made as a comedy, but was based on Ed McBain’s book of the same title.

Curious, I hunted down the book and read it. I instantly became a fan for life. If you can, and it’s a whole lot easier these days with eBooks and the internet, hunt down this fantastically entertaining series about the denizens of the 87th. (Both of the aforementioned books are available for the Kindle.)

It could be considered a crime not to. 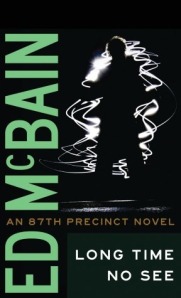 Like Loading...
When I was about eleven or twelve years old I had another series of books that I adored even more than the Brains Benton Mysteries. Alfred Hitchcock and the Three Investigators. Published by Random House, I was immediately gripped by the adventures of sturdy smart Jupiter, athletic Pete and everyman Bob.  I also loved that fact that their nemesis was a kid the same age as them, with the suitable nick name of Stinky.As soon as a new Three Investigators book came out, I took my hard earned money (I worked for my Dad and mowed a few lawns here and there) and ran down to the book store and bought it. The books never disappointed. As junior detectives these guys were even better than Brains Benton. They even had business cards with this on it: ??? – three question marks equals three investigators. I thought these guys were great.

Jupiter had the investigators headquarters in his Aunt and Uncle’s salvage yard. They had secret entrances  and the headquarters itself (if I remember correctly) was in an old mobile home. At the beginning of the series the boys  solved a mystery for Alfred Hitchcock and he repaid them by giving them access to a chauffeur driven Rolls Royce and became a confidant.  Hitch would always appear at the end of each book where the boys would explain how they had reached their conclusions. Hitch would also occasionally make a “cameo” in the book as well.

The end result of me loving these two book series, Brains Benton and the Three Investigators, was that I decided at the ripe old age of twelve that I wanted to become a writer. Preferably a mystery writer as these were my favourite books. Neither I or the world had yet discovered Stephen King yet.

I sat down and wrote my first ever “fan-boy” letter to the Random House Publishers. I asked if they could please tell the author of the Three Investigators books that I really enjoyed them. I also mentioned that the books had inspired me to start writing my own stories. I ended the letter by thanking them for their time and that I hoped one day they would publish my stories.

Quite a bit of time passed. about three months I think, when I got a letter in the post. My parents were a bit surprised that I had received a letter. I was not a huge letter writer and did not indulge in the pen pal program that the school so regularly insisted that the students partake in. My Mother said it was from Random House.

I can still remember how excited I was that they had written me back. The mists of time have shrouded who from Random House responded to my letter, but I can still remember that it had at least two paragraphs and a closing line or two. Firstly they thanked me for my letter. Then the writer explained to me about “house writers.” It seemed that the Three Investigators had been started by one writer and subsequent books in the series was written by different house writers for each one. They went on to say that they were pleased to hear that I wanted to become a writer. They also said that I should remember, when I was a bit older, to send them anything I wrote  and they would give the material serious consideration. I was amazed.

Amazed about house writers sure, but, the fact that they had taken the time and effort to write to a twelve year old boy really surprised me. But above everything else, the fact that they were encouraging me just left me in a daze.  I was so proud of that letter.

I know that if it hasn’t been lost or destroyed by the advent of time my parents still have that letter somewhere in storage. But even if it is lost, it doesn’t matter. I still have the splendid memory of opening and reading that letter. And because of that one little act of kindness and thoughtfulness I will always hold Random House in high esteem.

It would be nice to imagine that one day I might just get something published by them…If I ever write a book, that is.