This small budget feature uses a lot of local talent to tell its tale, except for the presence of Eric Roberts who plays a sinister, or at least rather nasty, character who shows up at a diner 23 minutes to sunrise. Roberts’ does nothing outside of his normal range, but damn it, what he does is good regardless of how big his role, or just what it entails. Julia Roberts’ sibling is infinitely watchable regardless of what his part is.

In this low/no budget feature film, Roberts’ mysterious man, whom I at first thought was Death, but who turns out to be much more, enters the graveyard shift of an all night diner. The establishment feels like a throwback to those eateries of the 1950s. Like the one featured in the film Diner and the waitress actually pours every customer a cup of coffee, whether they ask for one or not.

Roberts, who plays Daniel, points this out when she fills his empty cup while the waitress explains to his young lady friend that it is the late night menu, so only what is on the back of the list can be ordered.

This is a small ensemble piece that features a middle-aged couple (Bob Zany and Nia Peeples), a young couple (Tom Sandoval and Kristen Doute), Daniel and his lady friend, Hannah (played by Haley Busch) the cook (a vet who has issues), played by Dingani Beza, and a waitress (Jilanne Klaus). There are other characters who appear fleetingly, the waitress’s drunken bully of a husband, a simple minded man who dresses as a superhero and a couple of cops. Each of these other cast members appears, some like the wastrel husband, two or three times, and their presence helps to round out the film.

23 Minutes to Sunrise is about immortality, whether it is a gift or a curse, and how someone would react if offered this chance to “live forever.” In Eddie’s case, the Gulf War veteran turned cook initially refuses point blank, despite being shown that the young lady is not delusional.

The film has an old fashioned feel to it. Almost like a film version of the play about three friends who discover the fountain of youth. A sort of morality tale with a confusing end and yet, it is oddly watchable. The dialogue often misleads the viewer just enough to keep things interesting.

When Daniel comes in with his teenage friend, the two speak in such a way that it seems that the older man has groomed the young lady. The dialogue screams pedophile and victim. However, after listening to the couple for a bit longer, it turns out that she took him up on the offer of immortality, not underage sex.

She has the last 23 minutes of the night, before the sun rises, to convince someone in the room to take over the “gift” of living forever. The eternal 17 year old wants out, as she says earlier, she has no family, friends and no life. The character also has not learned a lot during her 250 years of being a teenager as she cannot convince any of the diner’s customers or staff to take the gift at first.

There are things in the movie that annoy. Apparently the budget was so small on the film that blanks and a working pistol could not be provided. The use of sound, light, and the actor jerking his hand while pulling the trigger did nothing to convince me that he had shot off the weapon.

This one “cheat” did not spoil the film but did let it down considerably. The overall rating of 23 Minutes to Sunrise on IMDb is pretty low with a figure of 4. The one review by a customer is scathing and insulting. The film is interesting and definitely does not deserve the severe pasting received. Perhaps not worth the $3.99 paid at the truck stop, but worth watching if it turns up on Netflix or YouTube.

Considering that 23 Minutes to Sunrise  was made with local actors, with the exception of Roberts and Nia Peeples, the overall feature is pretty impressive. Certainly interesting enough and no worse than many other low/no budget films on offer. Worthy of a look as the film does make the viewer think. 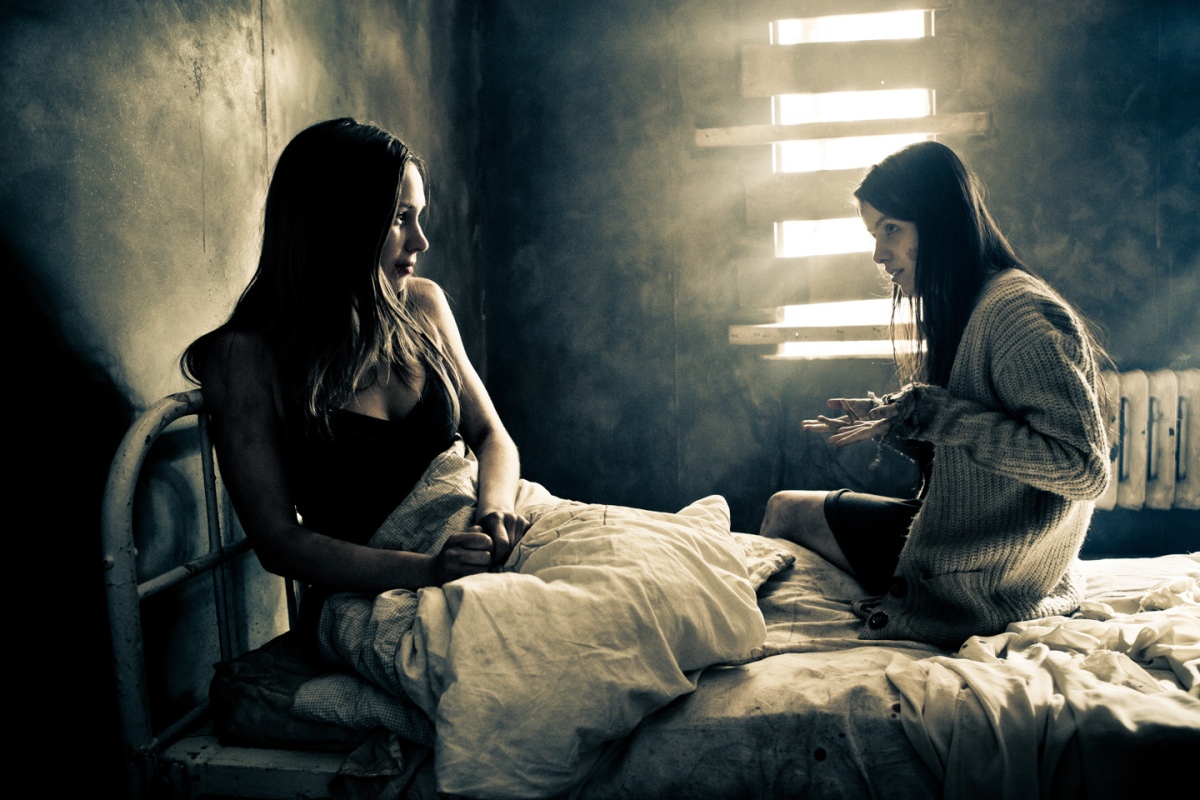 In the 2012 film, The Seasoning House, first time director Paul Hyett comes out of his corner swinging with this dramatic directorial debut. The film has been classed as horror, and in most viewers eye it is, but it is more of a tense drama, filled with enough suspense and unease to keep you uncomfortably on the edge of your seat for the duration of the film.

In war-torn Bosnia, a young deaf-mute girl with a strawberry birthmark on her face, sees her only parent brutally shot down by soldiers before she is kidnapped with other girls from her town. She winds up in a brothel run by Victor who, taking a shine to the young girl, keeps her for himself and teaches her how to “maintain” the other girls in the house.

Dubbed Angel by Victor, she goes through her daily routine of giving the unwilling prostitutes heroin and cleaning them up for the next client. When she isn’t with Victor or the girls, she roams the house via the attic and the spaces between the walls and ceiling. She meets a girl that can communicate with her through sign language and the two become friends.

Suddenly the soldiers who killed her mother and kidnapped her show up and everything takes a turn for the worse.

The film is pretty brutal. Thankfully the “rape” scenes are not too graphic and not too many. They are, nonetheless, uncomfortable viewing. All the more so because the film shows just how dehumanised the girls have been made under Victors tutelage. When Angel “snaps” and decides to attempt escape, the picture increases the already potent air of dread.

Rosie Day, who played Angel, was brilliant in the role of the birth marked deaf mute. She was utterly convincing in her isolation and when she “turns” you find yourself cheering her on in her efforts to keep from becoming another victim. Sean Pertwee as Goran, the leader of the soldiers, made a brilliant villain.  His character is the worst of the lot in a film filled with distasteful and horrible people. It was a surprise to see Pertwee as a villain, he usually plays doomed characters who die quite graphically in whatever film he is in.

Kevin Howarth played brother owner Victor, and he also did an excellent job as the torn pimp. His character had another level, which made him all the more interesting as well as confusing. The only down side to the film was Pertwee’s accent. I have seen him in other films where his dialect and accent were spot on when playing a non-English role. In The Seasoning House, however it did have a tendency to  “wander.”

The film was a pleasant surprise, as Hyett held nothing back for his first feature film. It was gripping stuff and there are some scenes near the end of the film that actually made me fell uncomfortable enough to almost stop watching for a moment. I have never been, “claustrophobically” inclined, but at several points my heart-rate increased and I had to “control” my breathing as I watched the action on screen.

This is a real “gut churning” experience that should not be missed. The Seasoning House is currently on UK Netflix and definitely a 4.5 out  of 5 star film. For a dramatic directorial debut, Peter Hyett, manages to hit a home run worthy of Babe Ruth.