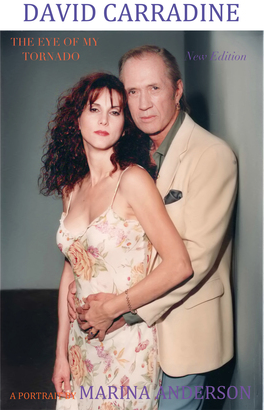 After spying this biographical tale in the second-hand section of the local thrift shop last year, I grabbed it on a whim. I was still in shock at Carradine’s death by “autoerotic asphyxiation” as determined by a coroner back when his body was discovered in a Bangkok, Thailand hotel closet in 2009.

The reason that his death stuck in my mind so firmly was two-fold. One, the news of his death came literally on the same day that SyFy’s “Celebrity Ghost Stories” had advertised a segment by Carradine where he talked of a haunting. I remember being stunned at the news and the timing of it. Secondly, his death was eerily similar to another actor’s whose dead body was discovered after the dead man’s fiancee raised concern for her missing fella. Albert Dekker, whose last role was that of the railroad man Harrigan, an agent for the company intent upon hunting down and killing the gang in “The Wild Bunch.”

Dekker had been found in ladies lingerie with obscenities scrawled on his near-naked body and hanging from the shower rail in his apartment. The death is recounted in the “underground classic” “Hollywood Babylon” by Kenneth Anger. The similarities are remarkable, especially as both women whom the men were attached to, were adamant that foul play was involved.

In this book, Marian Anderson writes, as a sort of catharsis, about her time with Carradine and the side less known. Her recounting of their affair shows just how much she did to rejuvenate his career and her work to get he and Tarantino together before “Kill Bill.”

That David Carradine was a very talented actor is undeniable. Watching him in “Night of the Templar” in what was, except for the 2016 film “Mata Hari” which is still in post production, his last role is an example of his effortless style of delivery in an otherwise poorly executed film.

Marina tells of David’s attempt to stay sober during their six year relationship and his going back to booze afterward, along with what appears to have been opiate abuse throughout, and one marvels at the amount of talent that still shone through in his performances.

Sadly, it seems that Carradine was not an overly pleasant man when dealing with his fans and he was at the forefront of autographs for money. Reading the book, which is very well written, Carradine comes across as romantic, controlling, narcissistic, passive-aggressive, and wildly talented. He was a musician, singer, and writer on top of his acting and Marina is not hesitant to point out the creative sides of her ex-husband.

There are things about David that are shocking, incest on top of the alcohol abuse, and his sexual practices sound like something out of “50 Shades of Grey.” Anderson does not flinch at showing all the sides of her relationship with Carradine, warts and all. Her cleansing act of revelation is entertaining and one leaves the book with a feeling that Carradine never realized what he had in his grasp.

Sadly, it seems to be a trait which he was doomed to repeat regardless of whatever partner he was with. After buying this book, written in 2010, it took me over a year to get past the first chapter. Not because it was “hard reading” but because of my business schedule. I picked the book up yesterday and once started, it was impossible to put down. Finishing this morning, I realized that this was one of the best celeb biographies I’d read in a long time.

Kudos to Marina Anderson for her portrait of David Carradine, “the eye of her tornado” and the times spent living with him and getting over him. She also tells of her own personal investigation into his suspicious death in Thailand and her conclusions. This is a 4 out of 5 star read, fascinating and difficult to put down.