After all that Mack and Addy have gone through together, Z Nation piled on the pressure for these two love birds in Sisters of Mercy. The pair follow Citizen Z’s instructions and after the redhead kills four zombies, doing a version of Cinderella, the couple stumble into Lt. Warren and the remainder of the Murphy group. Addy once again acts pretty strange when the reunited survivors stumble across “Chester” whose head Addy immediately pulverizes with her bat. Written, directed and edited by Ti West (Does this make anyone else think of Robert Rodriguez?) and starring Sara Paxton, Pat Healy and Kelly McGillis, The Innkeepers is a brilliantly entertaining ghost film.

There were some complaints from a few critics when the film was released about the slow pace. To those nay-sayers, I say, “Sit down in the back and shut up! If you were really paying attention and watching the film instead of trying to show how clever you are, it would have made sense.”

The film is about the Yankee Pedlar Inn (a real establishment in Connecticut where the film was actually filmed) and it’s last ever weekend. The place is closing down and two ‘skeletal’ staff have been left to work in reception for the odd guest who just might show up.

This is where the beauty of this film first appears. West has taken a lot of time and effort to allow us, the audience, to bond with the two erstwhile and likeable staff members who are running this last shift.

Sara Paxton plays Claire, an arrested in development ‘super-geek’ who desperately wants to experience a paranormal event. Big points have to go to Paxton. She is probably the only actress that I can think of who will let herself appear practically make-up free and is not afraid of letting herself ‘look’ like a ten year old boy in the arena of mannerisms and attitude. She sold this film and it’s story by giving a more than 100% performance and making her character so damned likeable that you really cared about what happened to her.

Pat Healy plays Claire’s partner-in-crime Luke. Luke is that sort of chap we’ve all worked with. He’s probably a bit too smart and obviously over qualified for his job. But his disinterest in finding any higher means of employment speaks volumes about his overall get up and go factor. Luke is another immensely likeable character.

By the time the film gets seriously into the ghostly happenings at the hotel, we have bonded with both Luke and Claire and we like them both. Both actors gave a real sense of partner-ship with their characters. You could tell that the two characters had worked together before and often and that they both liked each other’s company.

At the beginning of the film the only guest is a woman who has left her husband and has checked into the hotel with their son. Ex-actress Leanne Rease-Jones (Kelly McGillis) soon checks in and Claire is more than a little star-struck by the presence of her childhood hero being in the hotel.

Along the way, they lose the woman and her son (not through any sort of ghostly foul play, but mainly because of Claire’s ghost hunting techniques) and an old man checks in. The old man (George Riddle) is sad, full of melancholy and creepy as hell. He wants to stay on the third floor which has been stripped of its furnishings and only a few beds remain. Claire takes pity on the old boy and gets him some sheets so he can stay in the honeymoon suite that holds so many memories for him.

To say that I loved this film would be the understatement of the century. The characters, the plot, the hotel and the underlying comedic edge to the film elevated this to an ‘I must own this film’ category. I was already a fan of Paxton’s after seeing her in The Last House on the Left remake. Now I’m a lifetime fan-boy. She is an amazing actress and it will be fun to see just how far her star rises.

I enjoyed Pat Healy in 2001’s Ghost World, but I loved his performance in this film. He is another actor who has just shot to the forefront of my list of favourite actors.

Directer Ti West has shown that his vastly entertaining The House of the Devil was no fluke. He is another of those Hollywood protégées who will become the next Spielberg or even Rodriguez in the very near future.

Run, do not walk, to your closest film rental outlet and watch this film. It was so good that it defies the usual bag of popcorn rating system.

This is quite possibly the best post-apocalyptic film I have ever seen. Stake Land was co-written by Nick Damici (Mister in the film) and Jim Mickle (director) and it is brilliant piece of horror Americana.

Jim Mickle’s direction is practically flawless, he leaves no loose threads and at no time did the film meander. This was Mickle’s second feature length film and it is  for that reason alone that he shows so much promise. Nick Damici as another of the “Jobbing Actor” types that until now has never been given a decent enough role to show his talent. This man will leave a huge mark in the business. Connor Paolo (as Martin [and what a lovely touch, naming the lead actor after the ‘vampire’ in George A. Romero‘s cult classic]) Paolo has been working steadily since 2003 and it shows. He did a good job.

I was surprised and pleased to see Kelly McGillis as the Sister. She’s come a long way since Top Gun and she hasn’t lost anything in the acting department. Michael Cerveris played religious leader Jebidia.  He is another actor who has been working steadily in the business for years and it shows. An excellent actor by any standard and one who, if they ever do a biographical film about Yul Brenner, should definitely be cast as Brenner. Danielle Harris played the pregnant Belle. Danielle is known as the new “Scream Queen” and as powerful as her performance was, I did feel it was a shame she didn’t have more to do.

The  “Readers Digest” version of the plot is as follows:  Young Martin finds himself in a world gone mad and overrun with vampires. After his family is slaughtered by a vampire he is saved by Mister. Mister is a vampire hunter and his reputation is starting to precede him. Mister and Martin are heading for “New Eden” in Canada, the news is that New Eden is vampire free. On their journey north to New Eden, they pick up: A nun, a marine and young pregnant girl. After they pick-up the nun, they briefly lose her, but she is one tough Sister and makes her way back to the pair.

During  their journey, they not only kill every vampire they come across but they also have to fight off the religious zealots who have a tendency to kill, rape and otherwise mistreat other survivors that have the misfortune to cross their path. While all this is going on, Mister is teaching Martin how to become a hunter like himself. The land they are travelling through is bleak and practically deserted. They do come across the odd “town” where survivors have banded together, but these towns are open targets for the vampires and for the zealots.

At one town they come across the pregnant Belle who hitches a ride as she wants her baby born in New Eden. The foursome then head out and they come across a marine who has been left out as a sacrifice to vampires by the zealots.   I will  stop here with the plot synopsis as I don’t want to have any spoilers in the review.

This film was a great mix of  gore, scares, sadness, humour and pathos. The inclusion of the religious “cult” survivors and their rabid pursuit of God’s work was an excellent counter-balance to the stoic, taciturn hunter Mister. The cinematography was sharp and beautifully dark. The only problem I had with the film was the narration by Paolo. He spoke in a deeper more gravelly tone, to show that he was older than in the film. This worked well except for the music. The soundtrack was intrusive during the narration and I had a bit of a problem actually making out what Martin was saying. This is probably a personal problem as I do suffer from Tinnitus.

The casting for Stake Land was spot on. The people that the protagonists meet and interact with, looked like real people. The biggest ‘name” in the film was Kelly McGillis and she looks nothing like she did in her Top Gun days. Because they cast so well, the film, at times, almost felt like a documentary it added that touch of realism.

The vampires were excellent. Mickle and Damici chose to use the ‘old fashion’ type vampires for their film and it was a welcome change.  No one sparkled or wandered around in the sun. These vampires, for the most part, were mindless, savage drinking machines. They were not witty nor were they overly articulate. They were scary.

If you only watch one post-apocalyptic film this year, try to make it Stake Land.  It’s a film that’s got bite. 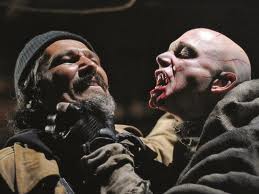