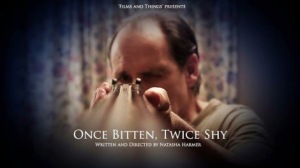 I am sure that I’ve been this tired and achy before in my life, it’s just been so long ago that I’ve obviously forgotten! I’m also that curious blend of satisfied and yet  really wanting to do it all again;  that part of me that will never be satisfied with a performance I’ve given. sure that if I do it just one more time, I’ll eventually get it right.

I found out yesterday that acting is like riding a bike. You never forget how (not totally at any rate) and while you may be rusty as hell and have trouble remembering your “good” side (Or if you’ve even still got one!) you can still hit the “mark” and act like the professional you once, briefly, were.

If I had a bucket list, and I do have to say I  have a very “half-assed” one, four young ladies who stepped out to do their first professional short film, just helped me to cross two items off my list.

After I stopped acting all those years ago, I’d always wanted to get back into it. Like everything else you plan, or want, you just never have the time, or worse, you’ve gotten too timid with the lack of practise in a craft that requires constant practise to be good at it that you know deep in your heart of hearts, it will never happen. But that doesn’t stop the wanting. That would be one item on the list crossed out.

The other item was getting to play a large role in a film. That has always been at the top of my  half-arsed bucket list. For that special privilege, I can only thank Tash Harmer. In my eyes, she took one hell of a gamble. Hopefully one that paid off. She certainly seems happy with my performance (made all the better by the quality of the actors I was privileged to work with) and despite my thoughts of, “If I could just do it again, it would be that little bit better.” I think we were both pleased with the outcome.

The third would have to be, being on a film set again. It was not a huge one, nor was it filled with grizzled old workmen who’ve plied their trade for years and seen and worked with some of the “greats.” No, it was filled with four very talented young ladies who I believe will go on to do well in their, thus far, chosen profession. They had vision, creativity, enthusiasm, concentration; apparent skill; worked well as a team, and they were damned fun to work with.

And I fell a little bit in love with each and every one of them.

And not in an, “”Eeewwwww” way either, thank you very much.

I’ve got a feeling that I will be able to write at least two or three blogs about the day of the filming, if I try very hard, but I don’t want to waffle on. I do want to thank, formally, the great team I worked with yesterday and let them know how much I think of all of them.

Steve Speak, is a brilliant actor. I believe this handsome young man will go very far, I look forward to the day that I can say, “I’ve worked with him!” Sanna Kelly, was also in the realm of wonderful. I have to say that for two such accomplished professionals, they made the old “out of practise” actor feel right at home.

Meera Daji, delighted and enchanted me. I would kill to get to work with her (with any of the crew) again. I’ve only seen tiny snippets of the “work in progress” and not the finished edited project, but I know that Meera made this grizzled old fella look good!

Fiona Lockwood, another delightfully enchanting young lady who welded a pretty mean boom mic and was entirely unflappable, good-humoured and another young lady that I’d love to work with again!

Katie-Marie Holbrookboosh Penniman Jr., what can I say, your enthusiasm and excitement in the project was infectious and I’ll tell you a secret, if I could have, I’ve had adopted you there and then. You done, “Well good, mate!”

Natasha “Tash” Harmer, had everything in her head and only had to consult her storyboards once or maybe twice. Kept track of every detail and was the best director that I’ve worked with in ages. She let the actors get on with it, which helped me no end. She is another young woman, along with the other four, who I’d work with in a “skinny minute.”

I also have to mention her boyfriend Scott Connett. Scott is a brilliant chap, also one of the all round nicest fella’s I’ve ever had the pleasure of meeting. In my list of mentions, I need to include Meera’s lovely parents, who chauffeured the majority of the film crew to the location from miles away and sat patiently for the extremely boring bit of film making.

Meera’s mum, who I’m ashamed to admit that I’ve forgotten her name, cooked a feast worthy of royalty for the cast and crew and it was eaten and enjoyed by all. (Folks who know me, will tell you that if I didn’t have proof of my own name in the form of a driver’s license, I’d forget my own moniker.)

I’ve just realised that I’ve waffled on for almost a thousand words, so I’ll stop now and thank everyone who worked on the film yesterday for making it a day to: remember, enjoy, savour, and if I could; do  all over again. 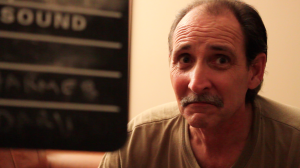