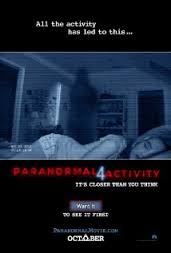 After watching this fourth trip to the Paranormal “well” several metaphors sprang immediately to mind. The first one became part of the title; Flogging a dead horse, the second was hinted at in my first sentence; going to the well once too often and the third was, appropriately enough, trying to get milk when the cow’s run dry.

I am sure that I could think of more “sayings” to describe my feelings about this film; I know I had 97 minutes to come up with as many as my little brain could conceive. Since this fourth bite of the Paranormal Activity apple (see there’s another one) was poorly conceived and perhaps the most boring of all the PA’s to date.

Just in case you’re interested, and I realise that you probably aren’t but bear with me here, the film was directed by the team of  Henry Joost and Ariel Schulman which actually amazes me. This is the same team that brought us the incredible and exemplary 2010 documentary film Catfish and the “miles-better-than-this-rubbish” 2011 Paranormal Activity 3. It completely boggles the brain that two such capable film directors would willingly put their names on such dross.

Now don’t get me wrong. I like the Paranormal franchise. I enjoyed the first ultra low-budget film and did not mind the second one with its slightly larger budget. And since the third one took the story in a different direction, I quite enjoyed that one as well. I did think, however, that they should have stopped at 3.

The film starts with a short “home video” of Aunt Katie (the crazy one from the first film) bringing a present to nephew Hunter. The location is Carlsbad, CA and the setting of the second film – sis’ house. The screen then goes dark and proceeds to tell us that Hunter was kidnapped.

We are then treated to a replay of the end of the second film. Okay! With me so far? Now at the beginning of the film no mention, however oblique, is made of the third in the series. It will be referred to later but in a very off-handed fashion and you have to be looking for it. I was bored so I noticed it.

After being treated to a “soccer” game with a group of young boys, one of whom is not playing but standing at one end of the pitch with what appear to be giant worry beads around his neck, we meet our main protagonist’s for this part of the saga.

Wyatt (Aiden Lovekamp), older sister Alex (Kathryn Newton), Mum Holly  (Alexondra Lee ), Dad Doug (Stephen Dunham ) and a little later boyfriend Ben ( Matt Shively ). This is the family that will be drug into the paranormal verse. We also meet their next-door neighbours son Robbie (Brady Allen ) who gets taken in when his mother gets sent to the “hospital.”

It will come as no surprise that Robbie’s “mother” is Katie (Katie Featherston ) from the first film.

The plot device in this version of Paranormal Activity is the use of mobile (cell) phone cameras and webcams (or Skype or iChat) to record the events as they “oh so slowly” unfold. Despite the use of sound (they utilise the “rumbling” sound to the maximum extent possible) the pace and the tension are just not there.

In this film they included the ability of the “demon” to manifest in daylight and someone came up with the bright idea of using the Xbox Kinect “night-vision” setting to “see” the demon or deity or whatever it is in the dark. I got quite annoyed. My Kinect doesn’t have that setting and if it does, I’ve never seen it mentioned anywhere. So you have to ask yourself the question. Does Kinect really have that capability or is this a phoney baloney device set up by the film’s producer’s and director’s?

Certainly not me, I felt incredibly let down by this film. It did not look like the rest, even with the re-appearance of Katie from the first film. The family was too attractive. They did not have the same “real” look as the other casts for the other films. Alex and her family looked like any casting director’s idea of an upper-middle class American as apple-pie family. Although I could be wrong about their salary tier. I’m not sure how many houses in America have a computer to tell them that: “The garage door is opening.”

On a side note, I noticed that Jennifer Hale, the voice actress for the female Commander Shepard in the Mass Effect verse was credited as doing some voice-over work in the film, I wonder if she was the computerised voice that announced the doors opening and closing. If she was, how cool is that!

Okay, geeky fanboy rant over, I’ll try to sum up my lukewarm feelings about the film.

I’d have to give it a 2 stars out of 5 and it only gets that much because I did jump once during the film. I am glad that I did not see this at the cinema as I would have thrown my popcorn at the screen and demanded my money back. Okay, I am exaggerating a little bit here, I wouldn’t ask for my money back.

Avoid this fiasco of a film and if it comes on regular telly…change the channel.