Written, directed, and starring, Jon Favreau, Chef is the 2014 film that could and did make the world fall in love with the food and the man who brought this small budget independent film to life. Proving that a film with no violence, sex or explosive action could be a hit, the Iron Man, and Cowboys and Aliens director showed that a film about a “cook” was profitable and enjoyable.

The film follows Casper’s journey to rediscover his self respect, his relationship with his son and his ex-wife. The movie could be called a combination of travelogue and social media training film. Part of the film’s plot deals heavily with Twitter, and a little with Facebook, Vine and YouTube. The brilliant young actor Emjay Anthony’s character, Percy who is Casper’s son, is a wizard on the sites and uses his social media know-how to help his dad get business.

After a few hiccups, Percy and Casper clean up a junked out food truck, financed by Inez’s ex-husband Marvin (Downey Jr.) and Carl’s old Sous Chef Martin (Leguizamo) from Riva’s joins him. The three get the van up and running and they travel back to Los Angeles from Miami and stop at several landmark cities along the way.

It is virtually impossible to watch this film and not feel the compulsion to drool at the screen while Casper, Martin and Percy cook up Cubanos sandwiches.  Favreau hired food truck chef Roy Choi to provide technical guidance and consultant. At the end of the credits Choi is seen showing Favreau how to make the perfect grilled cheese sandwich.

The film works so well, in the food department, that it almost seems like a documentary instead of a movie. (There is one moment where Favreau’s character calls and talks to an agent who wants him to do reality TV, and appear on Hell’s Kitchen, “Like Honey Boo Boo?” says a horrified Casper.)

While watching the movie could well result in the viewer helplessly craving Cuban food, or beignets, not to mention stifling the urge to get up and dance to that addictive music, it is the acting that sells this film. From Favreau to the tiny cameos from Hoffman and Robert Downey Jr. (Kudos to the  Iron Man star for reminding us of those days when he played douche bags so brilliantly, in case fans have forgotten check out Weird Science, his high school character was such a jerk. Of course it could be argued that as Tony Stark, his character’s have changed very little…)

Chef may not be 2014’s answer to the 1981 film On Golden Pond, another non-violent, no sex film that entertained brilliantly but it hits the spot. Favreau pulls off the cooking in the film and his costars all perform admirably. Kudos to Hoffman as the snotty restauranteur and Oliver Platt as the food critic is just brilliant.

The biggest surprise is the youngster who plays Casper’s son Percy. Emjay Anthony sells it 100 percent and makes the boy believable. When Percy interacts with Carl it feels natural and true, they help to bind the ingredients of the film in a real and lovely way.

A quick word about the film’s score.

With no car chases, no gratuitous violence and no nudity, there could be many who would give Chef a pass, but the box office returns proves that many were ready for a film about food and family. This is a real 6 out of 5 stars, the math may not add up, but honestly this is a brilliant feel-good film not to be missed. Streaming on US Netflix right now, put on your bib and feel free to drool at the food while enjoying the scenery and the performances.

With the release tomorrow of The Wolf of Wall Street on DVD and Blue-ray it seemed a good idea to revisit this Martin Scorsese and Leonardo DiCaprio stock market Goodfellas. The original Goodfellas, which was also based on a true story, was about wise-guy Henry Hill who could not be a “made man” with the mafia because of the non-Italian blood in his veins. Hill turned informant when he was caught by the same law enforcement agency – the FBI – that took down Jordan Belfort, aka the “wolf” of wall street. 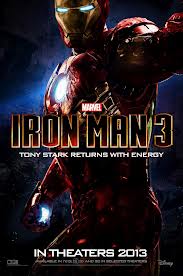 I was supposed to go see Oblivion today. My daughter Meg insisted that it would be money well spent because Tom Cruise shines in the film. But when facing the fact that Iron Man 3 was showing as well, it was no contest. That and the fact that Max (Meg’s significant other) was super excited about the film weighted the balance towards Team Downey and Paltrow.

I have seen all the Iron Man films and loved each and every one. But, third time lucky on a sequel that’s actually better than its two predecessors. That’s not to denigrate what director Jon Favreau accomplished with the first two films, but Shane Black‘s production was action packed mayhem that left you gasping.

Iron Man 3 sees Pepper Potts (Paltrow) and Tony Stark (Downey)  as a pretty solid couple. We have Stark narrating a sequence of events that start back in 1999 at Bern, Switzerland. Stark is attending a New Years Eve celebration and he “blows off” scientist super-geek Alldrich Killian (Guy Pearce) and this “inconsiderate” action comes back to haunt Stark later on.

*On a side note here; is there anything that Guy Pearce isn’t in? The boy from Ely, Suffolk, England seems to be in everything recently.*

Super villain Mandarin (Ben Kingsley in a role so far removed from his award-winning Ghandi it’s not even funny) is terrorising the world and worse than that, he’s controlling the television stations as well. When Mandarin harms Happy Hogan (Favreau) Tony takes it personally and not only does he taunt Mandarin on the “live” news, but tells him his address.

Proving to be too much of a temptation, Mandarin attacks Stark’s home and blows it into the sea.

Don Cheadle is  back as Colonel James Rhodes aka War Machine aka Patriot Man. Rebecca Hall plays ex-girlfriend (one night stand) Maya Henson who, like Aldrich Killian, shows up to “haunt” Stark in the present.

This film was a real run-a-way express train of a film. It featured more action and explosions than the first two films in the series. It featured a villain that seems indestructible, as well as his minions, and had some brilliant bits of humour as well.

For the first time in ages, I actually heard an English audience laughing out loud! I was so shocked, I almost dropped my popcorn.

With a run time of 130 minutes (2 hours and 10 minutes) the film moves so quickly that it doesn’t  feel that long. Iron Man 3 has it all; pacing, action, great performances, brilliant plot and great story.

My only complaint came at the end of the film when it almost seemed like Shane Black looked at his watch and went, “Shit! Is that the time? We’d better wrap this thing up. Now!” The details of the ending will have to be “un-revealed” (no spoilers from me friends and neighbours) but suffice to say, it had a rushed feel to it.

So while I sit here drooling for the new “Avengers” releases that are upcoming, I’ll re-live the film I saw today and rate it at a 5 our of 5 stars for delivering an Iron Man that allowed Downey to rock it like never before and Paltrow to pop her part (sounds rude doesn’t it?) up into the stratosphere.

Don’t wait for the DVD or VoD, watch it now! This is a big screen experience you don’t want to miss!