Apart from the running themes of “phone sales is a soul sucking job” and that the corporate ladder is full of bloodsucking bastards, this indie horror/comedy feels very much like “The Office” (The American version.)  on LSD and amphetamines. It is amusingly awkward and funny but, oddly,  dated.

Starring Fran Kranz, Joey Kern, Joel Murray and Emma Fitzpatrick (as the love interest) Bloodsucking Bastards was directed by Brian James O’Connell – his third time up in the chair . It was  written by Ryan Mitts and the comedy “conglomerate” Dr. God.  It follows Evan Sanders (Kranz) as he experiences the two worst work days ever.

Evan breaks up with Amanda (Fitzpatrick) and is passed over for promotion by his fickle boss Ted (Murray).  As acting sales manager none of his team are actually doing much in the way of sales.  New manager Max (Pedro Pascal) is brought in to rejuvenate the company’s profits and its employees.

From the moment Max arrives things start happening, co-workers disappear, or change completely. Some  have  their work ethic improved dramatically.  Evan appears to be the only one who notices these changes until slacker Tim (Kern) and  security guard Frank (Marshall Givens) realize something is amiss.

The comedy is a bit hit or miss but overall the inter-office politics and interactions are pretty much spot on.  The  “slacker” ratio is fairly high and the manager is definitely not a “people” person. In other words pretty much like “The Office” (either version).

Max, as the new “invigorating” sales manager is obsequious and as phony as a three dollar bill.  It also turns out that Evan’s fears are not unfounded. Something is actually going on at the business and his co-workers have become something else.

There are some funny lines.  For example, Kranz’s character gets incredibly frustrated at one point and yells out “F**k, f**k, f**kity, f**k.”  It is funny in a South Park sort of way although the phrase is the height of  urban displeasure vocalized.

Sidenote: Matthew Lillard has a “blink and you’ll miss it” cameo towards the end of the film.

Bloodsucking Bastards is a modern vampire tale mixed with the soul destroying job of phone sales, or cold calling as it is known in England.  Kranz is a sort of “Everyman” character who shoots to a sort of inept greatness when he discovers what is really going on.

As a comedy the film is not overtly amusing. The humor is more chuckle-worthy than “laugh-out-loud” funny.  The cast all work well together although each character is two dimensional. This has the effect of thwarting the “real factor”  which damages  “The Office” premise.

It is put together well by director O’Connell. The FX fit and the exploding body bit works well as a sly dig at the more “common” results of staking a vampire.  Buckets of screen blood  are splashed over the protagonists. While there  is an impressive amount of the red stuff, it is not too overwhelming.

The script  for Bloodsucking Bastards does meander a tad.  The film takes its time morphing into its horror theme. When it does finally make the transition it continues its corporate dogsbody theme.

This is a 3.5 star film, earning a full star for Joel Murray and Fran Kranz alone, and well worth watching at least once.  Bloodsucking Bastards is streaming on Showtime at the moment. 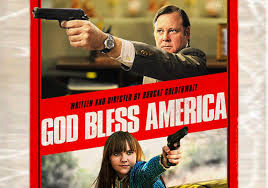 Every once in a while you find a film that makes you ask the question, “Where have you been all my life?”

Written and directed by Bobcat Goldthwait (World’s Greatest Dad) God Bless America is a hard hitting black comedic look at all the things that make America unpleasant. It is the  movie I have been waiting for and didn’t know it.

The two main characters are Joel Murray‘s Frank and Tara Lynne Barr‘s Roxy. Frank is a divorced man living in an apartment with paper thin walls. He fantasizes about killing his obnoxious neighbours and their constantly screaming baby. At start of the film he is fired from his job for ‘sexually harassing’ the office receptionist (he didn’t) and discovers that he has an inoperable brain tumour which will eventually kill him. His ex-wife lives with their overly spoiled and unpleasant daughter and her police officer fiance.

Frank decides after yet another night of television channel hopping  that the tv reality programs and the country’s news people are made up of profiteering and mean people. Believing that his tumour will kill him anyway he decides to shoot himself. While he has the pistol barrel in his mouth he watches part of an episode of My Super Sweet Sixteenth Birthday.

The birthday girl is spoiled, selfish and self centered. She screams at both her parents that what they are doing for her birthday isn’t good enough. Frank takes the gun out of his mouth, leaves his apartment and steals his neighbor’s car.He drives to the birthday girl’s school to kill her instead of himself.

Easily the funniest sequence in the film is where he meets Roxy and then goes down to kill birthday girl Chloe (Maddie Hasson). He handcuffs her to her birthday car’s steering wheel after she tells him, “You can have the car it’s the wrong one!” Frank replies, “I know.” He then places a rag in the gas tank opening and sets it on fire.

The placing of the rag, setting it alight and the slow-motion walk away from the car is accompanied by a very cool soundtrack. Unfortunately, before Frank gets too far away the  rag falls out of the gas tank and gets blown away from the car. Frank rushes to put the burning rag back. A group of Chloe’s ‘friends’ come up and Frank decides to shoot her instead.

Getting back into his neighbor’s car he flees the crime scene. Roxy is wildly impressed by his actions and tracks Frank down to ask if she can accompany him on his killing spree.

This unlikely pair spend the rest of the film bonding and killing annoying and mean spirited people.

Despite this being the blackest of comedies, the film walks a fine line between satire and drama. Joel Murray’s acting should have garnered him a bucket load of awards. His performance in the film showed every step his character took in his arc. By the time the film reaches it inevitable climax, Murray is so convincing it raised the hairs on my arms as I watched him.

Barr’s Roxy was a brilliant blend of teen angst, raging hormones and tunnel vision. She could, in my mind at least, give Ellen Page a run for her money as the new Hollywood ingenue.

The film itself was a perfect blend of ‘fly-on-the-wall’ documentary style filming with no musical ambience at all to all out musical set pieces which fit the scene so well that it was like listening to the sound equivalent of a tight fitting glove.

This independent film was a joy to watch from the very first frame of film to the last. It managed to make me a lifetime fan of Joel Murray and an ardent admirer of Tara Lynne Barr. Murray I would cheerfully cast in everything and Barr has fallen into the category of ‘keep your eyes on this one, she’s going places.’

God Bless America does not hit one sour note. It is paced well, edited perfectly and ends as it logically should. I could write reams more about this movie, but I would soon enter into spoiler territory. I’ll have to finish here and state quite simply that if you haven’t already seen this movie, you need to.

I will be purchasing this film to see if they have any ‘making of featurettes and/or director/cast interviews. This one is definitely a ‘keeper.’ 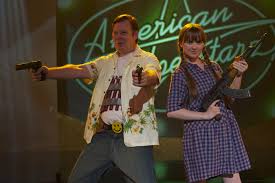