The Originals season two premiere began with Rebekah telling baby Hope a fairy tale version of the Mikaelson family, specifically about Elijah and Klaus along with mother Hayley. The story ends with Klaus plotting to get back all the wolf stones that inflict so much damage on the hybrid that he cannot drive the werewolves from New Orleans. After the tale ends, Elijah goes out to preserve buildings in the quarter and he discovers the last of the stone rings that needs to be captured.

The Walking Dead: Us Ends With Terminus Looking Deadly

Last night’s episode of The Walking Dead finally allowed viewers a glimpse of the sanctuary of Terminus and in Us this end of the line destination looks deadly. Whether it’s the deserted look of the place, where the paint looks barely dry and the whole compound seems eerily like the Marie Celeste, or the solitary woman who greets the group. Granted there is this lone female who is there to welcome the first of the survivors to enter, but her calm acceptance of these potential new members to Terminus feels about a ersatz as powdered eggs.

The Walking Dead: There Is No You in Us

Episode 15 of The Walking Dead, the penultimate episode of season four, seems to be pointing out that there is no you in us or, for that matter, in Terminus. As was pointed out back in Inmates, all roads do, apparently, lead to Terminus. Is this a good thing? Probably not as it looks like Joe may be right in his assertion that Terminus is a lie. Not just for him and his little group of killers either. 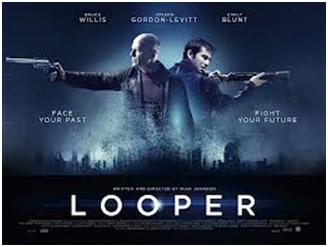 Joe (Gordon-Levitt) is a looper. Loopers, it appears, came into being right after time travel is invented in 2074. Immediately banned and made illegal by the government; the new time travel is used by huge criminal organizations as a sort of “Murder’s Inc” where “hits” are sanctioned and sent back to the past to be carried out by a looper.

So in the future hitmen become loopers and in the sense that some things never change, time travel is a criminal’s wet dream; presumably allowing more than just murder to fly the “airways.” When the target arrives in the past, he lands on a tarpaulin; hands tied behind his back and his head covered in a cloth bag.

The second he appears, the looper shoots him and rolls the body over to collect his “Judas” fee of silver bars. In an ironic twist, the loopers work for criminals from the future in the past. If you try to figure it out, you’ll just give yourself a headache. So don’t try, even Old Joe (Willis) says it’s beyond explanation (unless you use straws and salt).

In this world of murderous loopers one way to retire is when your future bosses send your future self back to be “whacked” this constitutes “closing the loop.” You get a literal golden handshake and you retire. Joe systematically does his job, learns French and relies on drugs to relieve the monotony of his existence.

When one of Joe’s fellow loopers, Seth (Dano) meets his future self, he is so shaken that he lets him escape. Seth comes to Joe for help and begs for a place to hide. Their boss Abe (Daniels) has already sent Kid Blue (Segan) to Joe’s apartment and they take Joe to see Abe. Joe then gives Seth up to Abe and gets to spend an hour with his favourite prostitute to ease his conscience.

Life goes back to “normal” which means Joe continues to kill his target at 11:30 in the morning and then go for coffee later. One day, the target is late. When it does arrive, he has no bag over his head and his hands are free. Joe is stunned and in the split second it takes him to fire his blunderbuss, his target (his future self) turns and the shot goes into the gold bars on his back.

As Joe pumps another round into the gun, Old Joe hits him with a gold bar; knocks him out and escapes. Joe awakens a bit later with a note telling him to run and catch a train out of town.

Now here is the only spot in the film that confused me. Joe (Gordon-Levitt) returns to his apartment and in the ensuing scuffle, he falls off a fire escape and knocks himself out. We are then treated to a longish montage of Joe actually shooting “Old Joe” and then “living” his life until he marries a Chinese woman and, as Old Joe, gets taken from his house and put into the time machine for his younger self to shoot him.

I was a little confused to say the least. But it did not matter. Any film that deals with time travel is going to be confusing. There are going to be plot holes and mistakes and bits in the film where you can hear the audible sound of everyone’s chin thudding on the ground. But as Bruce Willis’s character says, “It’s doesn’t matter.”

Purists are now pulling their hair and screaming, “Yes, it does matter damn it. What about the space time continuum, blah, blah, blah…”

I say again it does not matter; especially in the verse of this film.

Years ago the late Ray Bradbury wrote some excellent science fiction novels. The Martian Chronicles was just one example of his work; immensely popular it was made into a film (once or twice) and a television mini-series. The point about Bradbury’s work is this: when Ray told you that some astronauts took a rocket ship to Mars, that is all he told you. There was no song and dance about what powered the rocket or its payload or its dimensions. It was not pertinent to the story.

Now if you wanted science fiction that was all about the “science” you read Issac Asimov or one of his peers who would gladly give you all the science you might require from your Sy Fy story. The books by either author were equally entertaining but, both were written from a different point of view.

I always leaned more toward Bradbury’s stuff, because I like a good story and I don’t need to know how many booster rockets are needed to get out of the earth’s atmosphere. I feel the same way here about Looper. It’s story about time travel, I don’t need a lot of dithering about with someone trying to explain every little nut and bolt about it. It just is; and I’m fine with that.

The film was vastly entertaining. Even though I did have some problem with Emily Blunt being in yet another movie (I mean, come on guys, is she the only actress available at the moment or what) and as much as I adore Bruce Willis, he also seems to be in a lot this year.

Of course this is the third time that the team of Johnson and Gordon-Levitt have worked together. They are starting to look a bit like the Burton/Depp combination; let’s hope that they don’t wind up as stale.

But I have got to say that although I was a bit “freaked out” by the prosthetics used on Gordon-Levitt’s face to make him resemble a young Willis, I was impressed by the fact that Joseph has Bruce’s speech pattern and phrasing down perfectly. I really believed that he could be a younger version of Willis. Very, very impressive to say the least.

The film moves at break neck speed and shows a future that is bleak and violent and (like The Divide’s setting) dirty and hopeless. Joe’s existence before he meets Old Joe is a series of events that all run together fuelled by drugs and emptiness. Despite this depressing background, the movie manages to look like what we imagine the world to look like in 21 years.

I do have to say that I’m impressed that Rian managed to get a “hover cycle” into the film.

My final verdict is that this was a cracking film and I thoroughly enjoyed it. I’ll say it’s definitely a 5 star film worth watching and that I’m sorry I missed this at the cinema.