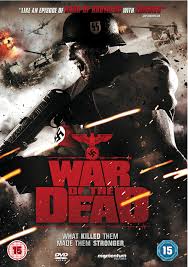 This American, Italian, and Lithuanian film almost didn’t make it to the public. Made in 2007, edited in 2008 and “dead-in-the-water” until 2011 due to financial difficulties, it’s a shame that with such a checkered past the film isn’t very good.

If you look at the timing of the film, it’s obvious that the producers were getting on the haunted/zombie/war train that had been started in  2001 (The Bunker), 2002 (Deathwatch), 2004 (R-Point), et al. Unfortunately because of delays and the above mentioned financial difficulties they missed the train completely.

Granted there doesn’t seem to be a “use-by” date for zombie films so they have, in a sense, caught the caboose of that particular train. They just didn’t do very well.

With a cast comprised of actors taken from BBC and ITV sitcoms, cop shows and sundry drama pieces all doing their best American accents and filled in with a Finnish strongman (Jouko Ahola)  and a Lithuanian heart throb (Mikko Leppilampi), the film doesn’t do anyone any favours and probably would have been better off if money had never been available for its distribution.

Admittedly I recognised the two main English actors, Andrew Tiernan who looked like he needed to attend a few weight watchers sessions, and Mark Wingett who I have always been a fan of (ever since I watched him portray D C Jim Carver on ITV’s The Bill). The film could have done with more Wingett and less Tiernan. Tiernan also seemed to be of the opinion that in order to sound convincingly American he had to liberally sprinkle his lines with G**damn’s and M*****f****rs. Expletives aside, his accent wavered from New York to New Jersey to just plain bad.

Mikko Leppilampi who was the only actor who actually looked like he belonged in WWII is a real workhorse of an actor. He seems to have been working in Lithuanian films steadily since 2003. He has the sort of matinée idol looks that, I predict, will ensure he stays permanently employed in the industry. I think Hollywood needs to snap this fella up quick.

You may have noticed that I have not written one word about plot. That’s because there isn’t really a definitive plot.

The film opens with a series of shots dealing with men walking through a tunnel. They are mown down by machine gun wielding Nazi’s. One soldier survives and is dragged kicking and screaming into a room with a huge stainless steel table. He is operated on and before you can say the Zed word he becomes a zombie.

The next thing you see is a screen full of text stating that a special American Elite Force helped the Finnish army in a highly specialized mission. The test is left up on the screen long enough for you to reach for the DVD’s remote, because you think the film has frozen.

We are then thrust into the film.

I am being a little unfair about the subject of plot, I know. But the film is one of those where the sound effects, the music and the dialogue have all been mixed by someone on drugs or with such good hearing that they could hear the actors mumble their lines over the too loud effects and mood music.

I will put hand on heart and admit that I have not watched the entire film. I had to stop when it got two-thirds of the way through. By that time most of the extra’s that comprised the Finnish and American soldiers were dead and Wingetts character was long gone.  The winner of the Strongman contest had been turned into a zombie and the direction of the film was going downhill faster than a go-cart on speed.

The only two redeeming factors of this film was the presence of English actor Mark Wingett and  Lithuanian actor Mikko Leppilampi. Wingett because he is a good actor and Mikko because he shows that he can do a lot more than MC the Eurovision Song Contest.