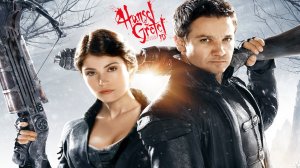 I watched this film with deep misgivings. I then realised that not only was I being unfair, I was, if nothing else, being hypocritical. I have always maintained that one should watch a film with no preset expectations. I had doomed Hansel & Gretel: Witch Hunters with an almost pathological distaste at the “high tech” weaponry and the CG that dominated the film.

You’d think I would have known better.

The film is a great big fantasy filled romp through Grimm’s fairy tale land. It is just gory enough to be very apropos to the original, much darker, version of the fairy tale, with an interesting twist. Written and directed by Tommy Wirkola (the talent that brought us the gloriously funny Dead Snow in 2009) it was a labour of love for him.

Turns out that Tommy had the idea for H&G:WH in film school (or media school, whichever you prefer) and apart from the fact that his teacher asked him to never approach him on that particular subject again, he did recommend that Tommy do a sales pitch on the idea if he ever got to Hollywood.

Which is exactly what he did.

Starring: Jeremy Renner, Gemma Arterton, Famke Janssen, and  Peter Stormare  the film has a good enough pedigree in the acting arena to at least guarantee good performances and the actors do a brilliant job with the limited character arc that their roles entail.

The plot (according to IMDb) is as follows:

Hansel & Gretel are bounty hunters who track and kill witches all over the world. As the fabled Blood Moon approaches, the siblings encounter a new form of evil that might hold a secret to their past.

The witch hunting duo use all sorts of way too modern weaponry to dispatch the witches they encounter (all for a price, despite this being a labour of love, they also charge accordingly – as Hansel says early in the film, “Trolls are extra.”) the film has no designs of being “historically” accurate. We are here for the fun of it and if you cannot get past the obvious updating of the witch hunters, the exit is clearly marked, or in my case, the eject button. 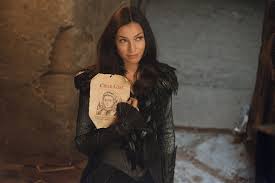 Famke Janssen rocks it as the witch “ruler” who has a personal score to settle with the witch killing pair. Although she really has it in for Gretel, who turns out to be  a white witch whose heart needs to be ripped out in order to make all witches the world over, impervious to fire.

Peter Stormare, does what Peter Stormare does best. He’s another distasteful oaf who’s the town sheriff and town bully. He dislikes H&G on first sight and takes umbrage that they are in his town telling him what to do.

So much for the plot and the characters, except to say the both Renner and Arterton have a lot of fun with their roles. But the combination of CG and practical FX help to sell this film. I spent the entire film thinking that the troll, Edward, was a CG creation and it turns out, he was not.

He is gloriously real (in a prosthetic sort of real) and only a modicum of CG was required. Even the witches flying on their version of broomsticks was real. The make-up and the stunts and the FX helped to make the film a glorious romp with no semblance to reality in the film. Well, apart from using a village set that does attempt to stay faithful to history.

Overall, this was a 4 out of 5 star film. I rated it so high because of Janssen and Storemare and Renner and Arterton. These actors went all out for their roles. Roles that could have been a straight two dimensional caricature had they chosen to play it that way. Sure they didn’t have room for a lot of depth, but it is a fairytale at the end of the day.

Great film, just don’t look for too much in the way of being faithful to the Brothers Grimm. 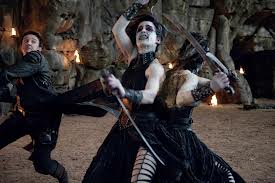 Directed by Robert Rodriguez The Faculty is a great picture that pokes fun at the relationships and politics in an average American high school. Even the location of the school is set in a state that is synonymous with average, Ohio.

The cast list for The Faculty is impressive, Elijah Wood, Josh Hartnett, Laura Harris, Clea Duvall, Selma Hayek, Famke Janssen, Robert Patrick, Piper Laurie, and Jon Stewart. Despite the heavy calibre of actors that Rodriguez worked with, at no time does the film lose its ensemble feel.

Rodriguez’s film has a very tongue-in-cheek feel to it from start to finish. And the film has not only aged well, but, it doesn’t lose anything with repeated viewings. I estimate that I’ve seen this film at least ten to twenty times and still get a kick out of it. Of course that could just be me.

The film opens with the football coach throwing a fit at his practicing football players. He shouts demeaning things at them as they depart the field to hit the showers. The coach (Robert Patrick) then turns the water bench over and stomps on one of the field’s water sprinklers. He kneels down and we see the shadow of someone approaching. “Yeah?” Coach asks snottily, “What.”

The next time we see the coach he is acting much differently. He corners the principal in her office, after asking her for a pencil, he then shoves it through her hand. After he takes it back out, he murmurs, “I’ve always wanted to do that.” Piper Laurie says the same thing when she stabs the principal later with a pair of scissors. As the title suggests whatever is going on at this school, it started with the faculty.

The rest of the film deals with an alien parasite invasion that completely takes over the school staff and is in danger of taking over not only the school, but the entire town. This film is a perfect example of why Rodriguez is such a good director. The story doesn’t lag and the pace is not so fast as to leave you gasping. Everything dovetails together perfectly.

Each character in the film is presented in a way to pull us, the audience, in. We feel an immediate empathy for these school kids who all remind us of kids we went to school with. The same can be said for the teaching staff. This is one film that has that perfect mix between script, actor and director. It is an eternal favourite in our house, in fact we just finished watching it again.

So if you haven’t got anything better to do, pop yourself some corn, open up a Coke or any other drink of your choice and watch it again.  I’ll bet you still enjoy it as much as the first time you watched it, or it you haven’t seen it before…What are you waiting for, go watch it.