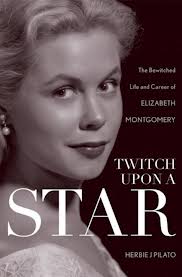 Like millions of people across the globe, I grew up watching Bewitched. Although, truth be told, it was not a favourite in our house, or at least if it was, it came on after my bedtime. I did watch it later on in its many resurgences on daytime telly as it was always (and still is, I believe) one of those shows that will be re-run fodder until the end of time.

I do remember the disappearance of actor Dick York who played Darren in the beginning episodes. His absence and subsequent replacement by Dick Sargent was never explained. If I remember correctly it was handled similarly to how they announce replacements in the American soap opera world; “the part of Darren will be played by Dick Sargent.”

It was almost like he’d died, York that is, and in those old halcyon days of pre-internet the information was not revealed to mere mortals like you or I. At least not to mortals who lived in the rural areas of Arkansas.

But regardless of who played the witch Samantha’s mortal husband, the show was entertaining and a wealth of young men grew up hoping that if they couldn’t find a witch like Samantha, they could at least find an Elizabeth Montgomery.

Later when Bewitched finally shuffled off into that realm of reruns and (hopefully) reunions or at the very least a TV movie, Ms Montgomery moved on to other more challenging roles both in her work as an actress and as a person. The work side of things were documented by her body of works. Some of which I only found out about by reading this book.

I had no idea that my “ideal” woman growing up portrayed one of my “real-life” role models and literary heroes, the Pulitzer Prize winning Edna Buchanan.

Twitch upon a Star or “The Bewitched Life and Career of Elizabeth Montgomery: TWITCH UPON A STAR” which is it’s too long title, is written by Herbie J Pilato. Mr Pilato has written several books about television shows and series. This 472 page book serves as a fan’s ultimate pledge of love and devotion. So much so that he uses a grand total of 25 pages to preface and introduce the actual recounting of Montgomery’s life.

I will not say that this book did not inform, because it did. Unfortunately it informed too much of the same information. Repeatedly. While I was eager to read of the “trials and tribulations” of a woman who I felt was a damned fine actress (I’d seen her Lizzie Borden and this childhood ‘crush’ scared the hell out of me) I did not want to read the same information time and again in different chapters.

The book suffers from following no real chronological time line. It moves forward and backward throughout Elizabeth’s life and career. The information dealing with her marriages leapfrogs back and forth and does not adhere to events as they happened. Rather they pop up randomly based, it seems, on the tiniest of threads that Pilato feels makes the re-revealing of this information crucial.

While the tone of the book is one of reverence. (It appears to be Mr Pilato’s opinion that not only could Ms Montgomery walk on water, she was incapable of getting her feet wet) Pilato does try to infer that the woman was not a saint, but the inclusion of so many repeated variants of the same anecdotal reveals plunges the reader into stretches of boredom and disinterest.

I love “showbiz” biographies. Not the “kiss and tell” warts and all type of yellow journalism that would not look out-of-place on the cover of The National Enquirer (because enquiring minds want to know) but the ones that offer true insights to a great actors background or how they achieved their goals. The personal touches that make that face on the screen become a real person.

Or perhaps the “nuts and bolts” of what made them become a performer or a certain type of person. Something that tells me once about some incident or occurrence that shaped their lives or performances. Not repeatedly going over the same old ground again and again.

I was really excited to see this book on the Kindle list of Biographies. I always liked Elizabeth Montgomery and wanted to learn more about her as a person. Unfortunately the book relies far too heavily on old interviews done throughout her career; not only to “move” the book forward, but to repeatedly support some point that one of her friends may have made about her character.

Unfortunately this book was a hard slog to get through. I came close to giving up several times. The odd interesting tidbit of information was lost in the endless repeating of information and the stepping forward and then backward through the time line of her life.

This is a 3 out of 5 star book only because there were a few anecdotes that I’d not heard and there was the odd bit of information that almost made the sheer drudgery of reading the overlong and meandering tome worth it.

Recommended for only the most ardent Elizabeth Montgomery fans and then only those whose devotion can forgive such a wandering and unguided look at her life.