I waited impatiently for Amazon to deliver my copy of Light. It took them ages after first telling me that the marketplace seller had no more copies and that I’d have to order another one. It finally came on Saturday and I’ve now finished the last Gone novel.

It is bittersweet this final book. Not just in the way the FAYZ ends, but in the knowledge that characters that I grew to love and fear will never return. Grant drew portraits of his Perdido Beach kids that rang true, deep, and varied. They all seemed real, even the “moofs” who despite their super-powers were full of character and depth.

In Light, the kids have reached what they refer to as “the endgame.” It has become a battle between the gaiaphage who has taken human form in the shape of Diana‘s and Caine’s “love child” and is now known as Gaia. Gaia has all of the powers of the other “moofs” and is growing at an inhuman rate of speed.

Which is fitting considering that she is not human at all. Despite her human birth, she really is a product of the gaiaphage that is in reality a virus from another planet.

Sam and Caine join forces to defeat Gaia and the other super powered children gather to help the brothers to defeat her. Even “The Healer” Lana joins the ranks in the final battle.

Gaia decides to lay waste to the land in the bubble surrounding Perdido Beach to aid her in the quest to destroy the entire planet. The only thing she fears is Little Pete, Astrid’s dead brother. who has managed to survive his body’s death and remain in ethereal form in the FAYZ. Gaia calls him nemesis and she is terrified that he will take human form and destroy her.

As the barrier gets thinner and more people from the outside world witness the death and destruction taking place on the inside of the barrier, opinion goes against the survivors of the FAYZ. The retribution that Sam has feared from the very start now seems very real and if he survives the final battle with Gaia he will have to face his accusers.

Light brings an end to the Gone saga and like the rest of the novels, it entertains and excites. All the characters face their own personal Armageddon as the endgame reaches its inevitable conclusion. While the “good-guys” team up to kill Gaia, she relies on the help of her mother Diana and Drake ‘whip-hand’ Merwin (who still shares the same corporeal space as Brittney the religious zealot).

I will miss the entire crew, Sam, Quinn, Albert, Caine, Diana, Edilio, Astrid, Little Pete, Bug, Orc, Dekka, Brianna (the Breeze), Taylor, Jack and all the other guys and girls who make up the beleaguered and embattled citizenry of Perdido Beach. But the ending of their story is just as brilliant as the rest of the books and Grant gives us a 5 star dynamite conclusion.

If you’ve read the Gone novels, don’t miss this one. If you haven’t? What are you waiting for? Unlike Trix, Gone is not just for kids. 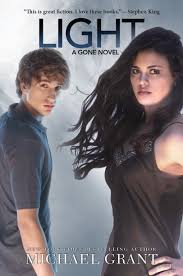