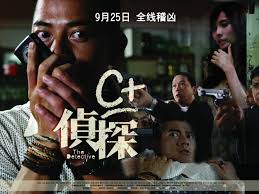 What do you get when you have a film that relies heavily on the film noir verse and then takes a sidestep into fantasy, horror and downright weirdness? You get Starfish Hotel, that’s what. I will just mention here that the giant rabbit costume worn by one of the characters actually creeped me out miles more that the one in Donny Darko. Although you can argue that the giant rabbit in Darko wasn’t in a suit.

Written and directed by John Williams (the current CEO of Tokyo‘s 100 Metre Films) in a move to presumably show that anyone can write and direct a film, Williams helmed this his third film. I am not sure that CEO’s of any company should give up their ‘day job’ if they churn out a film as confusing as Starfish Hotel.

That is not to say that Starfish is unwatchable, the reverse is actually true. I could not stop watching the film. Despite it’s meandering plot and story, it was compelling enough that I had to see it through to the end. I will be honest though and say that the main reason was the presence of Japanese actor Kôichi Satô whom I’d first seen in the superior horror film Infection (2004).

The plot revolves around Arisu (Sato) and an elicit affair he is having with another woman that he first met in the Starfish Hotel. He carries on this affair for years, each time returning to the hotel to meet his lover. The only other passion that Arisu has in his life is his enjoyment of a mystery writer’s newest stories. When they are published, Arisu rushes to get his copy.

The latest book is titled The Starfish Hotel and it appears to be about Arisu. In the meantime, Arisu’s wife goes missing and he has to find her. It turns out that she has been working in a brothel and someone has burned it down.

The noir-ish pattern of intermixing fact with fiction and fantasy does not work in this film, which is a shame. The film looks stunning. The colours create a moody and intense atmosphere and help to create a feeling of loss and confusion. But Williams introduces too many characters and lets them interact with too many people.

I found this film by accident on LOVEFILM and decided to give it a go. Like I said, it was a compelling watch. It was hard to follow and it got a little frustrating at times. It is by all means not the worst film I’ve seen this year, but it’s coming a close second or third.

You know a film hasn’t been received all that well when you cannot even find it on Wikipedia. I think honestly that the side stepping into J-noir hurt the film overall.  But again, I can only plead puzzlement over what Williams was trying to achieve with Starfish Hotel. I do know that I found it had to not watch.

It wasn’t the sort of ‘train wreck’ fascination that compelled me to stick to the end. It was more of a, ‘let’s watch just a little bit longer I’m sure it will all make sense soon.’

Unfortunately, by the time I got to the end, I was more than a little underwhelmed. All that painful interaction and subterfuge and dangling interludes just left me cold. Don’t get me wrong, I love film noir. To see how it really should be done just watch the Coen bros first effort Blood Simple (1984).

Blood Simple could be used in film schools as a template on how to make a darn near perfect noir thriller in any language. But I am wandering off topic here, somewhat like the film itself, and I wish that I could come up with an overall rating of  Starfish Hotel.  It falls into the category of interesting little film.

Just imagine that you’ve entered the local film store. As you go down the aisles looking for a film you haven’t seen yet, you spy a film hiding behind the rest of the DVD cases. Reaching back you grab the ‘hidden’ film and read the back cover. Despite the information printed on the back you decide to watch the film.

Because you found it. It wasn’t recommended by anyone, or panned, or reviewed by anyone. You just stumbled across it. That alone makes it worth watching. I found many ‘hidden gems’ this way. Sadly Starfish Hotel is not a hidden gem, but more of a curiosity as it struggles to find a genre that it belongs in.