The 2015 horror film Almost Mercy, directed and co-written by Tom DeNucci is one of those independent movies that could be considered almost perfect. Every single thing about the film works. The quirky plot, the music, the acting, the casting and the ambiance all come together to make this little film a veritable feast.

Starring Kane Hodder, Bill Moseley, Danielle Gulden and Jesse Dufault the film follows two misfits in a small Norman Rockwell town, on the surface, who become friends amidst their own personal suffering.

Gulden clearly owns this film. Her performance and voice over fits perfectly the character of the “strong twin” and at the end, with its surprise reveal, we believe her wholeheartedly. Jesse Default, with his “blasted” good cheer and slightly off-kilter expression convinces just as thoroughly. Kudos to the casting directors on this film, the young actors who portray Emily and Jackson as little children are spot on.

Eva Senerchia has only just started in the business and she has no difficulties playing the younger Emily. She has the expression of world weary acceptance that one sees in young neglected kids down pat.

It is Danielle Gulden who sells the film however. Her wry delivery as she recites events is brilliant. She is, despite her diversionary focus on Dufault’s character, the main protagonist. Her journey has insured that she is the sage messenger who reveals the truth behind everything in the end.

Horror icons Moseley (House of a 1000 Corpses, The Devil’s Rejects) and Hodder (Jason, Hatchet) play two “respected” members of the local community and the only complaint about either actor is that they do not have more to do in the film.

Moseley can be truly terrifying in whatever role he plays. Case in point being the 2010 thriller/horror film The Tortured. Moseley plays child murderer John Kozlowski who only really appears at the start of the film. Dressed in a child’s dress for what can only be a two minute or less scene, Moseley as Kozlowski could induce nightmares in the most mature audience member. More Moseley may not have been in keeping with the film’s message but more of this man is never a bad thing.

*Sidenote* Kudos to Bill for a majestic underplaying of what was essentially the “village” priest with a predilection for young male flesh.

The film comes dangerously close to entering taboo territory when it looks like Jackson will start a Columbine type massacre. This, had it actually been included as part of the film, would have killed the genius behind the music, the pacing and the clever dialogue of the players.

Cinematographer Sam Eilertsen does a brilliant job framing each shot and then editing the film without a misstep anywhere.

Rather tellingly, in the scenes where Hodder’s overbearing physical education coach is telling off young Emily for not bringing her gym clothes to class, a giant banner emblazoned with “Bullying” is just above and behind the child. Since these encounters take place in the same area where Coach Elwood picks on Jackson, the placing of this poster/banner is ironically brilliant.

The scenes with young Emily and Jackson and their “adventures” together are overexposed. Too bright, too saturated with color and difficult to view. The set pieces where Jackson is picked on in the gym dressing area, where three other boys gang up on him and whip him with towels is hazy. In both instances, it shows that the memories are perhaps incorrect, uncomfortable to remember or even altered from the reality of each situation.

DeNucci has excelled at what is his third time in the director’s chair. His background is exclusively in horror and this latest offering shows that this is his area of expertise. The script, the actors, the storyline and the feel of the film, right down to the choices of songs for each set piece, are almost perfect.

This is a 5 out of 5 star horror film. Streaming on US Netflix at the moment, horror fans should stop whatever they are doing and watch this film…Now.

This week’s episode of Z Nation features Bill Moseley in a pretty impressive cameo as the mad-as-a-hatter General with a hole in his leg and previews of the next episode shows that SyFy really did want to make a zombie version of Sharknado, in other words, Z Nado. Of course the show is not meant to be taken seriously and to give Asylum credit the series is entertaining in a campy and cheesy fashion. The producers of the show do not bother to provide answers to any questions raised by any particular turn of events. They are not there to provide logic.

It is surprising. Jesse Metcalfe who played the lovelorn cuckolding gardener in Desperate Housewives, the teenage satyr in John Tucker Must Die, is very suited to light comedy and it was a treat to see him in a role that required more of him than to just be good looking. Erika Christensen, I remember from the 2002 “teen Basic Instinct” film Swimfan. She played a transfer student with an unhealthy obsessional trait.

Bill Moseley‘s  name immediately made this a horror film and one that could be expected to contain buckets of gore. His character in both the Rob Zombie films as Otis Firefly, the elder brother of Baby, the violent sociopathic killer have pretty much stamped him, in my mind at any rate, as gory horror actor. 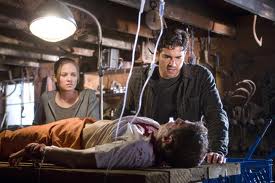 The plot is pretty simple. It is an “eye for eye” affair. Elise  (Christensen) and Craig  (Metcalfe) Landry have their six year-old son Benjamin snatched from their yard by John Kozlowski (Moseley). Kozlowski is a serial child killer who kills their son. He is, somewhat amazingly caught, but only after he has horribly murdered their son.

At his trial, instead of getting life with no chance for parol, he gets 25 years to life, which means he could actually get out on parole in 10 years. The Landry’s are beyond furious. They decide that they are going to practise their own brand of justice. They kidnap the prisoner on his way to another prison and take him to a cabin in the woods.

This cabin is not a Whedonesque type affair, it is just an old broken down property.

I will not go into the particulars of the rest of the film but the clue is in the title, The Tortured. And it does what is says on the label. I wasn’t surprised, but I was disturbed at the coldness of the camera lens. It dispassionately gets us up close and personal with the grizzly details and it makes for uncomfortable viewing.

I will tell you this, as a horror film aficionado, I did’t see it coming. The twist I had in mind, did not exist.

So good job by Marek Poseval who wrote the thing and to Lieberman who directed it.

Unless you are strong of stomach, I am as a rule, I watched it while eating my tea (dinner in the US). But even I could feel my gag reflex attempting to cut in a couple of times. 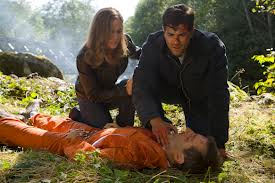