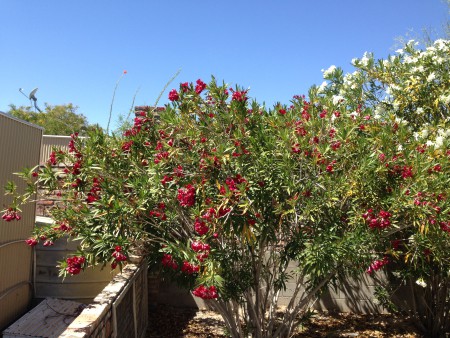 Whilst recovering from my altercation with a dark blue sedan and the curbside of Love’s Truck Stop, the real desert has been full of life and a profusion of flowers have surrounded me. Just on the property alone a wealth of pink and white flowers are sprinkled along the edges of the hardpan plot.

Blooms are sprouting from cactuses or cacti, along with the more traditional plant type bushes. The mesquite trees, which protect their yellow drooping flowers with thorny guardians, are filled with the sound of bees. These little pollinators are of such a number that their businesslike drone is almost deafening. Amazingly, despite the impressive decibel level that they emit, it is difficult to spy one.

The temperature in the local area has dipped, it initially became cooler around Easter and has not risen too much since. Handy if one is biking to and from town, but a bit chilly at night. Of course, as I am still recuperating from my accident, I’m not doing a lot of biking and most certainly not taking the 12 mile plus round trip to town and back.

Riding around the neighborhood and averaging about three miles per trip, I am pleased to note that in terms of control and exertion, my recovery is going very well. Unfortunately, the right leg still has a knot the size of Texas on the shin and at night, after a day of “limited” activity, both legs are painful enough that sleep becomes impossible despite pain pills.

Regardless of the amount of time spent getting better, and the lack of Internet access, life is limping along. Meeting lovely people who populate neighborhood, even as the general number of residents is in decline as it’s time for the snowbirds to migrate back home, and discovering that people can be kind and thoughtful and generous.

It has been an interesting time. Returning to the land of my birth has been…different. Moving from Las Vegas to Arizona has been almost foreboding. In terms of losing bits of myself, it has been frustrating and not a little annoying.

One week after arriving I lost my late father-in-law’s sweater. A favorite “in-between” garment that was a comfortable as an old glove. Taking a tumble, my first in the real desert, down a small wash, the thing went awol and I’ve never found it. Despite backtracking on the day it happened and searching the area repeatedly, the sweater has apparently departed to parts unknown and by now has most likely fallen to pieces.

Thus far, in a short three month time period, I’ve lost: A favorite sweater, hat, pocket knife, my prescription glasses, and my “cheap” reading glasses. Twice, not counting being forced off the car park surface by a car which would make it three times, I have fallen over while traversing the hardpan desert floor. Each time personal injuries were increased exponentially.

In terms of loss, television has become another missing component along with proper Internet. As someone who has spent a lot of time and effort increasing their profile on the net as a writer, both personally and professionally, this loss is the most devastating. Due to sporadic web access regular contact with my daughter has also been, temporarily, lost.

Entering the world of the self employed while relocating to a remote area of the Southwest has been an interesting move. Picking a part of the desert where there are no cinemas locally or nearby was not planned for and having no vehicle to attend screenings has been another “setback.” Rather annoyingly, most, if not all, the screenings from one studio rep are all over two hours away via car.

These “setbacks” are a bother but not overly so. Obstacles are made to be overcome. Time spent watching and writing about films and television is now spent writing the book I’ve promised myself for years. There are other books impatiently queuing up for their turn so I am still working. The biggest difference in this change of circumstance is the change in financial status.

This too shall pass and until then I will keep plodding along, writing, doing chores and healing and I will stop and enjoy the real desert flowers, while they last, on my road to recovery.