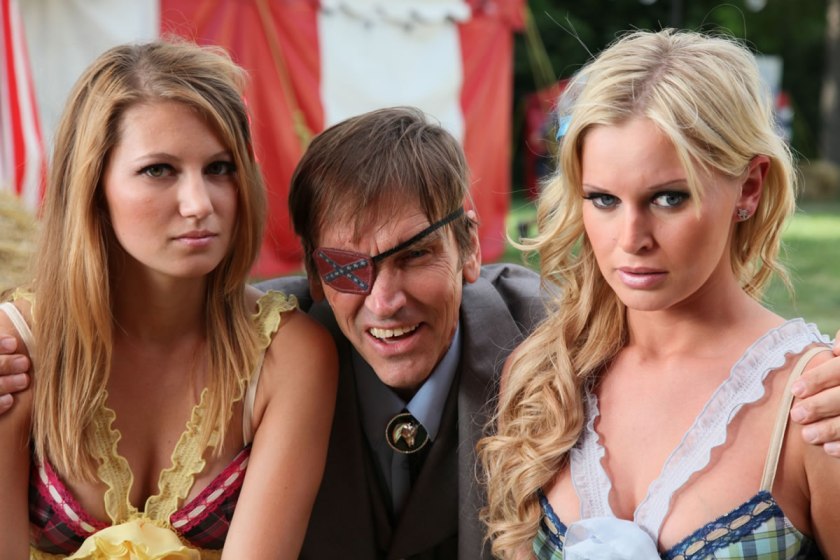 I do realise that  branding 2001 Maniacs: Field of Screams as the worst film ever leaves me open to all kinds of arguments. I will take the chance of having other people’s candidates for that “honour” thrown in my face, but, it is worth the risk.  It is very seldom that I find a film that I cannot watch all the way through. The follow up to the first campy horror film 2001 Maniacs with Robert Englund and Lin Shayne and the second in a planned trilogy, is worse than abysmal.

I would go so far as to say that it is execrable. Which is the nicest way I can think to put it.

The film was made on a budget of half a million and it looks like a lot less than that was actually spent on the making of this tragic waste of celluloid.

The first thing you notice when watching the film is the sound. The dialogue of each and every character, with the possible exception of Bill Mosley, sounds dubbed…by someone else. At times the actors lips don’t even match their spouted dialogue.  Even Mosley, of whom I am a huge fan, sounds like he has “looped” his lines after the fact.

The plot, such as it is, deals with the Civil War dead who occupy Pleasant Valley having to take their show on the road. Their source of yankee souls to take has dried up so they decide to have a travelling road show of southern inhospitality to collect the ration of northern victims required to allow them to shuffle off to hell or wherever Civil War ghouls go.

Mired in with this plot “twist” is the introduction of Rome Sheraton, no points awarded for guessing who she is supposed to be, and her sister Tina Sheraton. The two parties meet up in Iowa and together they drag the film even further into the barnyard muck that passes as a film.

I noticed that if you look up the film in Wikipedia, the link to an interview by Bill Mosley gives you an Error 404. Presumably he was so appalled by the finished product that he had it taken down. For the man who so effortlessly scared the crap out of audiences as much as he amused in House of a 1000 Corpses and the follow-on film The Devil’s Rejects he must be embarrassed to be associated with such dross.

As I mentioned above, I literally could not finish watching the film. It was so bad, I began to suspect that most of the actors and all of the crew were meth addicts or half-wits who had never made a film before.

I try to never outrightly pan a film, I usually try to find some redeeming qualities. Unfortunately 2001 Maniacs: Field of Screams have none. At one point in the film, Bill Mosley as Mayor George W. Buckman (get it?) gets an obligatory close-up, one of several, and the “scar” over his missing eye  has been so inexpertly applied that it is coming off and looks as fake and as hokey as the rest of the film.

I’ve reviewed abysmal student films that were better than this drivel.

Avoid at all costs. Getting poked in the eye with a sharp stick would be less painful than attempting to sit through this film. It would probably also be more entertaining.

I’ll finish this with a heartfelt plea to Bill Mosley, “Please, Please! Do not participate in  films like this anymore!” 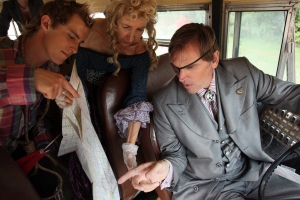