It  has been 43 years since I last attended the annual Lincoln Rodeo in the state of Arkansas. In the time period between visits, I have been overseas(for over years), married twice, fathered two children and only recently moved back to the country of my birth. The rodeo, which runs over three days, started on Thursday and as I am working on the latter two nights,  I opted to attend the first night of festivities.

Time has marched on for me since that last visit and time has moved on for the small venue as well. One particularly telling moment was the sighting of a young cowgirl, dressed in all her finery, texting on her iPhone while easily sitting and riding her mount.

It was a surrealistic moment which spoke volumes about the female of the species being able to multitask and the technology that these modern rodeo participants have access to.

(Sadly, I was not able to get a picture. Besides the sight momentarily throwing me, it was far too dark and using a flash seemed ill-advised.)

Arriving that little bit late, the first thing I did was grab a rodeo burger and a cup of rodeo coffee. A long standing tradition that dates back to my childhood. My late father always headed to get food the second we arrived at the rodeo grounds.

Another tradition involved getting new cowboy hats, boots and a rodeo shirt, all ivory poppers and with the long tails that kept the thing tucked in. While I did not sport new boots, or a brand new hat, I did have on one of my father’s old western shirts. Memories of attending the rodeo in days gone by flooded my mind as the smells of horses, cattle, burgers and freshly raked dirt caused a bit of olfactory overload.

Almost the entire event was spent in the company of my “cousin-in-law” who works for the same organization that I do. Good conversation, good vantage points and an overall sense of good bonhomie from the crowd made the night an entertaining one.

There were not as many people as there used to be and I seem to remember the grounds being much brighter in terms of lighting. Cowboy hats were not in overabundance, although I did wear my straw one along with my Cornwall western boots.

The rodeo has changed somewhat since my childhood. Girls were now competitively roping calves, which was the biggest difference, and the bull riders all wore protective helmets. One thing that has not changed, however, is the innate beauty of the young women riding their steeds around the rodeo arena.

Each one possesses a poise and incredible confidence that is displayed by  their expert handling of the horses they ride. Whether  moving around the grounds “backstage” or racing barrels, they are one with their mount and are pictures of grace and control. It is easy to be thrust back to one’s teen years and fall in love with these western lasses.

All had long hair that streamed down and out under their cowgirl hats as the rode hell for leather to beat the timer. While it was impressive to see, one could easily imagine that each one had extensions rather than naturally long tresses. It did not detract from the sight, but, like the iPhone texting rider, it seemed like it could be another sign of the times.

(It is also lovely to see the connection these young ladies have with their animals and family. One young rider was cutting tight circles around her father, on her horse,  just before heading out into the arena to do her bit in the barrel race. The amount of trust between the two was incredibly touching.)

Youngsters at the rodeo participated in a calf catching exercise (although they grabbed a flag off the creatures tail rather than actually wrestle with the animal) and it was a cute display that warmed the heart. There was also a goat roping event outside the arena…

All through the night the announcer kept the crowd informed about a line of thunderstorms headed the way of the event (which contained several tornadoes) and after things wound down the storms did finally arrive.

It may have taken me 43 years to attend a function that was a memorable part of my childhood and things might have been that little bit lowkey, but, it was an enjoyable night and one I would not have missed for the world.

The Lincoln Rodeo runs for two more nights and is an inexpensive way to spend an evening. The weather is meant to be a bit blustery but that only adds to the atmosphere.  Stop by and check it out if you can. 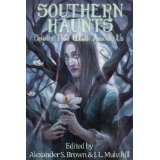 Edited by Alexander S. Brown and  J. L. Mulvihill; illustrated by Robert K and published by Seventh Star Press, this anthology of 16 ghostly tales range from Missouri to Louisiana and use real life locations to start each story off.

While some of the stories are not as entertaining as others, the introduction to new authors is an overall treat.  I also liked the different types of ghost stories on offer. Each is an original take on already infamous buildings, roads, and areas filled with southern  spooks and legends.

You won’t meet any chain rattling spooks or moaning ghouls a la Dickens, but you will find a very disparate group of hauntings in this “Down South” multi-locational collection of short stories.

You’ll be introduced to the soothing, healing bath houses of Hot Springs, Arkansas where you’d be wise to avoid one house in particular. [Bath 10]

There is a job opening for a new ghost hunter on an existing team that you may want to pass on to some other job seeking applicant.[Interview for a Ghost Hunter]

And there’s a certain Civil War hospital you wouldn’t want to check into. [The Top Floor]

Southern Haunts is just one of several anthologies on offer at the moment that give us a view of what lies out there just waiting for us to discover it. It is full of variety and has something in it that should appeal to everyone who loves this genre.

This book is available on Amazon.com and other booksellers.

A 4 out of 5 stars for me based just on the variety and the setting. I am, after all, a southern boy who loves his southern ghosts!

A quick thanks to all who supported me during my heart attack and after. Plus a very quick word about the film Madison County!

Madison County is a low-budget “slasher” horror film that was filmed in and around Russellville Arkansas. Written and directed by local boy Eric England, the film looks good. The production values are incredibly good, no doubt because England shot the entire film on the Sony Red digital camera.

I’ve written about the Red before in an earlier post: Film-making, the Times they are A-Changing. Monsters (2010). I was most impressed with the ability of the film-makers on Monsters who used the Sony Red exclusively on their film and actually used common software to edit the film in their hotel rooms while on the shoot.

I have no idea whether England did the same, but his film has the same high quality look as Monsters. Also, for a low-budget horror film, the sound is outstanding. Phillip Bladh who was the production sound engineer did a superb job of not “drowning out” the actors with the soundtrack.

My only complaint about the sound was the ADR which sometimes did not completely match the actors when they were speaking. This did not happen often enough to be really noticeable but it did show, perhaps, some of the actors’ inexperience with the whole “looping” process.

The film opens with an homage to Tobe Hooper‘s 1974 film The Texas Chainsaw Massacre. This opening shot told me two things: 1) That the director was a horror fan, and 2)That this film was going to be a ‘cut’ above the rest of its low-budget peers. I was not wrong. While the film received mainly negative reviews when it premiered at the LA Screamfest; Dread Central gave it an overall favourable review with a 3 out of 5 star rating. *Screamfest and Dread Central information courtesy of Wikipedia.*

The film follows the story of a group of college kids who are travelling to Madison County to interview the author who wrote an account of a local serial killer.  When they reach the area that the writer lives in, they stop “in town” for directions. They go into the local general store/gas station/diner to get information on the writer.

The lady running the diner tells the kids that the writer doesn’t live there anymore and that local folks don’t care too much for outsiders. One of the funniest lines in the film occurs in this little exchange. One of the boys asks if the whole town suffers from “staring disease” as the full diner’s occupants all stop and stare unabashedly at the group when they enter the premises.

The scene outside and in the diner also seemed to give a nod towards another film dealing with the vagaries of the south and its denizens, Deliverance.

Once the group go off to find the writer, we reach the heart of the story and the action. Nothing too blazingly original here, but England’s choice of location serves the film well and the introduction of a “pig-headed” serial killer (with one eye staring off to the corner of its socket) is a great touch and the actor who played the killer Damien (Nick Principe) does a great job interacting with his victims.

And now that I’ve mentioned one of the actors, here is the entire cast list:

Despite an ending that was “signposted”, the actual end of the film did surprise me a little as it came from a quarter not entirely expected. This film definitely did not deserve the negative reviews it received, I’ve seen much worse (just in the area of production quality alone, we won’t talk about sound) and in fact watched two films prior to Madison County this evening that were pure unadulterated dross and this  was head and shoulders above these films.

The lead protagonist James is played by another local lad, Colley Bailey; this was his first feature film and he did a passable job. He must be doing something right as he is still working in the industry. The whole cast acquitted themselves admirably on a location that must have been full of ticks, poisonous snakes and spiders and incredibly rocky terrain.

That section of Arkansas has more ornery critters per square inch than most other locations in the US. It also has an overabundance of rocks; ask any farmer. I probably enjoyed the film more than most, because it was filmed in an area just 2 hours away from where I grew up. This “inside” knowledge of the surrounding area increased my viewing pleasure.

My final (and slightly biased) verdict for the film is a 3.5 stars out of 5. Mainly for the pig-headed killer and the excellent production values of the film. I could not find an estimated budget for the film, but I am very willing to bet it was way under the million dollar mark. Yet the film does not look it or sound it. A great popcorn movie of the southern slasher variety.