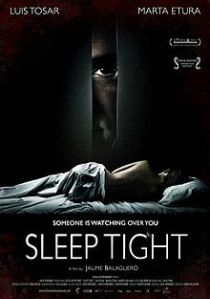 Directed by Jaume Balagueró who is the man behind REC, REC 2 , Fragile, and Darkness; so his bona fides in the horror/thriller genre are beyond question. He has not disappointed with his latest entry into the genre with Sleep Tight. Even with such an impressive pedigree of horror films under his belt, Wikipedia states that this is the first film that Jaume has directed solo since the 2005 horror/thriller Fragile.

Concierge Cesar appears at first glance to be the capable and ever helpful  sort of man who has everyone’s best interests at heart. We soon learn that this facade is paper thin and he only wants to spread misery and unhappiness amongst his charges. He develops an obsession with the eternally cheerful Clara who has thus far resisted his attempts to wipe the ubiquitous smile off her face. He goes to great lengths to ensure that her life is ruined. This spreading of misery is what truly makes Cesar happy and he will stop at nothing to reach his goal.

Cesar uses his position as the apartment’s Concierge to gain access to all the tenants private lives.

Cesar himself is the twist, but you will ask yourself, was the woman in the hospital really  his Madre (mother)?

Cesar is a real piece of work. He has a smile for everyone and is pleasantly charming while he weaves his nasty spell. Señora Veronica is a older single woman who has dogs instead of children and is lonely. Ursula is a nosey and perhaps younger version of Cesar; she knows what he’s doing. Clara is the beautiful, friendly and eternally optimistic tenant who Cesar wants to ruin. He feels that his life’s purpose is to share his pathological unhappiness with the world.

Watching this film, I could not help but make a connection between Cesar and Stephen King’s milkman, Spike Milligan, in his short story Morning Deliveries. Both this film and the short story created the same feeling of unease crossed with distaste bordering on alarm.

This film kept me on the edge of my seat. Halfway through the film, it became almost unwatchable as Cesar gets more and more daring in his pursuit of unhappiness for Clara. There are some scenes towards the end of the film that had me clenching my teeth and white-knuckling my chair. The suspense was nigh on unbearable and the tension was excruciating.

All the actors did a marvellous job selling their characters. Louis Tosar, who made me think so much of Joaquin Phoenix that I began to wonder if they were indeed brothers, as Cesar was beyond brilliant. And Marta Etura kept up her end of the acting bargain. Even the little girl who shadows Cesar’s actions does a superb job. Actor Alberto San Juan who shows up towards the end of the film as Clara’s boyfriend Marcos also does a more than adequate turn in the limited time given to his character.

This was a real 5 star film filled with slow moving Dionysian pathos and unbearable tension as we wait for Cesar to get caught, arrested or killed. If this the work that Juame Balagueró is capable of when he directs solo, they should let him do all his further projects alone.