Just when it seems like Saturday Night Live has lost some of its panache regarding guest hosts, they trot out Jonah Hill who then has a Leonardo DiCaprio bromance moment. Not to take away from Hill’s monologue, which you can see in the video below, because Hill was doing what he does best, being the big little man everyone loves to bust on.

Published in 2010, The Nicest Fella is about one of the last of the cowboys. Ben Johnson was not just a “screen” cowboy, he was the real deal. Growing up in Oklahoma  Son, as he was known to family and friends, earned his spurs on the back of a horse before doing so on screen.  Johnson came to Hollywood to deliver horses to the film industry at a time when westerns were all the rage and the demand for horseflesh was high.

After discovering that he could make more money in a single day than he could for an entire month working on a ranch, he decided to stick around and began doing stunt work.  He worked a lot with another stuntman who became an  actor in his later years, Richard Farnsworth who was later nominated for an Academy Award for his role in The Straight Story. Ben would actually win an Oscar for his work in the film The Last Picture Show, which he referred to as a dirty movie because of the cursing and nudity in it.

Richard D Jensen does an excellent job chronicling the life and times of one of Hollywood’s greatest character actors. He had an enormous amount of help from Helen Lee Johnson Christenson, Ben’s sister, who had collected over 30 years worth of information on her famous brother. Jensen himself met Johnson in 1984 at a film festival and the two got on so well that they ditched the festival and spent the evening at a cafe talking. Jensen says that it was then that he knew he would write about Johnson one day.

The book goes back to Ben Johnson’s own famous father Ben Johnson Sr. A rodeo champion and manager of the largest ranch in Oklahoma, he was well known and well respected. Ben Jr, or Son, new that he would have to do something different from his father if he wanted to make his own tracks in the world. Although he would later return to the rodeo world and attempt everything his father had done as a sort of catharsis.

When Johnson first came to Hollywood, the industry was still in it’s infancy. He was not the only real cowboy in the industry. In fact the famous Tom Mix had not only started life as a cowpuncher, but he had worked on the same ranch as Ben Johnson Sr.

Ben Johnson was the last of the cowboys though. His code and moral stand stayed saddle bound his whole life, He did not hold with using foul language in front of women or children and he would stop others from doing so. This same “code” meant that he continually attempted to get Hollywood money funnelled into his home state to help those who needed it.

The title of the book came from paraphrasing Johnson’s acceptance speech for winning the Oscar in 1972. At the end of his very short speech, he announced that what he was going to say would cause  a lot of conversation but, “It couldn’t happen to a nicer feller.”

He was right. What the book shows is that very few, certainly not any in the book, had an ill word to say about the man. The cowboy turned stuntman; turned actor; turned rodeo star  and back to actor, was a man of his word and had time for everyone. His strict moral ethos gave him the strength to stand up to notorious bully John Ford, and it says volumes about Johnson. Even more so that Ford, later in his career, would talk Ben into working in The Last Picture Show. If Ford had not “pushed” Johnson to do it, he would have kept turning the role down.

At 299 pages, the book is not overly long, but after biography finishes, Jensen has one of the most complete filmography’s I have ever seen. This was a monument to a great man and the author has laid his foundation carefully and built a wonderful bio of a brilliant character actor. 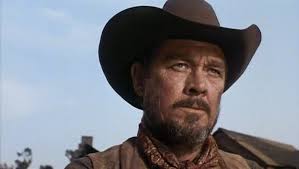 If you are a fan of westerns, you’ve seen Mr Johnson in countless roles in films that range from John Ford’s epic paintings  to Sam Peckinpah‘s brutal realism. Well known as the “sidekick” of Duke Wayne and the best horseman in Hollywood. It is a wonderful read and definitely a book for anyone who is a fan of this excellent character actor.

I have to give this a five out of five stars just because Richard D Jensen does a brilliant job and he is the only writer who has taken the time to write a Ben Johnson biography.  The book is available from most book sellers, but sadly, is not in an ebook format.

Life of Pi was finally published in 2001 by the Canadian Publishing House Knopf Canada. Finally, because it had been turned down by no less than five London Publishing Houses before Knopf stepped in. (Wikipedia)

I had never heard of the book and only became aware of its existence when I saw a trailer for Ang Lee’s film version. I would not have noticed it then, but for the fact that English actor Rafe Spall was in the trailer and as I am a big fan, I paid close attention to it.

My daughter told me that the Ang Lee tim was based on a book and it was put on my “to read” list immediately.

Like all other things that suddenly appear in our everyday peripheral vision, the book as well as the film, quickly faded into obscurity; overshadowed by other events that were forefront in my mind. The film was brought back to my attention when Ang Lee won the Best Director Oscar at the 85th Academy Awards.

After that, I kept my eye out for a copy of the book, either in the Library or to purchase. I found the book on Amazon Kindle for the obscenely low price of 20 pence (that’s about 50 cents in American currency). I could not turn down such an offer and I downloaded it and read it in one day.

At 326 pages the book is not overly long and the pace and writing style is brisk enough that it can be read very quickly. Of course the content of the book also guarantees that the reader is loath to put the book down for even the briefest of moments. Suffice to say, that Yann Martel had me on the first sentence of his Authors Note of the book.

Life of Pi follows the life of the writer (Martel, but only as the narrator and chronicler of the main character’s story) and Piscine Molitor “Pi” Patel. Pi starts his life in India and his father runs the local zoo. Pi is a curious young man who, in his quest to learn about God, practices three separate religions at once. It causes a small amount of friction amongst the holy men of his town, Pondicherry, but his lessons from each theological belief stands him in good stead later on.

Due to financial difficulties, his father decides to sell the zoo and the animals. He also decides that he and his family will accompany the animals on their sea journey to Canada. After the ship sets sail, it sinks with no warning and only Pi is left alive. He takes refuge on one of the ships lifeboats which he shares with a hyena, a Zebra, and orangutan and a Bengal Royal Tiger named Richard Parker.

We accompany Pi on his journey and witness the oddities and hardships that he faces while adrift in the sea. He has a “fantastic” voyage and we are privy to all of it.

This “fantasy/adventure” story, that was almost never published, is one of the most fascinating and entertaining books I’ve read in a long time, not by a favourite author. Like most avid readers, I have my “stable” of authors that I will return to again and again. Not just because I like their stories, but I like their writing style and their little touches that make a tale come to life.

Yann Martel has now found a place on my favourite author list, quite high up actually. His way of moving a story forward and letting us into Pi’s world and his beliefs are almost poetic in nature. For the entire length and breadth of the book, I felt that Pi and his adventures were real, just waiting to be revealed as some outlandish truth that could be verified via the internet or some dusty old tome in a library. Such was the power of his writing.

I will, of course, now have to see the film. I can only hope that Ang Lee has managed to capture the scope and the fantastic element of this brilliant tale. If you haven’t had the pleasure of reading Martel’s wonderful book, I’d recommend taking advantage of the 20 pence (or the monetary equivalent where you live) bargain price and read it.

I know that this is a book that I will read again and again.