I fell in love with the star and this film when I first watched it. Its a superior martial arts film and a hell of a lot of fun to watch. 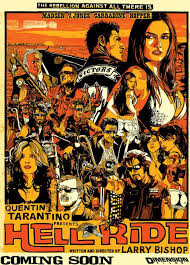 Written and directed by Larry Bishop (son of Joey) Hell Ride is an apparent homage to the Roger Corman Biker films of the 60’s and 70’s. The “original” biker films were cheap, loud and full of bad acting and great moments. *who can forget a mortally wounded Bruce Dern in The Wild Angels asking as he dies, “Does anybody have a straight cigarette?”*

Unfortunately Bishop’s homage, while it looks good, does not contain any “great” moments like the old 70’s films. You can call Roger Corman many things, but corny wouldn’t be one of them.

Hell Ride has a good cast:

The film looks like a part of the “Grindhouse” flicks that Tarantino and Rodriguez put out in 2007 and appropriately enough the idea came about when Bishop was working with Tarantino on Kill Bill 2. While the idea might have been a brilliant one, the actual execution left a lot to be desired.

I’ll start by saying what I think was wrong with the film. Firstly, all the leads seemed to be doing their best Clint Eastwood impression. It was all clenched teeth and guttural whispering of lines; even the females. Everyone, that is, except Michael Madsen who played his character like…well, Michael Madsen. If ever there was an actor who could be considered a “one-trick-pony” it is Madsen. Don’t get me wrong, I like Michael, but there is a reason why he doesn’t work that much. There are only so many films that need a Michael Madsen character.

The bikes all looked great, except for the chopper that Madsen rode, it looked like it belonged to another biker and he’d borrowed it. It just did not fit.

The other “problem with the film was the dialogue. It tried too hard to be “cute” and amusing. The blame for that lies squarely on the shoulders of Larry Bishop. It’s obvious that his father (who was known as a “comedians comedian”) was a comedy writer and comic. Where these type of lines, “It’s a business. Speaking of business. How’s business” (Spoken between David Carradine and Bishop) reeked of last generation “smart ass” humour that did not fit in the realm of the biker world.

The locations were fine and in keeping with the Southern California setting that the original biker films favoured. But that was about the only thing the film had going for it.

Eric Balfour as Comanche/Bix/Sonny/Son was pretty much wasted in his part. I’ve already groused about Madsen, so we won’t mention him. David Carradine was seen too little. Vinnie Jones was miscast and seen too much. Dennis Hopper was, as usual, great; Hopper cut his teeth on the Biker Genre a’ la Easy Rider. Larry Bishop? Well, suffice to say, if he hadn’t written the damn thing and gotten Quentin to produce it and had Bruce Willis drop out as the lead, he wouldn’t have had to “star” in the film at all.

And that would have been a good thing.

Speaking of good thing (s): the score was boss. It fit the mood and the feeling of the old biker films, but, a good score does not a good movie make.

The final verdict? Crass, crude, creative-not, cinematic chaos. Poorly acted, poorly edited, and poorly received (by me). If you want to re-live the madness that was 60’s and 70’s biker films, watch the real deal, check out the originals and don’t waste your time on this one.

2 out of 5 stars and that’s only because of Hopper and Carradine’s presence.

Directed by  Colin Eggleston (b:1941 – d:2002) Long Weekend is a piece of low budget genius.  This was only the second feature film helmed by Eggleston and despite the fact that the film bombed in Australia, it went on to win five awards. Part of the reason the film did so badly was probably down to the public placing it in the category of “Ozploitation.”

John Hargreaves and Briony Behets play Peter and Marcia a young urban couple who are going on holiday. We notice very quickly that Peter and Marcia are a “chalk and cheese” couple. Peter has decided that they are going to ‘rough it’ on a beach in the outback. Marcia has her heart set on staying in a nice hotel somewhere. Somewhat begrudgingly Marcia agrees to try the camping trip idea, but with the proviso that if she really doesn’t like it they can spend the rest of the holiday in a hotel.

From the minute they get into their Jeep and start driving, we the audience can feel the tension between the couple. This tension fluctuates through most of the film and even before Peter runs over a ‘Joey’ leaving it to die in the road, we get a sense of foreboding. A feeling that this trip is not really a good idea.

Long Weekend is mostly a “fish-out-of-water” film. Peter and Marcia do not belong in the countryside.  City dwellers first and foremost they really have no idea what they should be doing once they reach their ‘supposed’ destination.  On their way to the beach they get lost, mainly because the locals at the petrol station do not go out of their way to give them directions, but also because they are careless.

Both Peter and Marcia have a complete disregard about the wildlife they encounter and it’s  natural habitat. John Hargreaves as Peter shows us a man who is basically selfish and immature. He thinks nothing of killing the local flora and fauna or leaving his litter scattered about the previously pristine area.

Brioney Behets (who was married to the director at the time) gives Marcia an edge, a feeling of loss and the willingness to bridge the distance between her and Peter. Initially we sympathize Marcia but unfortunately she suffers from the same problems as Peter, selfishness and immaturity. She also has little respect or knowledge of how the countryside works. They are both completely out of their comfort zone and it shows. But only Marcia is smart enough to vocalise her fear and distaste of the great outdoors.

The only time in the film the two characters unite is in their mutual fear of a huge black shape in the water. Marcia hears a downright scary cry or call from an unknown animal. She goes down to the beach to tell Peter and she sees the black shape moving towards him. Marcia begins screaming hysterically for Peter to get out of the water. Peter, in true urban fashion, shoots the black shape repeatedly.

I can honestly say that when I first watched this film, it made me so uneasy that even I did not want to venture into the great outdoors and I grew up there. The sense of foreboding that we feel at the beginning of the film hits fever pitch after the couple arrive at their destination.  When nature begins to exact a toll from the couple for their criminal behaviour, fever pitch rises to a frenzy.

Long Weekend was remade in 2008 and it is almost a complete frame for frame re-imaging, of the original, but the remake, believe it or not, cranks up the action considerably. It is one of the few remakes that I enjoyed as much as the original.

But I leave you with one request, if at all possible, watch the original first.