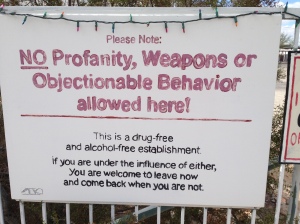 After promising to write about all the Navajo-horse-blanket-jacket-wearing hippies who were frequenting Quartzsite in my Life in the Real Desert “series” they all seem to have disappeared. This leaves the question of just where did all these hippies go? There are still a number of Desert Rats hanging around, but that number has dwindled as well.

The hippies were pretty easy to spot. Horse blanket jackets, dreadlocks – regardless of skin color or nationality – a lot of body surface dirt, a tendency to avoid sunblock, no shoes, some pretty “crusty” looking clothes  and they moved in clumps. (The hippies, not their clothing.) Like most members of any particular branch of society, some were friendly and others only wanted a hand out.

One bearded young man, with his wife(?) and two small children drove a station wagon, or an estate if you live across the pond, that had a sign painted on its side asking to be funded in order to allow for a vehicle upgrade. Many locals were/are not too enamored with these throwbacks to the 1960s and 70s “love children.”

This attitude is a little ironic considering that a lot of the vendors who sell their wares in the small burg seem to be remnants of the real deal from back in the day. Tie-dye t-shirts, raggedy trousers or long skirts, again dyed, along with any number of ribbons. Of course just as many of these sellers look like escapees from Cool Hand Luke territory complete with reddened neck and southern drawl.

Like any small community, even one made up of nomadic snowbirds who flock in and out, the “regulars” soon spot a new addition who has stumbled into something resembling citizenship of the town. Example: I sound a bit different when I speak. After years of listening every day to the Queen’s English, both at home and at work, I struggled to maintain my American accent, on my old agent’s advice.

Now that I’m not in that market any longer, my accent has changed to reflect my 32 year background. A young lady at the local Burger King, home of excellent free WiFi, asked about my background and another female worker quickly explained that “he comes in most every day.”

Without missing a beat she turned to me and said, “I just love your accent!” To which I replied, “Why thank you, it took me 32 years to learn.” The point is, that even frequenting a local fast food establishment, recognition comes quickly. As this is a small town, one can expect this familiarity to become a regular occurrence as time goes by.

Now that I’ve noticed that the hippy contingent has disappeared, the time has come to ask the locals if this is normal. Considering the amount of cold weather, for the desert that is, perhaps they all moved to warmer climates like Mexico for example.

For those who were positioned along the intersections near the highway,cardboard signs grasped and thumbs pointed, the numbers have dwindled until only the odd “rat” is hitching a ride. When I first arrived, one “hippy” had a sign with the destination “Anywhere but here” written on it. Another’s said, “Out of Quartzsite.”

I had talked to one young lady who told me point blank that the town was not friendly and that she’d almost gotten in a fight at the local food bank. Not for her, she said, she was sticking up for an elderly lady. As a result, she lost the vittles collected for her and a friend. The twenty-something woman stressed that Quartzsite would not be on their list of places to visit next year.

This information has already been passed along in an earlier article but bears repeating considering the lack of “flower children” in the town. It seems a shame that they’ve disappeared. There was a group who hung out in the shade of a local “hardware” store. They interacted with an old soul, who had a broken leg, that had staked out the shade of a solitary tree on the same lot.

The young people sat in the dirt and sand, eating what they had scrounged and chatted amiably amongst themselves. Speaking, if spoken to and not behaving in a threatening manner at all. Quite unlike the Desert Rats who can be, at first glance, a bit intimidating to the older snowbirds in town.

One Desert Rat dresses like a modern day Robinson Crusoe. On his head is a sort of crumpled tri-corner hat, obviously self-made. He wears a khaki jacket,  what looks like either a skirt or jeans with the legs split open and combat boots. He has black hair and a black beard shaped into a long point, it actually looks like something the devil would sport.

He has some sort of bag, or wrap, around his middle that he keeps covered from the sun. His skin is the color of old teak and mahogany and only the lightness of this legs give clue to his being caucasian in origin. A fascinating chap to look at and one that many people moved away from as he approached. Being on the opposite side the main street, I could not tell if it was appearance or odor which made him an object to be shunned.

The Hippies, or travelers as I prefer to think of them, may have disappeared for now and while I have no idea where they have gone, I do miss them. They were all young and seemed to be pretty much carefree. The young wives or girlfriends were pretty and friendly and did not disturb anyone that I could see. Perhaps they will be back.

Until then, once I put together my replacement bike, which could take some time since there is a wheel nut that does not want to loosen, I’ll continue my explorations of the local area and write more about the interesting little burg that is Quartzsite. I have my cousin Kenny and his delightful wife Carla to thank for reminding me that the area here is full of history and deserves to be written about.

11 thoughts on “Life in the Real Desert: Where Did All the Hippies Go?”