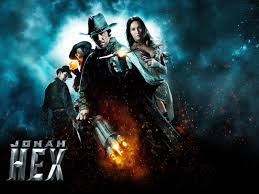 I finally got to see this film last night and I will say upfront that, despite having “toe-thumb” and plastically enhanced Megan Fox in it, I kind of liked it. Of course there was a slim chance that I would as it has three of my favourite actors in it; Josh Brolin, John Malkovich, and Michael Fassbender.

I was actually surprised to find that I did like it. The film has been almost universally panned from its release. I am not sure if that is because of die hard fans of the original comic not liking it, or something else. Admittedly the film is a bit choppy in the continuity of story department, but, the prosthetic on Brolin’s face that helped to transform him into Hex was brilliant.

The story, which is based on the DC Comics of the same name, deals with civil war soldier Jonah Hex who refuses a direct order from his commanding officer Quentin Turnbull (Malkovich) that results in his (Turnbull’s) son’s death. As punishment, Turnbull, makes Jonah watch his family die in front of him and gets branded on the right side of his face with Turnbull’s branding iron (QT).

Jonah is nursed back to health by a Crow Native American Indian tribe and his time spent in the world of the dead leaves him with the power to make the dead talk. He searches for Turnbull and finds out that he has died. He then becomes a bounty hunter, punishing the guilty. While doing this job a bounty is put on his head. Meanwhile, we find out that Turnbull is not dead, he’s just gone homicidally mad and is planning to start and finish his own brand of civil war.

I thought all the actors, even Megan Fox as Lilah, did a great job. Their performances sold me on this western/fantasy/action film and I never once felt like I was not enjoying it. This may have something to do with the fact that, apart from the title, I’ve never read the comic. Because of this I did not go into the film expecting anything. I just watched it and rather enjoyed this farfetched fantasy take on the civil war story.

I decided to take a chance on the film when I saw it on sale in my local Tesco Extra Store for £3 (about 5 bucks American) and felt that at such a low price I wouldn’t be out very much if I didn’t like it. But since I did enjoy it, it’s now a bargain. The film looked great, the CG and the scenes leapt out at you and the film looked like a western; a big selling point for me if it’s meant to be a western, cross genre or not.

The really big surprise was that I liked Megan Fox’s character. As a rule there has only been one other film where I really liked her performance and that  was Jennifer’s Body the 2009 horror film. She really doesn’t do much for me, especially after finding out about her plastic overhaul. *Not to mention those “toe-thumbs,” shudder.*

I’d have to say that this fantasy “oater” is a good popcorn munching film of the”mindlessly entertaining” sort. So I’d have to give the film a 4 out of 5 stars for managing to make Megan Fox look good in a film. Of course having Brolin, Malkovich, and Fassbender gives it an extra star as well.