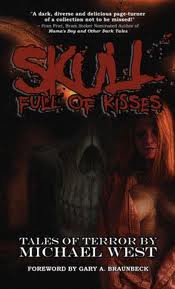 Skull Full of Kisses is a ten story collection of Michael West’s short fiction. I can tell you know, that if you go to read this collection, you will find no two stories alike. Each and every one is different, unique and damned scary.

There is a short story in there for everyone.

Interested in Japanese culture? Fascinated by the Yakuza and Japanese Demons? Well Jiki will be right up your alley or basement, in this case.

West gives us glimpses of the horrific haven of Harmony, Indiana and a look at the Lovecraftian village of Colonial Bay; where you definitely don’t want to ask the question – What’s a nice girl like you, doing in a place like this?

There’s a great little place that’s just out of reach in the desert unless you take Einstein’s Slingshot; a one-way ride into the realm of nightmares and things that like human flesh.

If you ever dreamed of being an astronaut, you’ll want to avoid the story To Know How To See, which feels like a Twilight Zone episode with tinges of The Outer Limits.

While I’d love to set here and give little “teasing” clues about what is in the book and the themes of each story, I won’t.

What I will do is urge you to read these…quickly…while with friends…and in the daylight. If you attempt to read these alone, slowly, or at night, you might just have bad dreams. Or more correctly nightmares.

When Michael West tells a scary story, nothing can be considered safe. Not even your loving girlfriend who never wants to let you go (For Her).

At the beginning of this post, I said that all the stories were scary. I will hold my hand up and  admit that this is a lie. I will not divulge the title of this particular tale. I’ll let you stumble upon as I did, by reading this collection. It is, I think, my favourite and no, it is not scary in the traditional sense, but is it very good.

West has a little “afterward” in his collection where he talks about what gave him the idea for each story and when it was originally published. It is a fascinating look into the mind of a horror writer. He warns about not reading this section before you read the stories as there could be spoilers hidden there.

I would listen to him. If you skip to the back, he might find out. And, I don’t know, you could wind up in one of his stories.

Now where I might find that entertaining (there’s nothing worse than one of those people who jump to the back of the book) if you are one of those people, I cannot think of a better punishment. Because as much as I love being scared by West’s scary denizens in his stories, I’d hate to have to deal with them.

Another great addition to the Michael West collection I already own and I will now wait (not so) patiently for his next offering of terror.

A real 5 out of 5 for creative and non-repetitive horror. If this collection was a musical instrument, it would be the Stradivarius of its peers; playing with a deeper and more resonant sound than other stories in the genre.

7 thoughts on “Skull Full of Kisses by Michael West: A Short Story Stradivarius”